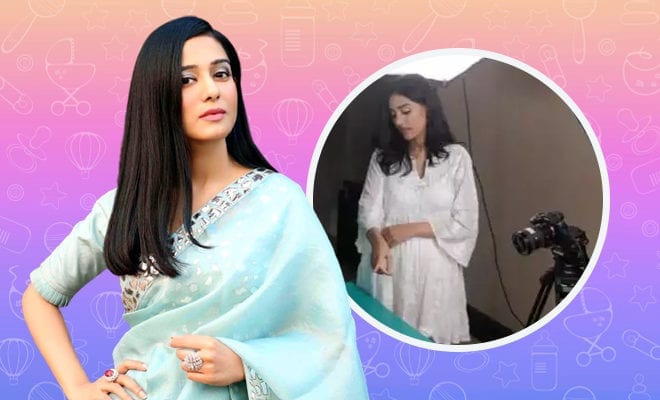 Amrita Rao Said She Always Wanted To Be A Working Mother, As She Resumes Work Post-Pregnancy

My mom has been a homemaker and I know that managing a family and three daughters is not an easy task. It is a full-time job and yet, it doesn’t get the dignity of being recognised as labour because it comes out of love and not commercial interests. As much as I respect women who take up the job of managing the house and her family, I do feel it is very important to have financial independence. And it’s not always about the money, though it is a lot about that. It’s about getting the exposure that helps you evolve, having goals that stimulate you and a work/social life that keeps you occupied. This is probably why, new mom Amrita Rao is so excited to be back to work.

The actress who was blessed with a baby boy last November was finally out and about for her first shoot post-pregnancy. Amrita Rao is fully motivated to nail her mommy duties and work duties wholeheartedly! She shot for an advertisement recently, with all safety measures in place. The crew was of just five and they had tested negative for Covid 19 before the shoot.

Talking about how excited she is to be a working mother, Amrita Rao told ETimes, “I have always wanted to be a working mother thanks to the right precedent set by my mom. She did not give up her career after I was born. She has balanced things so beautifully that I never ever felt that I didn’t have her around whenever I needed her. Thanks to her, I have always looked up to other working mothers and wanted to step into her shoes. Let me tell you, it’s not easy. So, three cheers to all working women!” Well, most of us do take after our mothers, which is why it is so important to be a good example ourselves. We don’t want to handing down internalised misogyny to our daughters and penis pride to our sons.

Amrita Rao is having a great time with her son, Veer and keep blasting her Instagram feed with his adorable pictures and videos! On the work front, Amrita said she had received several offers from OTT platforms last year. She said she had also received a call from Boney Kapoor for a project. However, due to her pregnancy (which was kept private!) she didn’t take up any offers back then.

ALSO READ: Actress Bhagyashree’s Son Shares How His Mother Is Still Remembered As ‘Suman’ From The Movie Maine Pyar Kiya

“Even now, offers are coming in and things are happening; I have read some scripts and ticked those that seem interesting. Things will happen very soon. This pandemic shook all of us again but I am hoping that by July-August we can start something”,” Amrita Rao concluded.

Recently, her ‘Jal lijiye’ dialogue from Vivah got viral as it inspired several memes. And Amrita Rao too, added a funny twist to it. She’s got a sense of humour!

ALSO READ: Amrita Puri Says She Got A Lot Of Praise But Not Work After ‘Aisha’. Are We Still Typecasting?