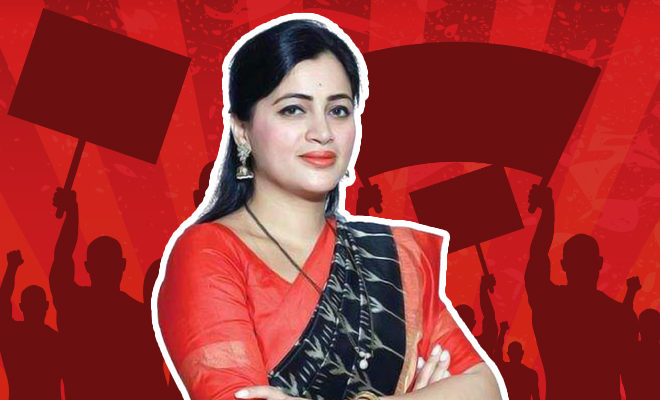 From being told the correct way to pronounce my own name, to being given advice about which brand of tampons to use for better results, to even being told what my “correct” bra size could be, I have experienced mansplaining in all kinds of ways, obviously by men where they believed they knew me better than I know myself. And striking a similar nerve was Shiv Sena MP Arvind Sawant, who was recently called out by Amaravati’s MP Navneet Rana for suggesting that her body language wasn’t correct while she was talking to Uddhav Thackeray.

This was after Navneet Rana wrote a letter to Lok Sabha Speaker Om Birla against Shiv Sena MP Arvind Sawant, after he allegedly threatened Navneet for raising her voice and concerns over the Sachin Waze case in the Lower House.

Questioning Sawant on the basis on which he sought to send her behind bars, Navneet Rana said, “I have already raised the issue with Speaker and Parliamentary Affairs Minister Pralhad Joshi. If I get time on the floor of the house, I will ask Arvind Sawant on what basis he will send me to jail.”

Also Read : Nicole Tersigni, A Comedy Writer, Finds The Perfect Way To Depict How Women Are Mansplained By Men With Help Of Classical Art. Now That’s How You Do It!

‘Arvind Sawant is threatening an acid attack on me,’ Amaravati MP drops a bombshell against Uddhav govt#NavneetRana alleged that she was threatened by #ShivSena ’s #ArvindSawant for speaking against the #UddhavThackeray-led #Maharashtra government.https://t.co/2u0FRCYvza

She probed, “Will I will be sent to jail on the grounds that I have spoken against Uddhav Thackeray? I was threatened several times over the phone by many people. They even threatened acid attacks. But this is an elected MP talking. If Shiv Sena can treat an elected MP in such a manner, then one can imagine how they would be treating a common woman.” And considering how Shiv Sena is infamous for how poorly it upholds women’s right, or women in general, we relate hard with Rana’s words.

Not backing down over the comments that were made by Arvind Sawant, Navneet Rana went on to say how she will file a police complaint. Reiterating the kind of language used by Sawant in her letter, ‘Tu Maharashtra mein kaise ghoomti hai main dekhta hun aur tere ko bhi jail mein daalenge (How will you move about in Maharashtra now, I will see how you can do so and you will be also put in jail),’ Rana said, “The kind of language used against me by Arvind Sawant is an insult to me and also the women of the entire country. I want strict police action against him.”

While the Shiv Sena MP has denied any claims of truth to Navneet’s statement, saying he never threatened her, we are yet to find out the truth. Until then, how about you stop mansplaining our conduct and take a good look at your own, Mr. Sawant?

Also Read : Navya Nanda Talks About Facing Mansplaining And Being Constantly Undermined In A Male-Dominated Industry.