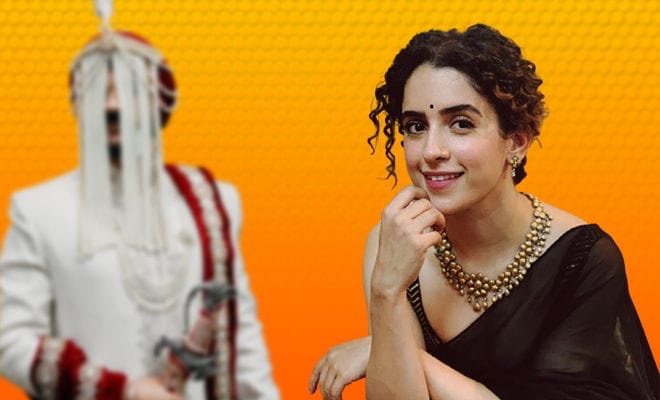 As soon as I turned 24, my parents started talking and joking about marriage. It’s almost as if they are, in their own twisted and annoying way, trying to mentally prepare me to settle down soon. Most girls my age go through this. While I want to get married someday, I have certain criteria and I am unwilling to compromise on those. Sima Aunty would not like me at all. But that’s enough about me. Today, we are talking about Dangal actress Sanya Malhotra and her idea of marriage.

Sanya Malhotra just saw her movie, Pagglait, that released earlier this year. In the movie, she plays the role of a young widow who breaks multiple stereotypes and refuses to conform to societal norms. In a recent interview, Sanya opened up about how she is now single and ready to get married. She also shared the qualities she wants in her SO and asked the readers to get in touch with if they thought they were “the one”. Of course, the latter half was meant as a joke.

Sanya said in the interview, “This is such a personal question, Honestly, I don’t know… I am single and I am ready. I keep asking my friends, what I should do and they keep telling me that, ‘you have to put yourself out’ and I just don’t get it. What am I supposed to do with it? I do not have any set rules on how I want my partner to be; koi bhi mil jaye, chalega (I am okay with anyone). Jokes apart, he should be a nice person, mentally, and spiritually awakened, and I would really appreciate it if we have a similar mentality. To the readers out there, if you’re the one, call me.”

Also Read: Kangana Ranaut Revealed Her Parents A Raging Affair Before Their Marriage, Something That Was Hid From Her

I love how relatable she is. Haven’t we all wondered if we were ready? Asked our friends and gotten the same answer? Have similar criteria as her? At least she has a sense of humour about it all.

Further, Sanya Malhotra was asked which Bollywood actress she admired the most. Her answer was no surprise. She said that she would really love to work with Tabu given the chance. Sanya said, “I hope that I would get a chance to work with her. And if I get the chance, I would be unconscious for the first two days. When it comes to male actors… it’s Rajkummar Rao.”

Kudos to her for being so candid! Want to watch more of her? Catch her on our channel here: