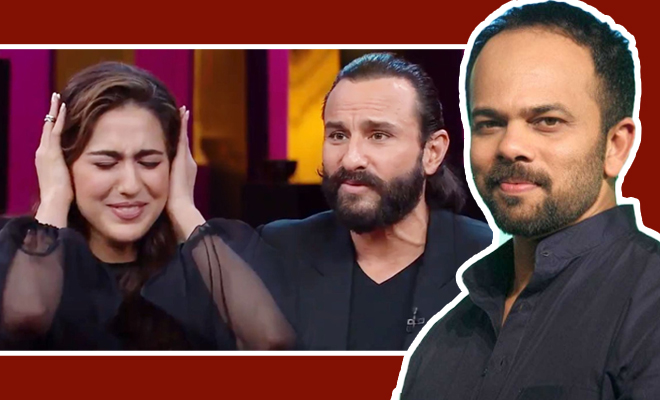 A Video Of Rohit Shetty Defending Sara Ali Khan Against The Nepotism Debate Has Gone Viral. Apparently, Sara Begged For The Role. Most People Don’t Even Get That Chance

As sad as it may sound, our response to what has happened in the recent past has been tragic example of what our humanity is like. Whether what we’ve had to say when horrible cases like the Nirbhaya Rape case happen or the stuff we have to say when we  witness the suicide case of a young and successful actor, Sushant Singh Rajput, it’s pretty obvious that we as a country lack sensitivity.

And so, when the news of actor Sushant Singh Rajput passing away hit the headlines, besides the brief conversation about mental health, it also sparked, or re-ignited, the conversation about the inherent nepotism in the industry. A lot of actors shared their experiences of losing work to star kids and many like Karan Johar (called the flag bearer of nepotism in the industry), Alia Bhatt, Sonam Kapoor and the likes of them were called out.

But one star child who was awfully quiet and chose to not be a part of this debate was the Simmba actress, Sara Ali Khan. And many came to her defense, saying she is one of the very few actresses who is where she is because of her talent. Corroborating the statements with an old video of film director, Rohit Shetty where he shared how Sara Ali Khan had to beg him for the role she played in Simmba.

This is totally BS (bullsh**) , she knew rohit shetty cause of her parents so how does dis not qualify to that certfication of #nepotism tag??? , i can see ur her fan but i am really sorry from all of us real people we wont allow nepotism to exist anymore , sushant rip🌸

Atleast she signed the film sooner than the ppl who stood hours n hours in the line. NO DEBATE but atleast she got to beg Rohit Shetty directly! 😹 there’s privilege ofcourse. She might be a kind person! But plz don’t try to JUSTIFY #NEPOTISM. ❤️👍🏻 #SaraAliKhan

Umm so you mean to say if someone from outside went to rohits office and begged for a role she would get the role. It’s about creating same opportunities for everyone and taking auditions and giving equal chance to everone based on their talent not on parents

The video shows Rohit talking about how neither Saif nor Amrita made a call to the director to consider their daughter Sara Ali Khan for a role. And while that may be how it was, it still stands to reason that the easily accessibility to the entire fraternity and such a big director was because her parents are Amrita Singh and Saif Ali Khan. Considering how hundreds and thousands of people come to Mumbai every year to try their luck at becoming actors and most don’t even get a legit audition, for her to get on a call, whether to beg or bargain, was but the very sign of nepotism they’re defending.

And seems like the netizens agreed, as they were quick to roast the two for the same. Questioning whether any outsider would’ve been taken so seriously in place of Sara Ali Khan, they dropped comments like, “Atleast she signed the film sooner than the ppl who stood hours n hours in the line. NO DEBATE but atleast she got to beg Rohit Shetty directly! there’s privilege of course. She might be a kind person! But plz don’t try to JUSTIFY.”

Not only Saif Ali Khan but also Taimur has been a victim of Nepotism 😅#SaifAliKhan #TaimurAliKhan pic.twitter.com/gl4uy5PyGV

You were flop for so many years, despite that you keep getting opportunities unless you did Dil Chahta Hai , All your films were sheer crap you keep getting work because you belong to the fraternity.#SaifAliKhan pic.twitter.com/nAmdiPhNWW

Now we don’t know how, but it turns out both the father and the daughter are out to gain sympathy votes in this debate because  Saif Ali Khan recently said he’s been a victim of nepotism too. Yes, we will wait while you pick your jaw off the floor. He said in an interview with the New Indian Express, “Nepotism in its purest form is something that even I have been a victim of. But nobody’s interested in that. Businesses work like that. I am not going to take names but somebody’s dad has rung up and said don’t take him, take him in the movie. All that happens and it has happened to me. There is inequality in India that needs to be explored. Nepotism, favouritism and camps are different subjects.”

Okay, so who is going to tell him? Them?

Also Read : Sushmita Sen Talks About How She Survived Nepotism In The Industry, And We Love Her Optimism