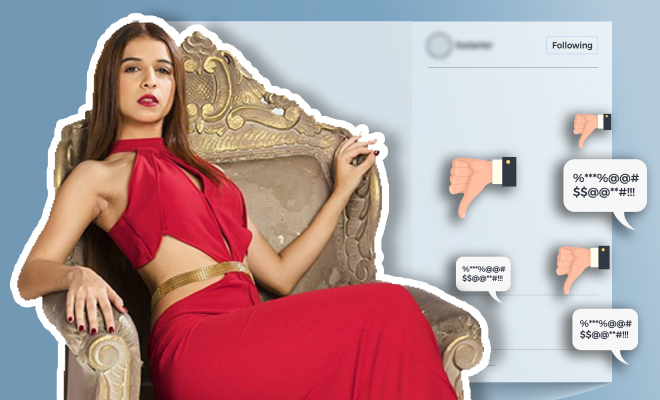 We have both good and horrible people in our world, and in many ways, the internet has become like an extension of our world – just less real and more exaggerated. Internet too has people who are putting their digital selves out there, so they can be either positive or negative. But here’s the thing, in real life, people are afraid to show the mean, terrible, disgusting side of their personalities because they know they will be judged and ostracised. Some shady things people do online may even get them arrested in the offline world. So with the shield of anonymity and lack of stern consequences, people spew venom at others, especially celebs and treat them apathetically – as if they are not humans at all.

Recently, Bigg Boss 11 fame Benafsha Soonawalla had to bear the brunt of this brutality when an Instagram user suggested her to commit suicide. A user wrote, “Tu suicide kyun nahi kar leti @benafshasoonawalla.” She replied to her saying, “Sending this to cyber crime right away.” Benafsha put up stories in which she called this person out for such insensitivity. She wrote, “Have some shame. After everything? Where is humanity? Where?” She then tagged cybercrime department and said that she is doing this so more people don’t fall prey to the suicide suggestions by this “dimwit”.

ALSO READ: A 14-Year-Old Kenyan Girl Committed Suicide After Being ‘Period Shamed’. Why Is This Even A Thing?

This is really sick. In the light of recent tragic events, we should be paying more attention to mental health and not just of our own. If you can’t help someone feel better, the least you can do is not go around adding dents to someone’s vulnerability. Imagine, if this shameless troll went and told someone to commit suicide and that person was actually depressed. Imagine if someone actually contemplates taking that step. Even if they don’t, it’s really not cool to attack someone and douse them in your negativity.

ALSO READ: Can We Please Talk About The Obscene Comments On Live Sessions? It’s Disgusting And Women Shouldn’t Be Harassed Like This