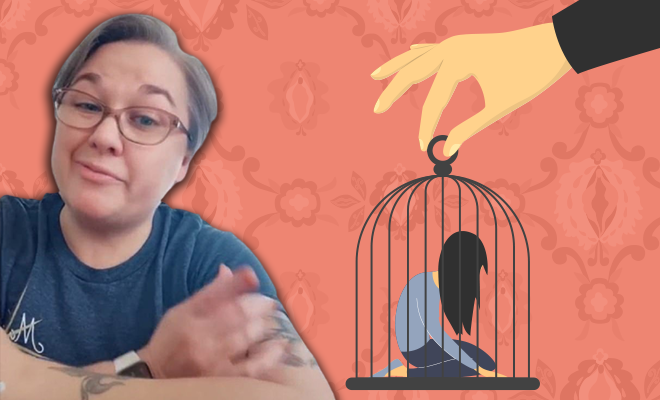 Do you know how ironical it is that in a country like India where most people believe bearing children is a woman’s sole purpose on earth, the concept of sex has so much stigma surrounding it? It’s part of why our country is on the brink of a population explosion. Growing up, we weren’t allowed to even utter the word ‘sex’ and asking any questions about it was like poking the bear (get it, get it?). What makes it all worse is the fact women are constantly shamed for the smallest things like wearing a skirt or showing a bra strap. We are deemed promiscuous and constantly fed bullshit like that our virginity equals our worth. It’s time we move on from all these rubbish stigmas and teach girls that safe sex between two consenting adults is not a big deal. Maybe we should adopt the ideology of this USA woman who has taught her five daughters that virginity is a social construct that our patriarchal society uses to control women. We completely agree!

Cayce LaCorte, a mother to five daughters from South Carolina, believes that virginity is just a myth propagated by the patriarchal society as a way to control women. In a TikTok video that went viral, she says that she is teaching her daughters that even though sex is important, it’s not as big a deal as everyone makes it out to be. Cayce wants her daughters to not feel any extra pressure or judgement the first time they have sex. Dear parents, please take notes.

In the video that is doing the rounds of social media, she said, “I’m raising my five daughters to believe that there is no such thing as ‘virginity’. It is a patriarchal concept used to control women and serves no purpose. Other than making women feel bad about ourselves.”

Also Read: Netherlands Is Advising Its Citizens To Have Sex And Cuddle Buddies. Meanwhile, We Are Regrowing Our Virginity In This Lockdown.

We completely agree with her. Sex has been viewed as a taboo topic for too long and over generations, which has done more than enough damage. Instead of telling our young girls that their virginity is somehow directly propionate to their worth and character, we should be teaching them having sex doesn’t change who you are. That’s exactly what Cayce is trying to teach her five daughters.

Cayce said in her video, “Just because some guy randomly sticks his penis in you at some point in your life does not change your worth, it does not change who you are, it doesn’t do anything other than it happened. Sex is important. It’s a big deal. It should always be a big deal. It has nothing to do with your ‘first time’. It’s just ridiculous. The whole concept is ridiculous.”

Talking about how other mothers judge and shame her for spreading her ‘virginity is a myth’ message, Cayce said, “I get a lot of crap from other moms saying, ‘Oh well, do you think that will make your daughters promiscuous? Don’t you think?’ And I am like no, I am raising them to be good people and have solid foundations and make their own choices and make smart, intelligent choices. Not because some book says not to.”

Can we normalize sex education and parents teaching their children that self-worth and sex aren’t even remotely related? More parents need to understand Cayce’s message and apply it while parenting their children. It’s important for us to now step away from these archaic patriarchal notions.