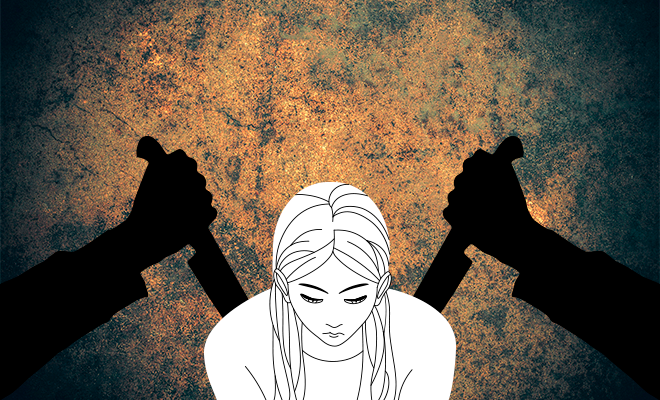 A 19-Year-Old Woman In Punjab Was Raped At Knifepoint When She Went To Use A Public Washroom. Where Are We Safe?

What do you say when the fact that you didn’t get raped is just a matter of your luck and the rapists’ lack of opportunity? Because with the number of rape cases we hear of, every single day, I feel there’s a potential rapist in every nook and corner of our country. A three-year-old girl was sleeping next to her mother on a train platform when she was abducted, gang-raped and beheaded. A 26-year-old veterinarian doctor in Hyderabad was gang-raped and burnt when she was returning home from work. A five-month old baby was raped by her mother’s cousin at a wedding. Where are we safe? Is there any corner where there are no shadows lurking in the dark, waiting to catch us in isolation?

Recently, a 19-year-old woman from Punjab was raped at knifepoint, near a toll plaza on a national highway in Karnal district, Haryana. The woman was returning from Panipat with her husband and had deboarded the bus near the toll plaza to meet a relative. All she did was head to the washroom near the toll plaza and she was intercepted by two men, who eventually raped her. Her husband meanwhile was having tea at a roadside stall.

The prime accused is a roadside vendor and had an accomplice from Panipat. They abducted her and raped her near Kutail underpass, close to the toll plaza they were at.

The rape survivor was able to reach her husband and they filed an FIR for the crime, post which both the perpetrators have been arrested. Inshorts reported that they even left their phone numbers with the woman, which helped the police nab them. This hasn’t been verified by any other news report though.

ALSO READ: Cyanide Mohan Raped And Killed 20 Women. But No One Cared To Trace The Victim’s Families Or Identities. Our System Failed These Women

There will be several people who will blame the woman for going to a public washroom without her husband escorting her. Several people will say, she should have tried to call them ‘bhaiya’. And it’s a shame that a woman, who has been violated continues to be further desecrated by our society. Now women can’t even safely use the washroom. Our society is full of monsters and those who are not raping a woman, are still disrespecting them in varied ways. Don’t know where we are heading with this.

ALSO READ: In Bengaluru, This Woman Was Sexually Assaulted In A Bus By The Conductor. Her Presence Of Mind Got Him Arrested. She’s So Brave