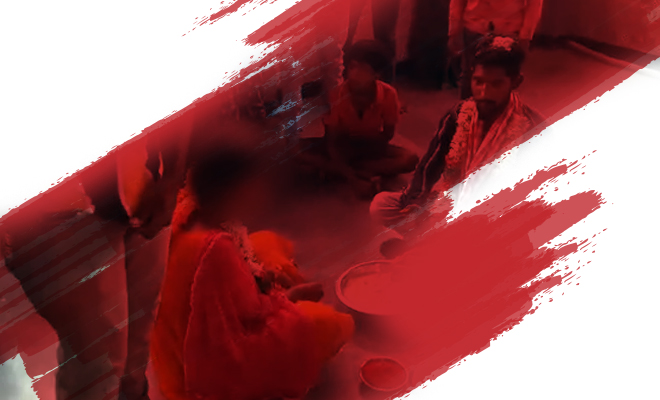 A 16-Year-Old Girl Was Forced Into Child Marriage In Telangana During The Lockdown. When Will This End?

Yesterday I received what will be known as my first rishta for marriage, ever. My mother walked into my room, with a smug smile on her face and sat across me on the edge of the bed to share how a friend of my father’s is interested in asking my hand for marriage for his own son. A typical arrange marriage proposal I thought, soon followed by a quick laugh with my mother for we both knew it wasn’t to be taken seriously. Why? Because even at 24, my parents were aware that I am still too young to be married off. A fact not many households agree upon, because why should consent, emotional maturity and all that have any role to play in a relationship that’s only going to last a lifetime? Like the life of this 16-year-old girl in Telangana who was married off to a 23-year-old man.

This incident sparked a bunch of child rights activists to go after everyone who made it happen, including the priest, the groom’s and the bride’s parents. The wedding was apparently conducted by a priest at Matha Temple in Medchal district’s Kandlakoya near Gundlapochampally.

As reported by the activists, even though the FIR reads the girl to be of 16 years, it seems like she is but a pre-teen who studies in class 6th but hit puberty about a month ago. She was being married to Raju, a construction site worker at a ceremony that was attended by 30 people, most of them not wearing masks even during the time of social distancing.

Also Read : Zero Child Marriages Have Been Reported In Rajasthan Due To The Strict Lockdown. Guess There Is A Silver Lining!

Achyutha Rao, another child rights activist in the case said, “Cases should be filed under relevant sections of the POCSO (Protection of Children from Sexual Offences) Act and Section 376 of the Indian Penal Code for rape as the marriage was reportedly consummated,” and so they have as per the reports.

Despite stricter laws in place, child marriage still remains to be one of the biggest concerns in India, for on the daily there are hundreds of girls who are married to elder men at an age where they should just be studying. It is time women and girls are offered the same liberties and free will as men, and at the least allowed to complete their education. Yes, with the lockdown in place there has been a fall in the number of child marriages, yet we think there is a long way for us to go!

Also Read : A Minor Girl Was Secretly Forced Into Child Marriage In Haryana During The Lockdown. She Got Rescued But So Many Crimes Against Women Go Unreported.