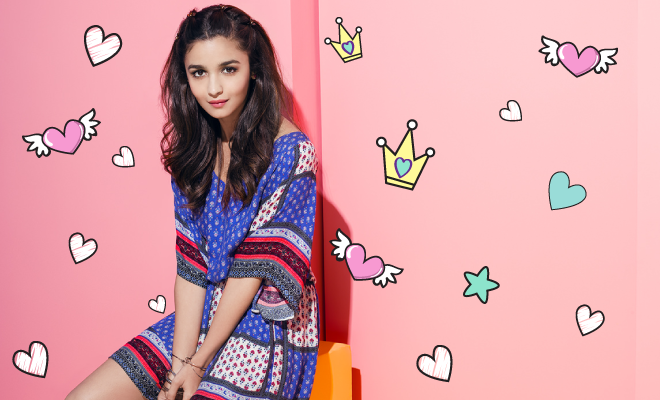 Bollywood can be a crazy place. We see new faces comes in and go every day, some people using the revolving door to never really come back. And nepotism or not, some star kids simply don’t make it. But one actress who has time and again proved her mettle with her acting prowess is Alia Bhatt. She may have come in like storm, delivering a hit, one that people pegged as a one off but she’s stuck around and she’s made sure the world knows she is here to stay.

This woman practically speaks to our soul.  So today, as she turns 26, we recall all the times she’s proven to be the perfect role model for all of us!

Alia entered the industry as a star child with her debut in Student Of The Year and soon was made a joke out of after her Koffee with Karan debacle where her general knowledge was found to be lacking. Instead of dismissing it, the actress took  that in her stride, and went on to collaborate with AIB to release a hilarious video, embracing the whimsy side of her.

The time she showed us how to handle criticism like a pro!

If you’ve been in the loop of what is happening in the B-town, you’d be in the know of Kangana’s outrageous and baseless digs at Alia here. And while she had all the reason to give it back to the Manikarnika actress, Alia bhatt took the high road and chose to respond to all the criticism in a calm and dignified manner . One that we could all learn from.

All the times she’s taken on awe-inspiring roles

Alia Bhatt did not just get to the top of her game for repeating her roles. This woman refuses to be boxed in and for every cherubic cute character she’s played, she’s gone on to go a gritty girl that’s just as good. From Highway to Udta Punjab, all her characters have struck a chord with us and we love her for that!

From attending every single celebration and function, to dancing at the sangeet for her best friend’s wedding, Alia has aced the art of keeping her stardom at bay. She’s the fabulous best friend we all need to be part of all the big and small moments.

Alia Bhatt over a span of her 8 years in Bollywood has often been linked with quite a few hotties, but she has always chosen to be tight-lipped about her personal life. She believes “It is just a part – and a very important part – of my life. It’s seamless as well as beautiful, and should be celebrated when it has to be. Right now, it should just be left on its own and kind of kept in a corner where it can stay safe and warm.” If that is not maturity, we don’t know what is.