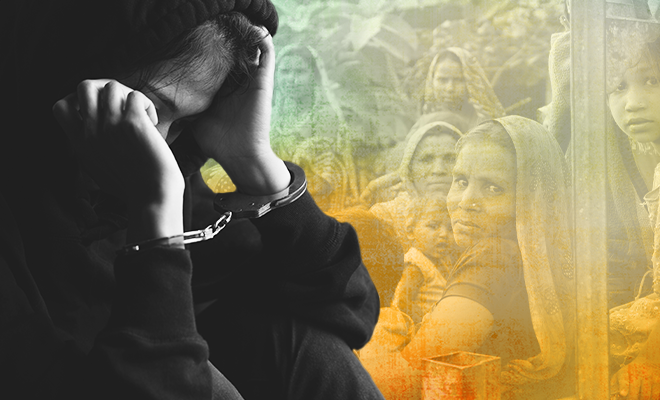 Almost 29 Million Women And Girls Are Victims Of ‘Modern Slavery’, Says UN Report. Why Are We Not Surprised?

Not to sound cold hearted or indifferent, but there comes a point where after reporting brutal cases of harassment, rape, dowry deaths and murders on the daily for years on stretch, that you finally find yourself hit a point where you aren’t shocked at the sound of anything, anymore. You finally realise that the society has succeeded in numbing you towards any threat to life, by constantly failing you and all the women around you. Be it the Nirbhaya case, the Hathras rape case, the rising number of domestic violence or dowry death cases, there is nothing that is unbelievable or unimaginable anymore. Not even the statistics from the latest report by the United Nations, called “Stacked odds” that has revealed 29 million women and young girls around the world to be victims of ‘modern slavery’.

Being touted as yet another ‘eye opener’ for the world to see and realise how horrible it is a place for us women, the report by the United Nations reveal that millions of women and young girls find themselves victims of practises such as debt-bondage and domestic servitude. And no, it’s not different from how it sounds, it is modern slavery.

Considering how almost every state, every country is juggling in at least 5-7 digit numbers of crimes against women, it is disheartening to see that almost one in every 130 women and girls is subjected to either forced labor, forced marriage, debt-bondage and domestic servitude on a daily basis. Clearly, women in this world have been reduced from the status of human beings to mere objects, and traded like them too.

As per a report by the United Nations, one in every 130 females globally is living in modern slavery, including practices such as debt-bondage, forced marriage, and domestic servitude.

Grace Forrest, the co-founder of the Walk Free anti-slavery organization quoted in a UN press conference, “The reality is that there are more people living in slavery today than any other time in human history.” And considering the statistics weren’t as bad when slavery was not a crime but a way of life, it is shocking to see the devolution of humanity in the past few decades. You would think that modern slavery wasn’t a thing but we’re in 2020 and it still exists.

Trying to bring that number down, Walk Free and the U.N.’s Every Woman Every Child program are launching a global campaign, with one of their main motives to criminalise child and forced marriages, which are till now decriminalised in only 136 countries, despite their unfair nature. Along with this, Forest also shared her vision to urge people to move away from products made by forced labour. She said, “We know that women and girls are experiencing unprecedented levels of exploitation and forced labor in supply chains of the goods we buy and use every day – clothing, coffee, technology.”

We might have a long way to go before these alarming number of crimes and violations against the female sex are under control, but with these efforts in place, we may just have a winning chance in the longer run.

Also Read : Another Campaign Launched For Women’s Safety In Bengal. The Crimes Against Women In The State Are Alarming