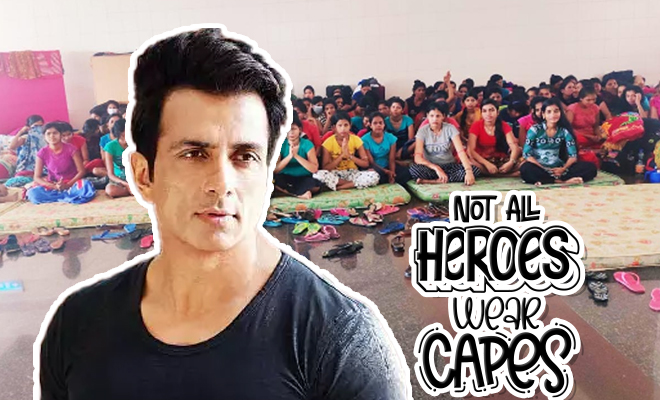 151 Women Labourers Get Home In A Chartered Flight, All Thanks To Sonu Sood. He’s The Real Hero

When a tragedy such as the COVID-19 pandemic happens, we look at those we admire for hope and inspiration. For a large majority around the world, these people are celebrities – often actors and musicians with huge fan followings. We can tell from the example they set for us whether we should be looking up to them as role models, or merely as people who choose to remain comfortable in their privilege. Some celebrities have proved to be of the former category by actively spreading awareness and contributing with financial help and other resources to help our country deal with what is perhaps the biggest lesson of our times.

Sonu Sood has been at the forefront of the movement to send migrant workers back to their homes. Through his Ghar Bhejo initiative, he has helped around 12,000 migrant workers reach home safely. Food and water has been provided to them as well.

Now, he has helped 151 women labourers from Odisha return home on a chartered flight. The workers were left stranded at a textile factory in Ernakulam district, Kerala. No trains were available, and the women did not have money as they had resigned from their jobs at the factory. They were desperate to get home. The flight arranged by Sonu Sood took off from Cochin International Airport on Friday morning at 8 am. This may be the first instance of migrant workers being sent home in a chartered flight in our country. The 151 women from KITEX Garments were also joined by 9 migrant workers from Bawa Wood Factory, who are from Odisha.

With the assistance of the Kochi city police commissioner Vijay Sakhare, the female labourers were transported from labour camps to the airport on Thursday night. The Odisha government has given them the necessary permission to return to their home state.

Sonu Sood’s efforts for the migrant workers has been more than any other single individual in our country at this time. He has been dedicatedly working towards this cause and has helped thousands. This is the kind of example that inspires us to do whatever is in our power. If not anything else, it at least makes us aware of our privilege and how we can use that to help those who do not have it.

Ekta Kapoor Steps Up To Provide Financial Aid To The Paparazzi. This Is So Sweet