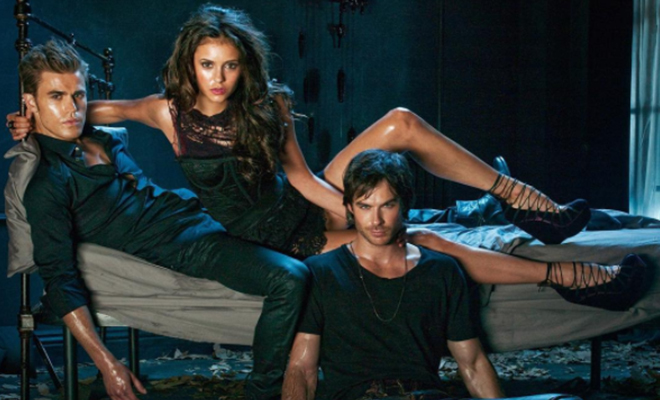 10 Things We REALLY Miss About The Vampire Diaries

When it comes to teen romances, nothing tickles our fancy more than vampires and werewolves, for some odd reason. I mean, the obsession started with Twilight, then evolved to The Vampire Diaries, only for its spin-off, The Originals, to take the reigns and keep that supernatural fantasy going on TV.

An adaptation of the novels of the same name, The Vampire Diaries ran for 8 seasons straight, and ended about 2 months ago. Now, the thing that all TVD fans know is that with this show, things never really get over…people don’t really remain dead with the after-after-life and all — so we can only hope that the writers will cast a spell and revive it once again.

After following this plot-twisting, suspense-inducing show, here are 11 things we STILL miss about The Vampire Diaries (PS: Stefan & Damon Salvatore we want you back!).

The beginning of this whirlwind, the Salvatore brothers didn’t quite get along in the start of the series — however, through their journey, we find that they their separation was thanks to one special lady. Up until the end, these 2 have a rollercoaster of a relationship, but you can see their true bromance in the way the willingly sacrificed their needs for each other #BroGoals.

It all began with Stefan and Elena’s undying love for each other. Barring the fact that she looked a whole lot like Katherine Pierce, Stefan truly loved this girl with all his heart. And she did too, until her connection with Damon clicked and boy, did their chemistry kick some ass.

Once again stuck between 2 brothers, Elena chose Damon, and Stefan sacrificed his love for his brother. Oh well, at least we know that he eventually fell for Caroline and we’d like to think that they lived happily every after (Ssssh we know how it ends, but one can only dream).

How can we not talk about Katherine Pierce? The reason why the brother feud began in the first place (or the vampire chronicles), this character was one we had a love-hate relationship with. Elena’s doppelganger’s wit and evil brought an element of excitement and fun on the show.

Although she doesn’t appear all that much through the series, the evil spawn really kicked ass for the little time that she was there! And with several attempts of murdering her (and being successful at it too), this bitchy bae was a tough one to get rid of.

4. The Villains That Came With Each Season

From Katherine to Klaus, Kai to Silas, each season was packed with its assigned villain and a whole lot of varied trouble that came along. A few, you eventually learnt to love (Klaus <3), and a few, you found too annoying to even handle (Klaus’ father, Mikael) — however, with each season end, you knew that evil wasn’t really defeated.

Keeping you wanting more, TVD really knew how to get you hooked onto the devil.

Like seriously? Sucking blood, ripping heads, staking hearts, burning houses, aaahhh the bloodshed suddenly became a normal thing in Mystic Falls. Every human knew that the supernatural were lurking in their backyards, but hey! They’re still friends and family okay,?

We grew accustomed to seeing Tyler’s bones break or Caroline going on her killing spree, or even Elena turning off her humanity switch, and weirdly, that’s what kept us coming back for ‘just one more episode’.

The perks that come along with selling your soul to eternal hell — the vampires had the ability to compel humans to do things for them, it gave them power to control over their minds, they could erase bad memories, and how can we forget…the infamous ‘humanity switch’.

Wish it was that easy to turn off! But hey, we do miss all the vampires using a flood of emotions as an excuse to turn cold-hearted (even if it didn’t quite warrant it — yes, Stefan and Damon, we’re thinking about you).

The element of flashbacks in the show connects the centuries together, and it was really nice to see the same characters go back in time — in a different era, with different clothing (ah, the costumes) and a different approach to the vampire life.

It was a pleasant site to see Damon in a tail coat and top hat (although we did like him better with nothing on) or Katherine Pierce in her full Victorian element.

The beginning of trouble’s end — you know when Bonnie Bennett spread her hands and chanted anything that began with the words “Phasmatos”, she meant business. And if she got a nose bleed while doing so, the matter was damn, serious.

Which other show would have such bitchy witch eh?

The infamous flower to keep the bad vamps away, the flower vervain was a major part of the show. Known to burn the skin of vampires, and also prevent them from mind control, who knew a little flower could have so much power eh?!

Although the show revolved around 2 brothers, it was also a lot about the power of sisterhood. The girls, Elena, Bonnie, and Caroline proved to be waaaay stronger than all the men put together, and stuck by each other no matter what the situation.

Goes to show that nothing can EVER break the bond between sistaaahs!

Ending the article with this, the killer combination of Damon’s one-sided smile and wink would make our hearts skip a beat and our panties drop to the floor. Ian Somerhalder’s beaming eyes were enough to forgive all the sins Damon Salvatore had committed.

With that being said, we STILL miss seeing these peeps stirring up trouble whatever chance they get. Here’s to hoping that like a lot of the characters on the show, The Vampire Diaries also resurrects from the dead (only because we really didn’t like that ‘they all eventually die anyway’ ending).