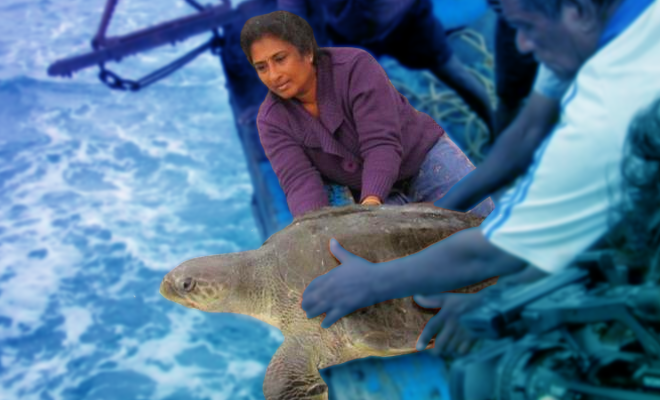 From politics to business, human rights to education, women have been making their mark in every field, across the globe and for the first time in history, finally getting recognised for it. Whether it is emerging as a successful businesswoman or a champion sportsperson, women are revolutionizing the world and one such woman is Dr. Supraja Dharini, Founder and Chairperson of TREE Foundation whose chance encounter with sea turtles has turned their entire life around.

Sea turtles or specifically the Olive Ridley sea turtle are the second most smallest turtles in the world. It is said, that they have a tendency to return to the same land that they were born on to further lay their own eggs. Marvellous little creatures and an important part of the marine ecosystem, Dr. Supraja Dharini spotted the first sea turtle of her life back in 2001 on one of her morning walks on Chennai’s Neelankarai beach.

She shared, “I stayed back, not wanting to scare it. But it was only a little while later that I noticed it was actually dead.” When she moved forward for a closer look, she observed it was ridden with several injuries. She went on to share, “I then walked to the nearby fishing village and spoke to the fishermen about it, but for them it was not news. Idhellam sarva sadharanam, they said (this is a common occurrence) and I was deeply affected, hearing it.”

Also Read : Meet Swati Rathore, The First Woman IAF Lieutenant To Lead The Flypast At The Republic Day Parade. It’s A Moment That Will Make History

While she could have paid heed to the fishermen and moved on, what did actually stay in her mind were the words of a renowned conservationist and wildlife activist, Dr. Jane Goodall. She said, “I had watched a documentary of hers and in it, she said ‘each and every individual can make a difference’. I believed I could too.” And boy did she make a difference.

Today, her effort of making a difference as an individual has grown to become an entire movement as she is leading the TREE Foundation a trust for environmental education, conservation and community development to help protect the lives of such Olive ridley turtles.

She was also recently honored by the well-known American-based Explorers Club as one among its “50 People Changing the World”. She says, “Receiving this prestigious award puts our country firmly on the conservation map and  shows the world that we are making an effort to protect our marine heritage and wildlife. Being the first woman from south India is truly an honour.”

Having started small, the TREE Foundation is as big as having 363 members from 222 fishing village communities located along India’s eastern coastline. She went on to share the role of women in shaping this and recalled how, “During my early days, women would call me names because I spent too much time with the youths. Women would also not come for patrols. But I never let that deter me. I carried on with my work.” And following suit are more people with a similar and nurturing interest of saving the wildlife.

Also Read : Meet Dr. Kriti Bharti, The Woman Who Has Saved Almost 1400 Child Brides From Marriage. She Is A Legend!