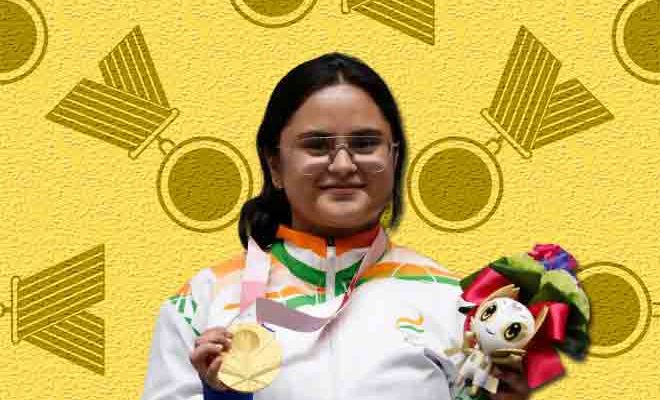 With this latest win, the 19-year-old Paralympian has become the first Indian woman in history to win two medals at the Paralympics. She secured the third position in the 50m rifles SH1 event and claimed the bronze medal for the country.

Avani Lekhara had won her gold paralympic medal in the 10m air rifle standing SH1 event. That also marked the first-ever shooting medal for India in the Games. The Indian Paralympian’s score at the Tokyo Paralympics 2021 had equaled the world record total score of 249.6 – that also became a new Paralympic record. And now Avani Lekhara won a bronze medal in the 50m rifle SH1 event.

According to the Times of India, Avani Lekhara in the 50m rifles SH1 paralympic event scored a total of 445.9. She finished ahead of Iryna Shchetnik of Ukraine, who shot a poor score of 9.9 in the eliminations.

More glory at the Tokyo #Paralympics. Elated by the stupendous performance of @AvaniLekhara. Congratulations to her on bringing home the Bronze medal. Wishing her the very best for her future endeavours. #Praise4Para

When asked about her performance at the 50m rifle SH1 event in the Tokyo Paralympics 2021, Avani Lekhara said, “It was a tough final but I’m happy to have made it into bronze. I could have done better than this. It’s just what finals do to you.”

Avani Lekhara started her shooting journey after sustaining spinal cord injuries in a car accident. Now, she has made history, and is not stopping at this current honour. Avani is all set to compete in the upcoming mixed 50m rifle prone SH1 event. The 50m mixed rifles prone SH1 event at the Tokyo Paralympics will also feature other Indian Paralympians—Deepak and Siddhartha Babu.

History has been made !

It makes me so proud that Indian women are creating history and inspiring the youth of India. The Indian Paralympian, Avani Lekhara has created a legacy that is tough to forget and this is just the beginning for her. The 19-year-old Jaipur-based shooter still has a long way to go. And honestly, I can’t wait to see the heights she achieves in the future. I wish her all the best for the upcoming event at the Tokyo Paralympics 2021.

In Nepal, Women Ran A Race While Carrying Their Husbands To Promote Gender Equality