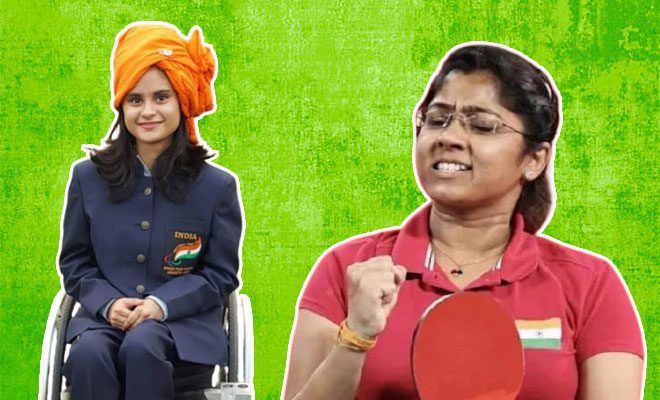 After India’s performance at the 2020 Tokyo Olympics, the encouragement and excitement for the Tokyo Paralympics has been palpable. Everyone throughout the country is excited to know what the games will bring for India. And our Indian Paralympians have really come through for us! So far, Indian Paralympians have bagged two gold, four silver, and one bronze medal in the Tokyo Paralympics. And two of those prestigious medals have been won by women! Avani Lekhara bagged a gold medal in the women’s R2 10m air rifle event. And Bhavina Patel won a silver medal in table tennis!

Avani Lekhara’s total at the women’s R2 10m air rifle standing SH1 event was 249.6 in the final and with this score, she equaled the world record. The 19-year-old Indian paralympic made history with her win, as she became the first Indian woman to ever bag a gold medal at the Paralympics, and a medal in a rifle event. When speaking about how she felt after winning the gold medal, she said, “I can’t describe this feeling, I’m feeling like I’m on top of the world. It’s unexplainable… I’m so happy I could be the one to contribute to it. Hopefully, there’ll be a lot more medals to come.”

The first #IND woman to win a #Paralympics #gold shares her thoughts on her spectacular feat. 🥇💭#Tokyo2020 #Paralympics #ShootingParaSport @AvaniLekharapic.twitter.com/KDWFVW0QUm

When Avani Lekhara was asked about how she prepared for the Tokyo Paralympics, she talked about how she took one shot at a time, finish it, and not think too much about her score and the medal tally. And look how focussing on her process worked out for wonderfully!

Just like Avina Lekhara, Bhavina Patel too gave a tough fight in her debut Paralympics to the world’s no. 1 player, Zhou Ying of China. Even though the Indian Paralympian wasn’t able to defeat the reigning champion, Bhavina Patel ensured a silver medal for India in the Tokyo Paralympics. She became the first Indian table tennis player to ever win a medal at the Paralympics.

Our Silver Smiles And here's the SILVER… Passing on the baton to a woman athlete on a wheelchair #BhavinaPatel !! Exceptionally proud moment! India wins its first medal at #Tokyo2020 #Paralympics , proudly presenting our #silvergirl pic.twitter.com/iAbNQIQyXJ

As you read this, the country is celebrating the fresh win, another gold, of javelin thrower Sumit Antil, who clinched India’s second gold medal, shattering the men’s F64 category world record multiple times in his Paralympics debut. Monday has been quite the golden day for India at the Tokyo Paralympics indeed! We’re so proud!

These Sportswomen Have Already Secured A Spot At The 2020 Tokyo Olympics. They’re Already Champions!