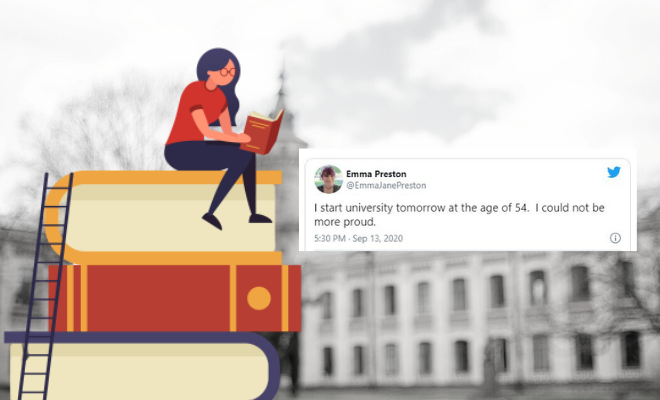 A Woman’s Tweet About Her Enrolling In University At The Age Of 54 Has Twitter Inspired. Let’s Normalise Living By Your Own Timeline

Ideally, you should be done with your high school sometime around you are eligible to vote, complete your graduation in your early 20s and start working before you turn 25 so you can be married off before 30. That’s how you are supposed to go about your life, isn’t it? Except 54-year-old Emma Preston wasn’t having any of that. She’s enrolled in a university right now!

Of course, she’s an exception. Because the thing is, life and goals don’t always pan out as we want them to. Things happen, or should I say don’t happen, and we fall back behind but that’s okay, because this timeline crap is only in our heads. There’s no right age to get married or get a degree and no age limit to get an education. We have so many real-life examples around who have taken the plunge much later in life.

So Emma Preston enrolled in a university at the age of 54. She took to twitter to post the happy news and wrote, “I start university tomorrow at the age of 54. I could not be more proud.” We could almost sense the excitement in her words. Twitter poured appreciation her way, while some shared their own stories of pursuing education at the later stage in life. And, honestly, this thread is proof that it’s never too late to learn and pursue your dreams.

Also Read: International Literacy Day: If Women Can’t Read Or Write, How Will They Be Financially Independent In The Digital Age?

I start university tomorrow at the age of 54. I could not be more proud.

The post has over 293k likes, 17k retweets and over 4k comments of people sending best wished her way and lauding her for her incredibly inspiring move. Some twitter users also shared how even they went to colleges or even got basic education at an unexpected age. A twitter user wrote, “Amazing!! Ill be just turning 43 when I graduate with my BSc Hons in Human Biology after having no education for most of my life. I was 15+ years in retail and had to change what I was doing with my life. If I can, anyone can! You’ll do amazing!! Enjoy!!” Another user wrote, “Go you!!  I started at age 64 and I’m now a senior. Should be graduating in Spring but cut back to part time to help out with grandson. College has been one of the best things I could have done for myself. Such a sense of accomplishment!”

There were thousands such comments which shows that getting an education in the later years was a life-changing decision for people and it only brought them the feeling of self-fulfilment and confidence. I hate to say this but in India, , it’s still a taboo. Something like this is never easily digested by the society and in fact, raises eyebrows. Why, even? However, we have seen people breaking the ceiling and not giving two hoots about what society thinks. Remember the grannies in Mumbai of 60 to 90 years of age who went to school to finally read and write back in 2017 or the 54 year-old HRD Minister of Jharkhand who resumed his class 11th after 25 years break? People like Emma Preston are incredibly inspiring.

So, you see, it isn’t a race to get to your milestones within the predetermined age but actually reaching self-actualisation no matter how old you are. Still we are hell bent on checking off these milestones as soon as possible only to ignore living and forgetting to find our passion in the process. That’s how engineers end up being artists later in life, just saying!

You're going to love it! I started my PhD at 39, finished at 45. Got a grad certificate at 55. One of my profs said he loved teaching us older students, as we already knew why we were there, and wanted to be there. (Of course, true for many younger Ss as well, but not all.)

If this thread taught me anything apart from the fact that people could really be encouraging on social media, is that we really need to accept and appreciate every individual’s own timeline. A 23-year-old with two degrees and a job could be equally successful and happy as a 40-year-old just starting off with college. Emma Preston is proof that age is just a number. All you need is to believe in yourself and toss out the absurd norms that hold you back on the basis of age.

Everyone should have the right to pursue their dreams even in their 50s or 60s or even 80s for that matter if they want to and no one has the right to judge. Someone’s success should not be contemplated on the basis of what they’ve achieved in a certain age. That’s plain ridiculous. Let’s move past this regressive mindset, shall we? After all, age is just a number.

Also Read: This 77-Year-Old Woman Wants To Study Law And She Has Moved The Supreme Court To Challenge The Age Rule