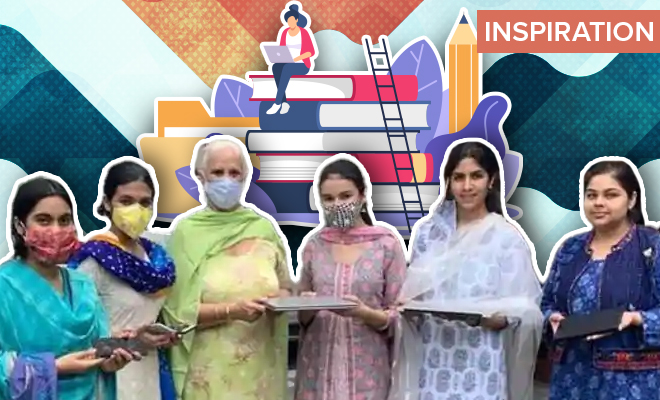 5 City Students Collect Gadgets For Rural Girls To Help Them Study Online During This Pandemic. We Need More People Like Them

This pandemic has not been easy on anyone. Businesses have dwindled, people are struggling to make ends meet and our health is at risk at all times. However, that’s not all. Covid introduced the ‘new normal’ where almost everything shifted to a virtual platform, including classrooms. This has forced students to sit in front of screens to take online classes on a daily basis. That’s not so bad unless you think about the children who cannot afford electronic gadgets or don’t have the access to them since they are from rural areas. In the past few months, we have heard a lot of stories about how students from humble backgrounds and rural areas have been struggling to study as they are in no position to pay for the smartphones and laptops.

In a bid to bridge this gap and help rural girls continue their education, 5 city students from a private school in Chandigarh have started a project named Prernaforyouand.us to collect gadgets including smartphones, tablets and laptops so their studies don’t suffer.  These gadgets will be provided to the first few girls studying in class 5 to 10 in a village who have no access to electronic gadgets to take online classes.

These students are Saachi Ahuja, Ustatt Anand, Samridhi Verma, Tara Khanna and Divjot Kaur studying in class 11 and 12 in Carmel Convent School, Chandigarh. They were inspired to take up the project by their former teacher Ms. Karnail Kaur. Kaur is now the principal of Green Field Public School in a remote village located near Chandigarh called Nadiali. Prernaforyouand.us has helped collect 12 different gadgets till now which will be sent to girls in rural areas to facilitate online learning.

5 city students studying in classes 11th and 12th from a #privateSchool have started this touching #project named “https://t.co/uIqU58hLBq” .
Aim: Collect and #donate electronic gadgets to aid in the online teaching of #rural girls amid of the conditions in the pandemic. #COVID19 pic.twitter.com/IJt6X5mu5n

A few weeks ago, the CM of Punjab announced that 50k smartphones will be distributed to school children who don’t have access to online classes due to lack of smart device. “The phones will be given first to girl students of government schools of classes XI and XII, with priority to those who do not have a phone so that their online learning can be facilitated amid the pandemic,” he said. This was a great initiative by the government of Punjab and now these girls from Chandigarh are following its steps to help girls study which is commendable.

In case you don’t know, there have been instances where parents have sold their possessions just to get their kids a smartphone to keep up with their studies. Recently, a survey was done by the National Council of Educational Research and Training (NCERT) which states that “Approximately 27 per cent of the students mentioned the non-availability of smartphones and laptops. The maximum number of stakeholders have opted for mobile phones as a medium for teaching-learning during the COVID-19 period,” said a report by Hindustan Times. This shows how challenging it is for underprivileged students to attend online classes in the times of Covid.

Most families in the rural areas don’t own a smartphone, let alone tablets and laptops. Even if there is, it is usually just one phone between two or three children which makes e-learning a difficult task for students. Kaur also points out that there is a bias against girls for owning electronic gadgets in the rural families and they are not given phones and laptops even if they can afford it due to some backward mindset, probably. Now with the Prernaforyouand.us these girls would get their own laptops and phones to study online without any hassles.

At least 27% students do not have access to smartphones, laptops for online classes: NCERT surveyhttps://t.co/1Gy4auJVIv pic.twitter.com/x9hlHiByJP

We think it’s such a great gesture by the students and Ms Kaur. Girls from rural areas anyway lack the opportunity to study as compared to boys and their city-dwelling peers. Moreover, the unavailability of gadgets could pose a serious threat to their education and a lot of girls could have been forced to leave studies at least for the time being, since their parents can’t afford smartphones. Prernaforyouand.us is helping these girls continue their studies and they are more than excited to get their own laptops and smartphone and start online classes.

Even after the pandemic, prernaforyouand.us is not going to stop helping girls. Not only in the field of academia, but they are also planning to spread awareness regarding menstrual hygiene and aims at educating girls about the use and importance of sanitary napkins. They have also expressed interest in talking to the village panchayat to encourage and educate girls and help out as many girls as possible. How great is this? We need more women like these who are going out of their way to help out girls and bring a positive wave of change in these tough times. Kudos to them!

Also Read: #Trending : CM Of Punjab To Distribute 50K Smartphones To Young Girls To Help Them Continue Their Education. What A Thoughtful Initiative