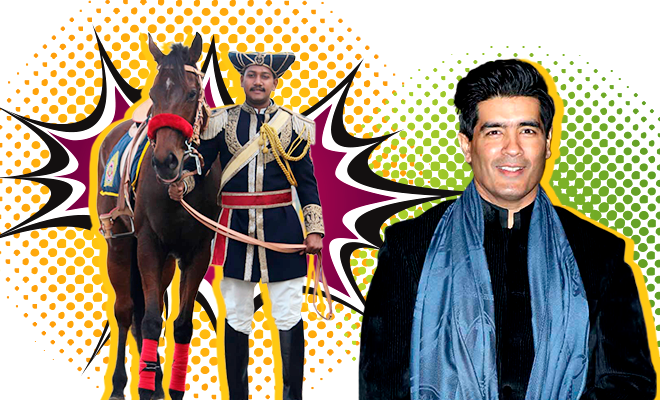 Manish Malhotra’s Design For The Mumbai Mounted Police Unit Is Impractical And Stale. We Feel For The Men Who Will Have To Endure It

Here’s something that every Mumbaikar knows for sure in their bones…it is ALWAYS hot out and horses and traffic are a pretty terrible match. This is why the announcement of Mumbai getting a ‘Mounted Police Unit’ came as a surprise to us. Maharashtra Home Minister Anil Deshmukh commented on the same, “Today, Mumbai police have modern jeeps and motorcycles. However, it was felt a mounted police unit would be useful for crime patrol in crowded areas. A policeman on horseback was equal to 30 personnel on the ground. The average speed of a patrolling rider will be more than 7 to 10 km than the one on feet,”, he elaborated.

This decision comes after 88 years since the mounted police were discontinued due to the rising number of motor vehicles being a nuisance for the horses. While this beautiful contradiction is an interesting piece of news in itself…out came the uniforms that have been specially designed for these men, apart from the sessions of show-jumping, tent-pegging, polo they’ve been put through.

In a series of tweets sent out by the Mumbai Police official account, the uniform can be seen in its full glory. Created by Bollywood’s favourite designer Manish Malhotra, the ensemble is, simply put, laughable. The uniform consists of a cropped sherwani,  hand-embroidered with threadwork all over the chest and sleeve hem. This has been further emblazoned with elaborate shoulder epaulets, a gold sash, and a red velvet cummerbund. We also see the policeman in a traditional Maratha warrior pagdi, with Indian breeches completing the look. Also, boots!

Regal in stature, Formidable in form, the "Mounted Police Unit" returns to Mumbai Police.
Thank you @ManishMalhotra for designing such an elegant uniform for our Riders.
Our Mounted Unit is sure to make a strong impact during law and order situations. pic.twitter.com/S0T6bcvdR9

Talking about the design, Manish commented, “It feels like full gratitude to be able to contribute in any way for the largest police departments in our country, Mumbai Police. We have designed the ceremonial uniforms of the horse-mounted police and are honoured to see the officers dressed in our uniforms,”.

Let’s put things in perspective. The garb, while ceremonial, is very reminiscent of colonial-era uniforms donned by British soldiers. We swear we have visions of Mangal Pandey (2005) screen grabs swimming in front of us looking at these. A sash AND a cummerbund, is there an excess in fabric problem in the fashion industry we are unaware of? The uniform is hardly practical as well. These men are expected to curb crime dressed like a fashion criminal’s wet dream, LOL!

We are hoping to take a look at the archaic mood board set up for the conceptualising of this design. There is also the issue of the whole thing looking like the sum of other parts we have seen already. If you have a well-known designer on board to create a look for you, shouldn’t it be an original?  This looks like it belongs in every other period film that turns up once in five years. Manish is, in fact, working on Karan Johar’s period film Takht and we suspect the leftovers from the set were stitched together to create this gaudy costume. Mumbai’s heat, humidity, traffic, and a general disregard in the public for niceties, the new uniform will be nothing more than a nuisance.

ALSO READ: A Government School In Kerala Has Introduced Unisex Uniforms For Kids And We Think It’s Genius!

What are your thoughts on the design? Let us know in the comments!

Charlize Theron Wore A Tiffany Bracelet To Hide Her Untouched Roots. We’ve Done That For Years And It’s Called A Maang Tikka