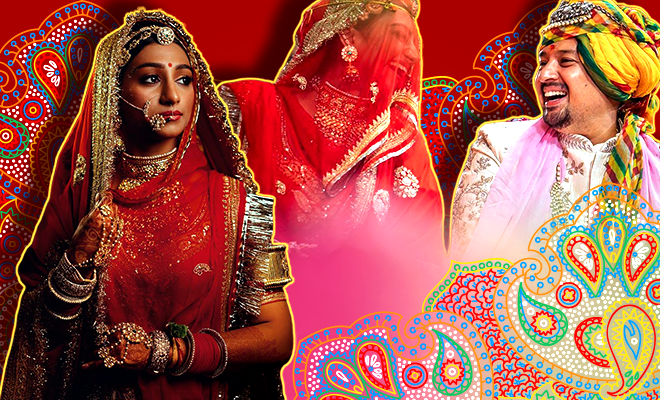 There are many things that make us butt heads with our parents in our day to day lives. There is a certain disconnect we sometimes feel between the generations, even if they have grown with the times. This is especially evident with daughters who are getting married in a family. With so may maamis and chaachis having a say about this ritual and that, it becomes difficult to maintain the harmony at a desi wedding. With Indian women aiming to break stereotypes and fight toxic patriarchy on the daily, updating our wedding rituals have become more necessary than ever. I still remember my sister breaking tradition and sporting the brightest smile during her vidaai, much to the chagrin of some of our relatives.

Having said that, we sometimes tend to forget that feminism is not just about fighting misogyny, it is, at its core the right of a woman to choose for herself, regardless of that being the “popular” choice. Most recently, we saw people getting it very wrong when actress/choreographer Mohena Kumari Singh (who is a literal princess IRL, just saying!) was criticised for wearing a veil with her ‘Rajputi Poshak‘ for her wedding. The newly married beauty clapped back with an eloquent response that offers a perspective that we don’t come across too often and we’re glad. Perhaps even do get very caught up in our own notions of what is right.

ALSO READ: 7 Hindu Wedding Traditions With Sexist And Bewildering Origins That We Can Do Away With Now

It all began when the Yeh Rishta Kya Kehlata Hai star took to Instagram to wish her followers a happy new year with a picture from her reception. This was met with a comment by user @minimalindian saying, “Why is your face under a veil?”. A chain of responses was posted by other users as well, particularly one from @jiyasarna (a page that has since been deleted by the user) saying, “because these are the people who follow their so-called male-dominated rituals. even education doesn’t give them a brain”. We appreciate there being a range of opinions out there, it is necessary to have these discussions in without being cute about it. But what’s with the obvious viciousness?

But turns out, such an attack does not phase Mohena who responded by commenting, “even Christians have a veil when they marry…and so do Muslims … I guess they are all uneducated too! It’s an age-old Rajput tradition that Rajput women follow when they get married. This was not forced upon me… I chose to do it”.

Mohena belongs to the royal family of Rewa and has always been vocal about her Rajput roots accepting openness, “The time has come for the royal families to stop imposing age-old rules and to change their outlook. I am aware of the strong opposition that will come from some royals, but, I want to follow my dreams and passion. I would want people to know me as an accomplished dancer rather than a princess. This is the first time anyone from a royal family has appeared in a reality show. I knew it from the day I auditioned for this show, that it would not be easy for my family to accept my decision. My father Maharaj Pushparaj Singh approved of me learning to dance as he thought it was just a hobby but he had warned me that I must stop it someday.”

The argument about the veil has been a constant theme in many Indian weddings these days. The reason being the obvious chauvinistic origins of the tradition, which we don’t intend to take lightly anymore. Much like any desi wedding garb, the Rajputi Poshak also originated as a by-product of women being required to cover-up as demure brides. But here’s the thing, why do we have to accuse someone of “playing along” with patriarchy if they choose to do for different reasons? Traditionally, the dress has four parts, namely, kanchali, kurti, ghagra and odhani. The odhani (dupatta) can be worn in many ways, choosing it as a veil being one of them. I have seen modern versions of this at my Rajput friend’s wedding, where she did not choose to do the veil, and that was totally okay by everyone present. Just leave it to the lady, shall we?

ALSO READ: The Bengali Bride’s Makeup And Fashion Comes Steeped In Lovely Traditions. We Have All The Deets!

As far as bridal trends go, the use of a veil has become more for aesthetic than an actual sartorial choice. I mean, why would you hide that million-dollar fact that you spent putting on after hours of hair and makeup? It just seems ridiculous. We saw Deepika Padukone pull a ‘veiled’ act with one of her wedding photoshoots, which was accepted as intended…a fabulous photo-op. Why does that have to be any different for when a woman chooses to do it? The obvious prejudice against a community is pretty evident in this instance and we are glad that Mohena spoke up against it. More power to you, superstar!