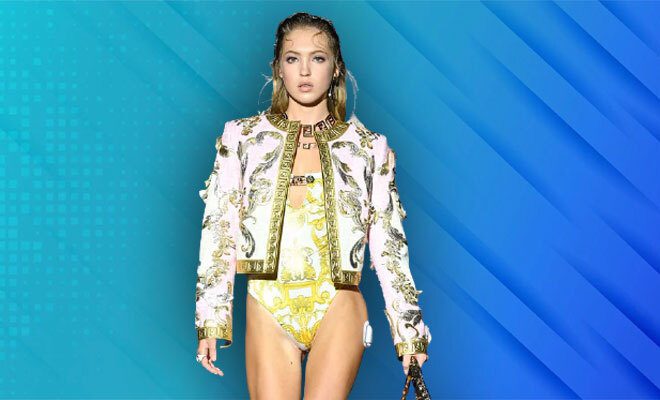 While growing up, we were told to hide our imperfections and sometimes made to feel ashamed/embarrassed about it. Carrying that thought further, for that matter, are fashion shows. Because the runway is, after all, all about perfection, confidence, and glamour. So, just imagine the surprise on people’s faces when they see a young model walk the ramp with something that many would label an ‘imperfection’ (even though it never ever was one) on full display. Yes, I’m talking about Lila Moss, daughter of supermodel Kate Moss, walking the ramp for the Fendi x Versace show while wearing an insulin pump. That was something!

Kate Moss’s daughter Lila Moss strutted down the runway for the Fendi x Versace show during Milan Fashion Week while wearing an insulin pump called an Omnipod. The young model has been diagnosed with Type 1 diabetes and hence needs an Omnipod on her to deliver insulin to her body.

18-year-old Lila Moss had her Omnipod, the insulin pump, attached to the side of her leg as if it were just another part of the gorgeous outfit she had on for the glamorous Milan Fashion Week runway. The nonchalance was empowering because it normalised the wearing of an insulin pump at a place that otherwise glorifies rather unrealistic standards of beauty, but can also be a place to make a statement about representation and inclusivity that drives change.

Lila Moss’ post received a lot of praise from the netizens and was flooded with comments from people that applauded her and thanked her for wearing her insulin pump on the runway. They even thanked her for representing people with Type 1 diabetes and giving them hope to achieve their drweams of being models on a runway some day.

Also Read: This Model Staged A Protest On Gucci’s Runway While Walking For Them. We Think It’s Incredibly Brave

Watching Lila Moss walk the runway for the Fendi x Versace show in the Milan Fashion Week with an insulin pump attached to her is honestly one of the best things I’ve seen on the internet recently. With her walk and her Omnipod, she sent out a message to everyone that fashion shows may be about perfection, but everyone is perfect in their own way . Lila Moss made it clear that imperfections are not something that need to be hidden or feel ashamed of. And for that netizens have shown massive respect towards her. And rightly so.

Gucci Sells A Kaftan For 2.5 Lakhs. We Give You Stylish Options That Won’t Break The Bank