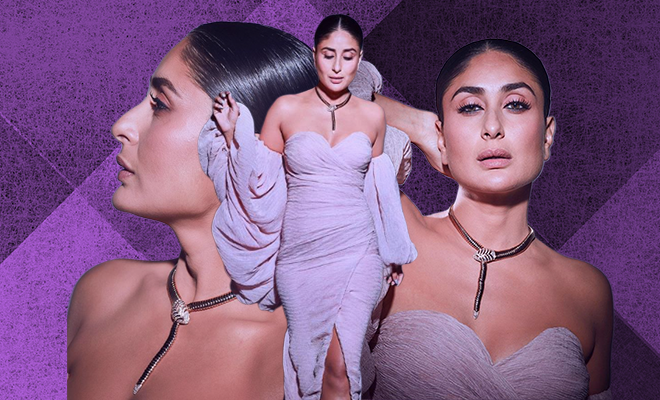 Kareena Kapoor Khan just presented her Dance India Dance finale look and it is a bittersweet moment for us. While her look was totally flawless, it also meant that her reign of being the best dress judge on TV is over. The Begum gave a 4 month-long streak of glamorous ensembles for her DID gig and we are honestly going to miss them. But turns out, Bebo saved the best for last. Her finale fashion has us in a trance because it is so deliciously *extra*, we can’t even deal.

Kareena put together the ultimate dream team to style her for the finale and boy, did it pay off. A combination of simple details made for a very unique sight. We are pretty sure they have never been done before, and quite possibly won’t be done in the future as well.

The reason why Bebo’s gown looks so fresh is that people don’t like to mess with the fabric crepe! The Yousef Aljasmi gown perfectly sews this tricky fabric into a sweetheart neck and fishtail silhouette. Honestly, the only association we have with this variety of crepe are the colourful streamers our mom put up during birthday celebrations.

Bebo managed “sell the garment” with her impeccable, smouldering stares into the camera, never once breaking character. The add-on dramatic sleeves also see to be becoming a thing with lavender gowns, Both Deepika and Kylie will approve (*wink*).

A middle-parted, sleek low bun? Really? If we tried to pull off this look, we’d look like an egg! Remember the dream team we mentioned earlier? Bebo’s hairstylist Yianni Tsapatori has indeed been creating amazing original looks with her. Put them together and you have the chicest lookbook on how to style thick straight hair. The understated glamour of this low bun comes from the little dollop of shine serum added to make Kareena’s hair glow. Tip noted!

So we have already spoken about how Kareena has changed the fashion game in Indian television with her DID stint. The actress has brought luxury labels to the small screens that reach even the most secluded areas in the country. But even that doesn’t come close to the timeless bling Bebo brought to the finale. Bebo paired her lavender with the timeless Bulgari Serpenti necklace, a style the luxury label started making way back in the 1940s. Anybody who has been anyone in the world of fashion has sported pieces from this collection. And now, Bebo!

Before we go, let us take a moment of silence to appreciate the near-perfect styling streak we have seen on Kareena Kapoor Khan for Dance India Dance. We bow down low, queen!