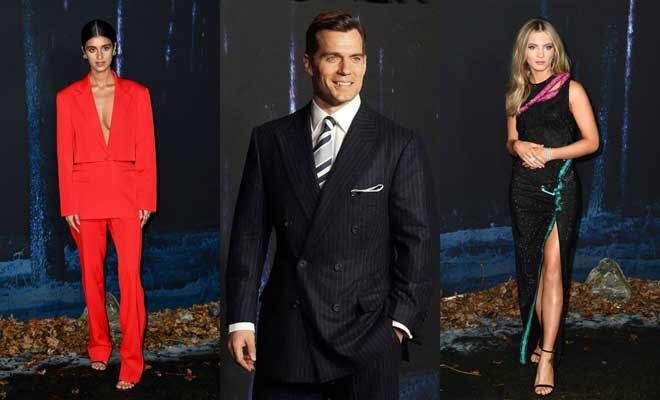 From Henry Cavill To Anya Chalotra, ‘The Witcher 2’ Premiere Red Carpet Was Starry And Gorgeous

Last night, the The Witcher 2 premiere was a star-studded affair, as the cast of the much-awaited second outing of the Netflix show, The Witcher, graced the red carpet for a special world premiere attended by fans in person and virtually. From deep blues, striking reds to regal black, the premiere night was a witness to many popular names, donning designer labels yet again. Taking the lead was actor Henry Cavil a.k.a Geralt of Rivia who made a rather special appearance with mom Marianne and his little pet dog (who sadly had to stay back in the car). Sporting a crisp tailored pinstripe suit, the actor’s look quite resembled his last visit to the carpet.

Joining him was co-star Anya Chalotra a.k.a Yennefer of Vengerberg, who made headlines two years back by opting for a Manish Malhotra sequinned white drape. This year, the British actress brought the red back to the carpet with an oversized button-down, J W Anderson blazer suit, styled with Dauphin rose gold earrings. The entire look was neat and a well-opted shift from the larger than life gowns.

Furthermore, actress Freya Allan who essays the role of Princess Cirilla in the fantasy drama, walked the red carpet wearing a black sequinned number from Versace. The front-cut, thigh-high silhouette stood out with interesting pink and turquoise details that bordered the entire dress.

Also attending the premiere was French actress Mecia Simson who joined the ensemble cast in The Witcher 2. Rocking the thigh-high slit dress in a black and faun, semi-sheer gown, she definitely did not let the chilly weather bring her down!

Actress Anna Shaffer who portrays the character of Triss in The Witcher, chose a deep blue one-shouldered dress, with an eye make-up blending well with the ensemble. Actress Therica Wilson-Read (Sabrina) went for a subtle black jumpsuit and a diamond neckpiece.

Based on the series of novels by Polish author Andrzej Sapkowski, the highly-anticipated second season of The Witcher will witness the return of Geralt of Rivia played by actor Henry Cavill and his destiny. You can catch all the new episodes of the season on December 17, 2021, exclusively on Netflix.