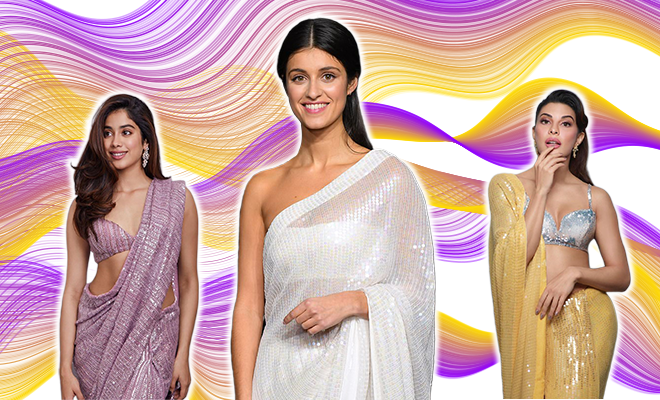 2019 was a great year for Indian fashion. We saw our leading ladies in desi drapes on global red carpets, international celebrities embracing Indian designers more than ever and just an explosive Asian invasion in the fashion sphere. Back home, the year was about a mix of homegrown and global trends dressing our stars, and sometimes, us. One of these cult-fave trends back home that took the party scene by storm was the cocktail saree, sequinned to the gods and sheer to the point of making a sexy siren out of a plain Jane!

To wear this saree is to wear the hottest trend of the season. The Manish Malhotra staple had many takers this year. Our fashionable stars couldn’t get enough of cocktail saree, creating their own interpretations of it. But it looks like this saree is transcending borders and has struck the fancy of a certain Indian-origin actress, the beautiful lead of Netflix’s The Witcher, Anya Chalotra.

The actress walked the carpet at their London premiere last night in a white drape from Manish Malhotra’s popular saree series this year. Joined by the internet’s favourite boyfriend Henry Cavell, the show has already created much buzz among viewers. The 24-year old belongs to a British-Indian family, her father being the desi connection for her. The actress kept the look very minimal with almost no accessories, a bandeau blouse, and a fresh blow-out fastened with a center part. This is such a statement Indian look, we wonder who she looked up to create it. Could even be her father’s recommendation, we don’t now!

In a feature with Vogue, Anya confessed to being intrigued by her Indian roots, hoping to explore it further now that her job is taking her all over the world, even visiting India. Talking about her start as an artist, she confessed, “I think I was eight? We were having a family get together and he told me to sing an Indian song. And I knew, at that very moment, that I loved the attention.” I find it exceedingly charming that Anya chose a saree for her first major movie role’s opening. And props to stylist Holly White, she looked absolutely stunning.

ALSO READ: Sheer Cocktail Sarees Are Going To Be Our Pick For This Shaadi Season. And These Celebs Are Serving Up Some Inspo

This particular saree’s popularity has proven that women don’t really care about pricky sequins draped around their arms and we can relate. The saree is already such a sexy garment, wear it however you like at a party and you’re golden. Some of the leading styles we have seen them being done are casual pallus, bralette blouses, and loose pleats. Switch up your LBDs with the statement 9 yards this party season and watch heads turn!

The Witcher is a highly anticipated fantasy production among audiences, especially fans of the epic show Game Of Thrones. It is slated to stream from December 20th and we are excited!