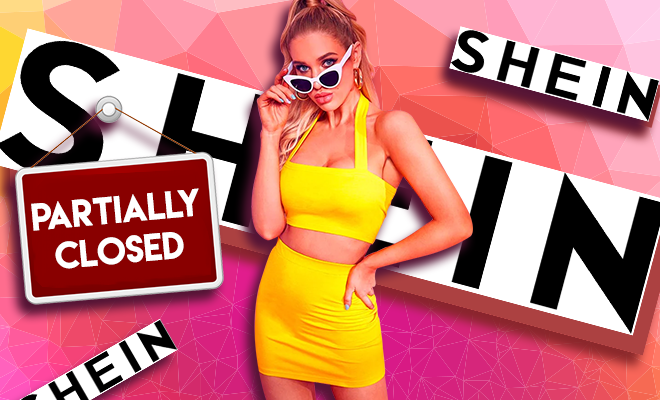 Our sceptical desi parents have been proved right again and this time it’s regarding Chinese maal! The popular online store Shein was recently stripped down by Mumbai Customs for some of its practises and Shein is bearing the brunt of being dismissive of the regulations in the country. The website is quite popular with college going girls and young millennials in the country. With its huge inventory of trendy designs and colours, almost everyone has given Shein a try, some even getting addicted to it! *points to self*

Itried to buy a polka dotted dress just last night but didn’t because of a very weird message that popped up on its main page. “We are upgrading our systems for newer experience, with fresh looks and exciting offers. Request you to hold back for some time while (you) watch this space for more,”, it said.

Apparently, this “cute” cover-up was to hide the fact that they had a warehouse sealed in Mumbai for undervaluing and wrongly declaring goods.

Here’s how Shein became such a big part of our shopping behaviour. The website was designed with an aesthetic to look like a budget Boohoo or NastyGal alternative. The prices were unbelievable for fabrics that are actually sturdy (questionable). Then came the vote of confidence from some of the most popular Indian bloggers who have a huge following of young and impressionable women, basically Shein’s target customers.

The website has had to cancel and refund many orders in the past month. Their mails said, “Major items on shein.in is imported in bulk and then dispatched. Due to customs clearance issue for import, there is no certain release date till now. To protect your interest we will cancel the order ….. & arrange refund at the earliest,”.

A deep dive from the Economic Times has revealed some pretty shocking details about their logistics. It talks about the business model of Chinese etailers and said, “Items are packed and shipped for individual customers, similar to how you get a package from Amazon at home. But these companies act as a bulk purchaser in which the value declared is 300 to 400 per cent less than the actual value of items,” the report stated.

The report also revealed that platforms like Shein, Club Factory and Ali Express often disguise their shipments as “gifts”. As per Indian law, any gifts received by Indians up to Rs 5,000 don’t attract any taxes. This loophole has been exploited by these major Chinese sellers and has been one of the main reasons their operations are under the scanner . The website’s operations have been dialled down for these reasons, with newer orders being pushed out through third party sellers. “While Shein’s operations have been majorly affected due to bulk imports, other players such as Club Factory have already reduced their dependence on their own imports and instead attempting a marketplace model,”, the report revealed.

Given that how much Shein has managed to penetrate the Indian market, it will be interesting to see the reaction to this reveal. We personally are quite turned off by it and are planning to pause our purchases until their practices are revised and fixed. It is the Indian economy that suffers due to such faulty practices and hope Indian consumers will act responsibly going forward. What are your views on it? Let us know!