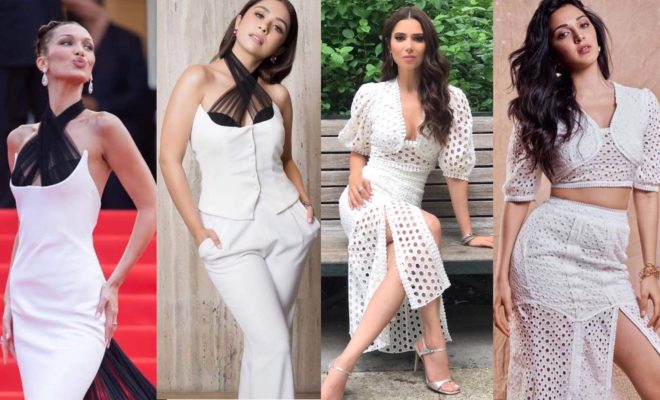 Diet Sabya Calls Out Designer Sonaakshi Raaj For Designing A ‘Gandi Copy’ Of Bella Hadid’s Cannes 2021 Look! I Mean Why?

Inspired or copied? Well, that’s something we’ll never know. Amidst the clutter of emerging designers in the Indian fashion universe, what is blooming at an alarming rate is the alleged inspiration drawn by young talent from successful masterpieces crafted by global luxury giants. Be it a print, silhouette or a particular design language being translated for the Indian masses, many designers are travelling the ‘oops’ road time and again. Pointing at the replication of varying degrees, the fashion police have certainly found a face in the popular Instagram account called Diet Sabya, which itself is an Indian version of the infamous Diet Prada. Dialling the hotline, each time designers put their best blunder forward, the account has been keeping an eye on replicas. A much-needed policing we required for the Indian fashion market, the idea of calling out designers who feed off of international designs is imperative. And in a recent turn of events, designer Sonaakshi Raaj, who is known for dressing up celebrities like Sanya Malhotra, Kiara Advani and Jacqueline Fernandez, was called out for copying a piece from designer Jean Paul Gaultier’s haute couture spring/summer 2002 (quite shocking).

Striking an uncanny resemblance to the Jean Paul Gaultier design, Sonaakshi Raaj’s co-ord set caught itself in a trouble. Earlier worn by supermodel Bella Hadid who brought the designer piece to the spotlight again, at the Cannes 2021. The white cross-strap, with a dramatic train following the column gown, reappeared in a cropped out co-ord set version by designer Sonaakshi Raaj who wore it for the Golden Glory Awards 2021.

While it’s not the first time, that the designers were called out for duplicating or reimagining an existing popular creation. Recently designer Mayank Chawla found his name popping on the internet, for copying label DSQUARED2’s designer jacket. The piece was worn by singer/actor Hardy Sandhu for the  premiere night of the Ranveer Singh starrer film 83. Many times, stylists and actors including Kriti Sanon, Gauhar Khan, Shraddha Kapoor too found themselves in the plagiarism talk.

Taking the “tailor bhaiya, Manish Malhotra wala pink lehenga chahiye” conversation a little too ahead, fashion time and again has been put through testing days. From bigger brands to celebrated designers, creators have definitely become a little mindful of the pieces they craft and put out for public consumption. In an attempt to preserve their own artistic ideas from being found in the streets of Mumbai and Delhi, designers are keeping their distance from neat plagiarism.

Talking about the legal periphery, the Design Act 2000 consolidates and amends the law relating to the protection of designs. With an aim to protect original designs from rampantly being multiplied, the act safeguards the proprietor from bearing any losses. Falling into a sector that is prone to updates, the fashion law deals with copyright, trademark, designs, patents and licensing, actively practised by designers like Tarun Tahiliani, Ritu Kumar in order to protect their designs and trademark. But all things said and done, many designers are still taking the short route, which doesn’t look too cool. And with the progression in years and skills, all we can say is that the Indian fashion world is taking steps in the right direction, slowly but surely.