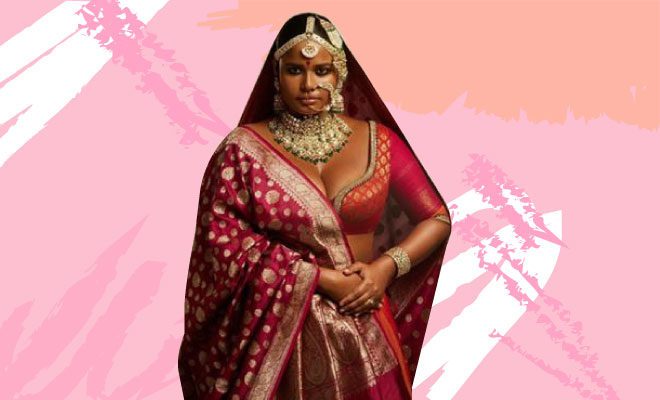 There a few topics that if you broach, will wind me up so much that I’d give you a week’s worth of TED Talks on it at a stretch. One of them is fat shaming, which I feel totally entitled to talk about since I am it. Fat. It’s a fact, so there is no point tiptoeing around it. I am a fat 30-year-old unmarried Indian woman who gets enough grief over not finding suitable prospects for marriage because of my weight. Doesn’t matter what my salary size or the size of my achievements. My waist size in inches determines if I get to have my preferences in a life partner acknowledged, his ‘inches’ (in every way) notwithstanding. But even if somehow I magically evade this judgement, there’s many a slip ‘twixt the cup and the lip. Before I get to my happy day, I have to endure some more fat shaming from bridal wear brands that I’ll be shopping at. And if you say, “But guys, body positivity movement has made a difference, na?” let me steer you towards this Instagram discussion initiated by influencer Dr. Cuterus, fashion watchdog Diet Sabya and a bunch of others.

If you’re a woman following conversation around sex and sexual health, chances are you’ve come across Dr. Tanaya aka Dr. Cuterus, who is known for her easy explainers on these very subjects as well as a bunch of other health related topics. She recently posted a picture of her wedding day, but the context of this post wasn’t exactly joyous. In fact, she wrote a lengthy caption calling out society’s incessant need to tell brides that their bodies are not perfect and that they need to lose weight before their wedding. It’s not just to look good in photos because “Oh horror! Double chin! Tummy! Flabby arms!” It’s also because finding a bridal lehenga will be a Herculean task.

And that last bit, though outrageous, is the sad, disappointing truth. It is super, super difficult to find good plus size clothing in India. And I can vouch for this because I, a privileged city dweller, get most of my fashionable clothes from countries like USA, where plus size fashion is available for every budget, and in most brands. But that’s western wear. For Indian clothes, you’d think INDIA, the country that this dress code belongs to, would have a better market that caters to every woman, irrespective of shape and size. Turns out, NOPE!

As Dr Cuterus talks about in her post, before her wedding, she was constantly ‘suggested’ by her friends or relatives that she ought to “do some dieting” because apparently that’s what all brides do. Moreover, when she went in search of her bridal outfit, she was fat shamed by the people in these bridal wear brand stores! She named one particular designer, Tarun Tahiliani, and their Ambawatta store for body shaming her. Tanaya also dropped a line on how big designer brands like these simply refuse to acknowledge women with bigger breast sizes in their clothing choices.

If you like the lehenga she has sported in the picture, in which she looks beautiful and happy, she also reveals that it was from Anita Dongre, where she was well received, and given a bridal outfit that was customised to fit her curves perfectly.

Also Read: Why The Sabyasachi Plus-Sized Model Post Isn’t All That Offensive

The post was instantly picked up by Diet Sabya, who keeps a hawk’s eye on such important conversations and amplifies them, while also giving a forum to others to share their stories. And boy, the stories that poured in made me, a fellow ‘big girl’ if you’d say it, feel some major solidarity. Because god knows the plus size shopping situation in our country is so terrible. Not only do plus size men and women have to pay more for their clothes, these clothes are always much behind the current fashion trends. So you’ll some of the most basic-ass checkered shirt, or a t-shirt with a horizontal stripe, and it will be priced at a thousand bucks a pop, easy! I’m sorry, what?

What’s possibly worse is that there’s zero risqué factor in these outfits. Take bridal lehengas, for example, which as we have seen, have come so far with blouse designs and more. But if it is for a plus sized bride or a bride with a heavier bosom, the outfit will suddenly be all closed-up necks and zero cleavage, no proper form or fit and almost tent-ish, and the most outdated design you’d have seen. There will be limited pieces too. And once if you somehow convince yourself to compromise on all these fronts, or if you’re lucky, find the perfect outfit for your big day, you’ll be spending more than a regular-sized bride would’ve on the same outfit from the same designer.

Diet Sabya posted on its Instagram asking people to talk about bridal brands fat shaming brides who come to their stores, thinking they’d finally get to fulfil their dreams of donning this designer lehenga they’ve always wanted. Ek toh, that’s a whole other problematic thing where women are conditioned to think if they don’t wear a particular designer’s clothes for their wedding, it is all a colossal waste. But let’s save that for another time. Let’s talk about the replies that poured in on the post.

There were many, who like Dr. Cuterus, called out the folks over at Tarun Tahiliani store for fat shaming. But another name that came up multiple times was the Sabyasachi store in Delhi. This is particularly bothersome, because the most coveted Indian bridalwear designer, who has reaches until Hollywood and beyond, has often been praised for showcasing his collections on plus size models as well. So this complaint that has been dropped about his Delhi store shows a massive disconnect between the brand values and the people employed in the forefront of the brand’s brick and mortar stores.

Another user who replied in the comments touched upon an infamous interview that designer Falguni of Falguni and Shane Peacock label had done with NDTV good times in 2019. In the interview, Falguni is seated next to Sara Ali Khan, when she is asked by the interviewer for advice she’d give to plus-size brides who are picking their bridal outfits. I wouldn’t want to spoil this for you, but well, Falguni very clearly said that while she wouldn’t be direct about it, she’d ask the bride to “lose a few inches” before her wedding since she has time. When the interviewer prodded further for an alternative, the designer who’s label has dressed the likes of Beyoncé, Rita Ora and a bevy of Bollywood stars, dropped some pretty infuriating ‘suggestions’ on what plus size brides shouldn’t opt for.

When she was called out for her views, the designer, following a tried and tested script, apologised for hurting sentiments and talked about how this wasn’t her intention since she herself has struggled with weight issues all her life. Sigh.

Many people also called out how Sara Ali Khan, who was herself a plus sized girl before she entered Bollywood, quietly let this conversation happen and did not call Falguni out.

The discussion then didn’t restrict itself to just fat shaming in bridal wear brands, but also expanded to fast fashion brands like Zara and H&M, championed by many Bollywood leading ladies who have otherwise been vocal on issues like mental health and women empowerment. So what, the damage to mental health caused by fat shaming isn’t real? Moreover, these celebrity fashion brands by Deepika Padukone, Anushka Sharma and more aren’t size inclusive either, with most size charts ending at XL, which is a waist of 34 inches and a bust of 40 inches—not exactly for everyone.

Another user who commented on the post addressed how it isn’t exactly rainbows and unicorns for plus sized men either. If anything, their fashion choices are severely limited to the most basic designs and colours, and there aren’t enough male plus size models in the industry!

Circling back to the conversation around bridalwear, which is such a booming industry right now, it feels ridiculous that designers would not even consider customising their outfits for the bride’s taste. Especially when their brand’s, no scratch that, their entire multi-billion dollar wedding industry’s brand proposition hinges on making the bride feel special and the most beautiful on her special day! I mean, it’s kind of basic customer service sense that you keep the client happy, and not badger them with taunts about their appearance or turn them away because you’re filthy biased! At a time an age when social media can be used by the bride to out your prejudice in just one post, how could brands and designers and their teams be just so effing daft?

Personally, in the next couple of years, I too am likely to be up against these fat shaming bridal brands. And I already dread it. But maybe I don’t have to wait too long. I have a cousin’s wedding coming up which means I’ll be out shopping and turned down by most designer brands, either because they don’t have my size, or they do but it is tonnes of expensive.

I don’t know really. Do the math. I keep hearing that there isn’t enough market for plus size fashion in India like there is in USA. But look at the number of women outraged over these incidents! The average Indian woman is curvy, and if you can’t cater to your widest (pun intended) customer base, you need to shut shop. Or the customers you displease will do it for you. The saavdhan in this shubh mangal saavdhan is for you, fat shamers. You’ve been warned.