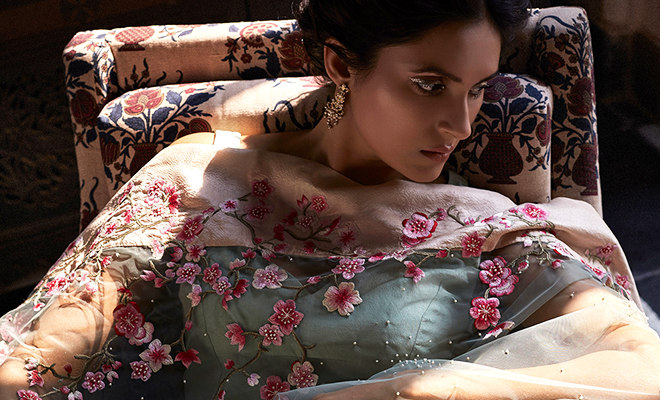 Celebrate The Evolution Of The Saree With Good Earth

Luxury store Good Earth will be celebrating 3,000 years of the graceful and elegant Indian garment, known as the everlasting saree. As a tribute to the gorgeous garment, the leading design house will be featuring the evolution of this 7-yards-of-style, which is the epitome of Indian culture, through various newer Indian labels. Showcasing designs that embrace and celebrate the sustainable Indian garment with contemporary renditions, it will run from the February 17 – 19 at the Good Earth Store in Raghuvanshi Mills, Mumbai.

The Journey Through Time

The saree is one staple piece of Indian clothing that has been donned through centuries. Dating back to the Indus Valley Civilisation, its origins are said to go all the way back to 2800-1800 BC, brought on by the Mesopotamians. Seen as grace in its true form, sarees are said to embody the femininity of a woman. The word ‘saree’ loosely translates to a strip of untouched cloth, which was how it was originally meant to be (according to some religious beliefs, stitching a cloth made it impure).

Did you know that the first sarees actually worn were without an upper covering? Yes, they were tied on like dhotis and eventually, during the Mughal era, a breast band was added to hold the fabric together, which was a sign of the upper class. You’ve probably noticed the lack of a blouse in sculpted depictions on temple structures. Beautiful, right? The saree then went on to face the British era, and boy, did it stand the test of that time. This was when the traditional Indian drape got a western makeover, where the blouse was introduced — but in the form of a shirt and people even paired it with jackets, in order to cover the midriff. This trend has returned today, with designers swapping the choli for a crisp shirt and frill jackets. Guess fusion fashion was even a thing back then?

Nowadays, while the essence of the traditional saree still remains, the overall look has been converted to look more modern. Designers have paired the pleats with so many other fusion elements, such as pants, dhotis, jackets, shirts, and the ‘pallu‘ and the ‘pleats’ have been the main focus of many of the looks. Designers such as Payal Singhal, Eka, Payal Pratap, Kiran Uttam Ghosh, Masaba, and Tarun Tahiliani have given this 7 yards of style a contemporary makeover. Taking itself across international waters as well, the style was spotted in modern takes on several celebrities by various global designers. Over the years, this sensuous symbol of our tradition has taken turns towards a more modern India — with newer fabrics, styles, crafts, weaves, and drapes!

Besides the style of a saree, what absolutely stands out are the prints, dyes, and textures that are created. Back in the day, textiles were naturally dyed with turmeric, tree-barks, and even the indigo plant. During the Mughal reign, textiles were introduced to hand-block printing and tie-dying techniques, which created a whole new style of sarees — bandhanis and leheriyas seemed to be a favourite post this. The Mughals had also perfected detailed and intricate stitching, which, till today, resonates internationally as ‘brocade’ — back then, it was seen as luxurious and exquisite. Since weaving was a ‘thing’ in India for the longest time, designers of the country developed a treasure-house of creative concepts reflective of the heritage. Paisley prints, Jamawar weaves, floral designs, and brocade motifs were eventually associated with the ‘traditional’ saree, mainly focusing on colours that suit the Indian skin tone. With the influence of the European arts, motifs got a French, Portuguese, and British touch to them, which were a lot more subdued compared with the regal Indian ones.

Here’s what to expect from Good Earth’s showcase, which celebrates the ‘saree’.

Minimalistic Traditions
Contemporary sarees in subtle neutral hues of white, cream, beige, and grey is what Anavila is all about. With hand-block prints and embellishments, using natural dying techniques, Anavila takes authentic sarees that are functional and makes them edgy with a chic drape. Talking about natural dyes, Eka isn’t one to miss out on this time. Bringing a breath of summer air to traditional textiles, this collection has a European flare that is handcrafted in natural fibres. Keeping tradition intact, Raw Mango brings handwoven sarees that are simplistic yet sophisticated. The collection uses contemporary designs, crafted with age-old Indian techniques.