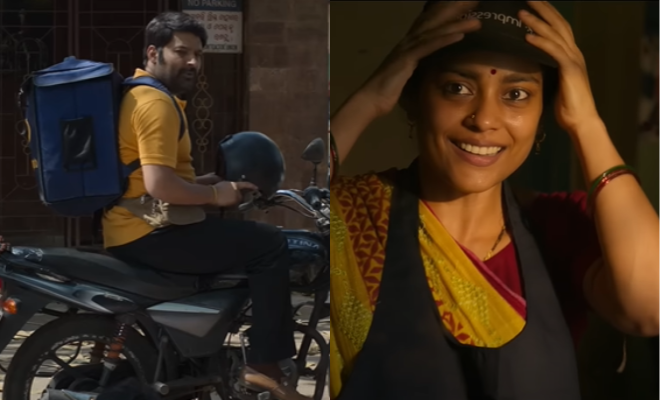 Ordering food from food delivery apps has become a habit for most of us, na? The comfort of ordering food and having it delivered to your doorstep with just a click is a luxury in itself. But most of the time, we do not tend to pay attention to the struggles of the delivery guys who are the ones who are toiling to get our food delivered to us. Nandita Das’ new film, Zwigato, has shed light on these struggles of the food delivery guys. The movie stars Kapil Sharma and Shahana Goswami in the lead roles, and its trailer was dropped today. The movie premiered at the Toronto International Film Festival 2022 and now also has been selected for the Asian Premiere at the Busan International Film Festival.

The trailer of the film starts with Kapil Sharma’s character holding a stack of food boxes from a restaurant and entering a building to get it delivered. But the lift of the society has a board that says that delivery boys are not allowed to use the life. So, he climbs up a flight of stairs, holding the stack of boxes and having a huge bag on his shoulders. The door to the house he has to deliver food to is slightly ajar and he sees that a man is passed out on the couch in the living room.

A cursory glance at the surrounding hint that a party was organised last year as beer cans and other items are scattered all over the floor. Kapil also tries to wake the man up to tell him that he has come to deliver the food but the man is too hungover to even respond!

The next frame sees him leaving his house and announcing that he will complete 10 deliveries today. The one-minute-39-second video goes on to shed light on his daily struggles of wanting to get the highest ratings and how his wife, played by Shahana Goswami, also complains about it. She says that when he was working in the factory, his hard work was at least noticed. But in this food delivery business, there is no one to see it. His wife is also seen getting an opportunity to deliver food but it is a night shift. One shot in the trailer also shows how much getting an order cancelled or declined affects him and he throws his phone in frustration.

Having Nandita Das cast Kapil Sharma for a role as serious as this has us looking forward to the film. Given how Kapil is known for his slapstick humour, I wonder how Das would have moulded him into this serious character. Additionally, Shahana Goswami has always shouldered such films and has played characters that have depth throughout her career. So, it will be interesting to see her play Kapil Sharma’s wife in the movie.

From the trailer, it looks like Kapil Sharma has put in hard work to look and play his part. Looks like this will a worthwhile film to watch! The release date of Zwiagto has not been announced yet.