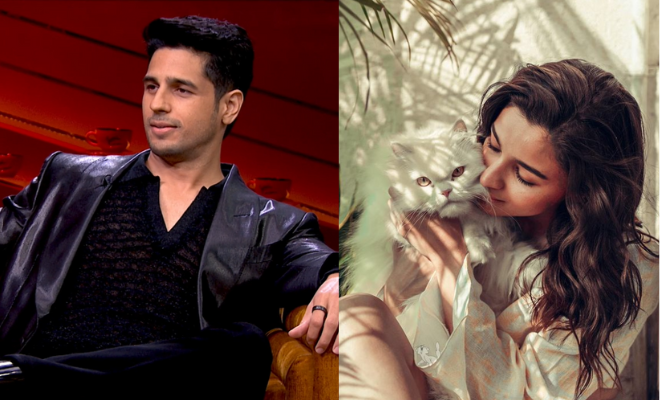 The latest episode of the Koffee With Karan season 7 was dropped on Wednesday at midnight. Ever since the episodes have begun dropping at midnight, the world literally wakes up to the gossip and other juicy details the stars revealed on the show. Crazy na? The guests for the latest episodes were Vicky Kaushal and Sidharth Malhotra, both of whom bought their Punjabi swag on the couch! I will not be lying if I say this was one of the most looked forward to episodes of this season so far because honestly, look at the past couple of ones! So boring! Coming back to Vicky and Sidharth, they not only bought their yaarana to the show but also spilt deets about their personal lives.

During the rapid-fire round, it seemed as though Sidharth hinted at Alia Bhatt. The question Karan asked him was what was that one thing he missed about his ex. And to this, Malhotra rapidly replied by saying, “Her cat.” Hmm, well the math here was easy to do as the only known ex that had a cat and whom Sidharth seemed to have dated is Alia Bhatt.

Alia’s love for her pet cats is not known to anyone, especially to those who follow her on Instagram. She often shares cute pictures with Edward, her cat BTW, on the gram. Sharing pictures from the wedding photo shoot, Alia posed with Edward, who was the ‘cat of honour’ for the occasion.

Also read: ‘Koffee With Karan’ S7 Ep 7 Review: Punjabi Mundas, Sidharth And Vicky Made The Show All About Ki And Ka

Sidharth Malhotra and Alia Bhatt made their debuts in the industry together with the 2012 film Student Of The Year which was a Karan Johar directorial. There were reports of them dating as well.