Katrina Kaif And Hubby Vicky Kaushal Look All Chilled Out As They Go On A Sweet Dessert Date In The US! 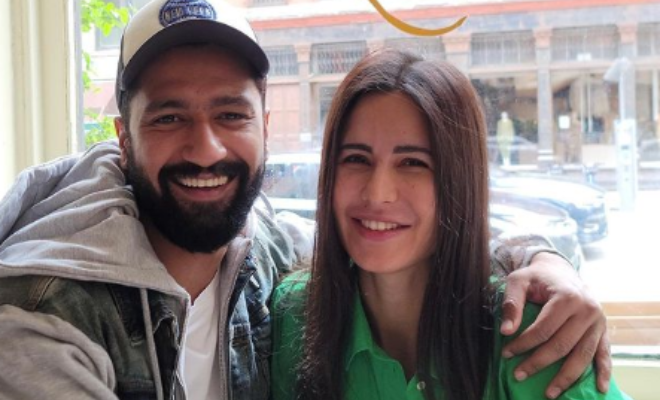 Actors Katrina Kaif and Vicky Kaushal make for one of the cutest couples in the film industry and there is no denying that! The couple tied the knot in December 2021 and had a typical big fat Indian wedding, might I add. Vik-Kat, as they are lovingly shipped by their fans have been sharing pictures from their outings and together ever since, to give their fans a peek into their lives. Recently, it appears that the couple was out on a dessert date while on their trip t0 the United States. Katrina and Vicky took to their respective social media accounts to share photos of the same as well.

Taking to his Instagram handle, the Uri actor shared a photo of him and Katrina crossing the street. Vicky is seen wearing a denim jacket and pants with a white shirt whereas Katrina is wearing a green shirt, denim pants and a thick jacket. Kaushal captioned the post as ‘sugar rush’.

Katrina, too, shared a couple of photos sitting inside the restaurant called Bubby’s which is located in New York. Among the photos that she shared, there was a picture of the pancakes and strawberries they had! Not gonna lie, this does look yummy! In the caption of the post, the Bang Bang actor could not stop gushing about how Bubby’s is her favourite restaurant. She wrote, “The Home of EVERYTHINGGGGGG , my favourite place ever Bubby’s”, followed by a pancake emoji and a couple of celebration emoticons.

It appears Katrina Kaif and Vicky Kaushal are enjoying their time in the US!