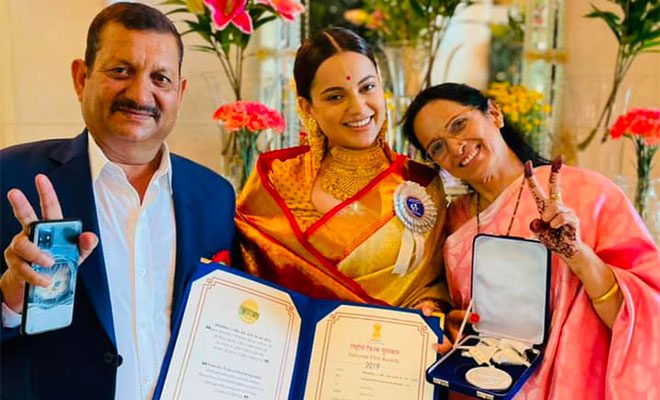 Amidst the not-so-pleasant time for Bollywood, the 67th National Awards were presented at Vigyan Bhawan in New Delhi. The Vice President of India, M. Venkaiah Naidu, presented the awards to the winners, including Kangana Ranaut, who won the National Award for Best Actress for her films Panga and Manikarnika. Other winners included Manoj Bajpayee, who won Best Actor for his incredible performance in Bhonsle, and Dhanush, who won for Asuran. Today is also the day that superstar Rajinikanth will be presented with the Dadasaheb Phalke Award for his contribution to Indian cinema.

The Vice President presenting the 67th National Film Award for Best Actress to Kangana Ranaut for her performances in the films 'Manikarnika' and 'Panga' today. #NationalFilmAwards #KanganaRanaut pic.twitter.com/rtsBfPTPyi

The Vice President conferring the 67th National Film Award for Best Actor to Manoj Bajpayee for his performance in the film 'Bhonsle' in New Delhi today. #NationalFilmAwards #Bhonsle @BajpayeeManoj pic.twitter.com/u94IJnc4np

The ceremony was a rather emotional moment for director Nitesh Tiwari, as his film Chhichhore, starring the late Sushant Singh Rajput, won the Best Hindi Film National Award. Tiwari and producer Sajid Nadiadwala were present at the event, and spoke about missing the actor, dedicating the win to him. It was also quite a joyous occasion for the Tiwari fam, considering Nitesh’s Best Film win, and the Best Actress win for Panga, which is a film by his wife and filmmaker Ashwini Iyer Tiwari, the screenplay for which was also written by Nitesh Tiwari.

Kangana Ranaut shared pictures of herself with her National Award, and her parents by her side, proudly posing and all smiles.

Best Ethnographic Film: Charan-Atva: The Essence of Being a Nomad (Gujarati)