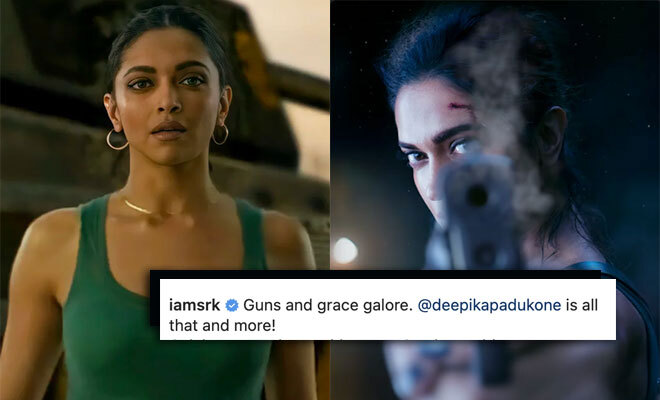 Recently, a new poster of Shah Rukh Khan from his upcoming movie Pathaan was released. It had created a buzz among the audience as the look was so intriguing and intense. Simultaneously various speculations about  Deepika Padukone’s role in the movie were also being made. But the wait has now come to an end as Deepika’s first look from the film is here and she looks equally intriguing and impressive.

Pathaan, directed by  Siddharth Anand will be released under the YRF banner and is one of the most anticipated films of Shah Rukh Khan and Deepika Padukone. After Shah Rukh Khan’s look from the movie, the makers have now dropped Deepika Padukone’s look and we are surely up for some deadly actions by the actress. A very short video teaser of Deepika’s look was released on the official Twitter handle of the Yash Raj Studios. The graphics of the video is amazing. Deepika’s look gradually builds up in the video. In the first glimpse, there is a very close look of a bullet fired from a gun, and slowly the bullet disappears to give you the look of Deepika Padukone. In this glimpse, you can see a bold, intense, and fierce look in Deepika’s eyes. The actress can be seen holding a gun, so you don’t get to see her full face, however, Deepika’s eyes speak enough. There is also a scar on the character’s forehead, so we can anticipate some real action from Deepika in Pathaan. The tweet also gave us a hint of some action from Deepika’s character by saying “She is ready to shoot it up a notch”. In the tweet, the release date of the movie was also mentioned which is January 25, 2023, and the film will be released in three languages- Hindi. Telugu and Tamil. Along with Shah Rukh Khan and Deepika Padukone, John Abraham will also be seen in the movie and his look is yet to be revealed.

She’s ready to shoot it up a notch! Presenting @deepikapadukone in #Pathaan
Celebrate #Pathaan with #YRF50 only at a big screen near you on 25th January, 2023. Releasing in Hindi, Tamil and Telugu. #6MonthsToPathaan pic.twitter.com/Hr9woOSlvd

Shah Rukh Khan also took to his Instagram handle to share the look of Deepika, calling it “grace and galore”.

Cannot wait to see the movie now, the looks are gradually increasing the anticipation.