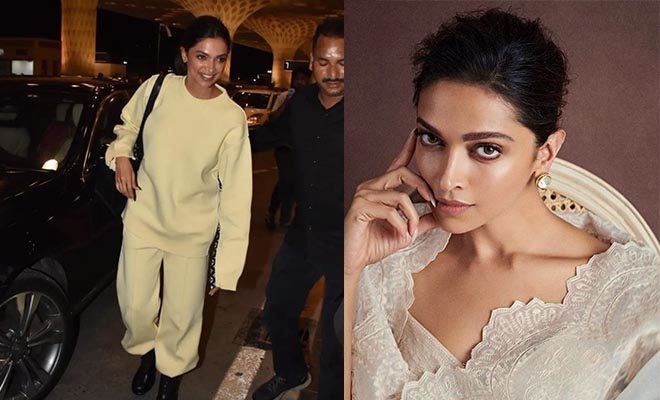 Isn’t it a proud feeling when an Indian personality represents the country internationally or on a global stage? And ever since our favourite Deepika Padukone has been announced as the only Indian artiste to join the jury at the 75th Festival De Cannes, we’ve been waiting to watch our beloved Shanti Priya rule the red carpet. While it’s almost time for the year’s most-awaited week of Cannes, the preparations have already begun. Ahead of her appearance at the prestigious film festival, Deepika Padukone was spotted at the Mumbai airport, as she took an early flight to act upon her duties as a part of an eight-member jury led by French actor Vincent Lindon. Apart from Deepika, the prestigious jury also has members like Italian actress Jasmine Trinca, French director Ladj Ly, actress-screenwriter-producer Rebecca Hall, and American director Jeff Nichol.

While each of Deepika’s airport visits is high on sartorial finesse, this one was brought to our screens by Louis Vuitton. Yes, the French luxury brand for which Deepika is reportedly set to turn the global ambassador, has been dressing the star in its beloved pieces. Deepika was seen wearing a pale yellow co-ord set, with black details around the sleeves and a pair of black boots serving as the perfect match. The Gehraiyaan star is also expected to walk the red carpet on all 10 days, and we can’t wait to see her impeccable style statements.

A regular attendee at Cannes Film Festival, Deepika Padukone also turned into the cover star of Vogue ahead of the prestigious film festival. Turning muse to Louis Vuitton again (a lot of hints DP), Deepika was dressed head-to-toe in LV. Keeping it casual, but not so cool, this first big appearance showcasing Ms Padukone’s association with the French luxury label didn’t make a mark.

Also Read: Deepika Padukone Turns Muse For Louis Vuitton At The 59th Venice Biennale. Well, Our Leela Is Rocking And How!

And many disappointed fans soon rushed to the comment section and complained about the lack of creativity. In an exclusive chat with the fashion magazine, Deepika also spoke about her career spanning 15 years. Unravelling some details about when it all started, the Ram-Leela actress shared how entering Bollywood was like travelling the tough road. She also revealed how her, “South Indian accent was also frowned upon” and she “initially worried about being written off because of it.”

Well, expectations take a flight, when it’s Deepika. And with Ms Padukone playing the main character at such a celebrated global event, we just hope, her fans are not offered a tough spot to criticise. We’re looking forward to some smashing lewks, right Shaleena Nathani?

The Cannes Film Festival will begin on May 17 and the jury will announce this year’s winners at a gala ceremony in Cannes on May 28.

Cannes Film Festival 2022: Deepika Padukone To Be One Of The Juries On The Panel. We Couldn’t Be More Proud!