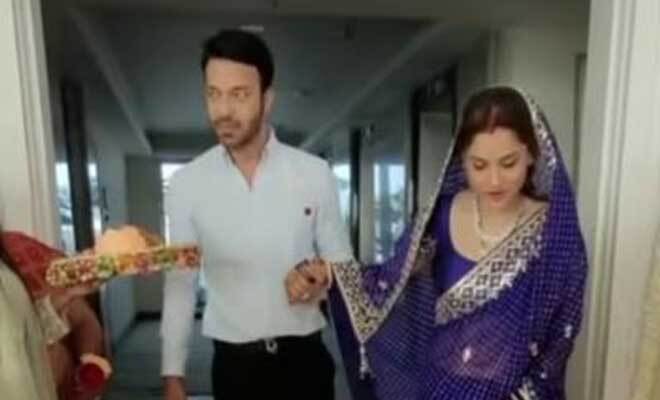 People often say that when a person gets married, a new chapter in their life starts and I agree. Especially for a woman, this statement is true. Of course, she doesn’t leave behind her old life, but she does leave behind a lot of familiarity and comfort – including her house, her room, her parents, etc. – to start a new chapter. And trust me the transition is not as simple as it seems. But if you have the right partner, then most definitely the process becomes much easier. I mean, look at Ankita Lokhande who recently posted a video of her grahpravesh with Vicky Jain, and looking at the smiles on the couple’s face, it is clear that for her the transition to a new family, new life, new home, etc. is going to be smooth and beautiful.

Ankita Lokhande who tied the knot with her beau Vicky Jain on December 14th, 2021, recently took to her Instagram to share a video of her grahpravesh. The video showed the newly-wed couple entering their home and performing all the rituals.

Ankita Lokhande posts a video of her grahpravesh and writes, “New beginning’s with Mr.Jain and family❤️ @jainvick #anvikikahani #grahpravesh🏠” In the video, the actress can be seen wearing a blue saree and dipping her hand in yellow-tinted water and then pressing those hands on the entrance of her door; Vicky Jain follows the same process after her. And the music in the background really had us melting in a puddle!

Today, December 20th marks 19 years of Rani Mukerji and Vivek Oberoi’s film Saathiya and the Pavitra Rishta actress paid tribute to the movie in her own way. Ankita Lokhane added A. R. Rahman’s song Mangalayam from Saathiya in the background.

And then as per Hindu rituals, the women welcome Ankita Lokhande with aarti, after which she enters the house with tinted yellow feet. The couple then takes the blessings of the elders around for a healthy, long-lasting marriage.

Watching Ankita Lokhande perform the grahpravesh rituals makes me realise that no matter where we go and who we become, we Indians will always be rooted in our culture and traditions. And just that thought is enough to make me smile.