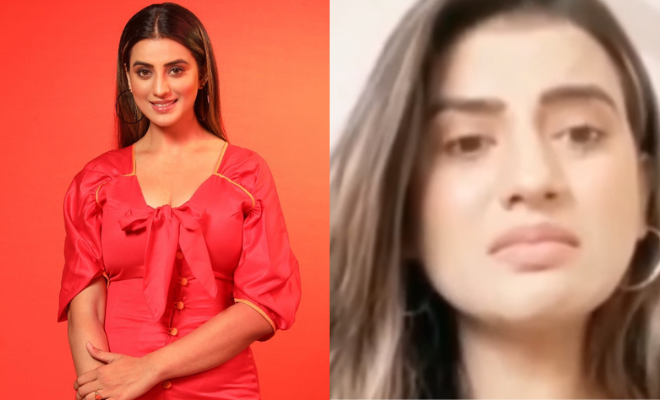 It is nothing new that whenever there is any leaked photos/videos/MMS’ of actresses or women in the public eye, it creates a scandal. Look at how much drama Kim Kardashian and her sex tape still causes, after all these years! Most recently, ‘Kacha Badam’ girl Anjali Arora was in the limelight for some leaked footage and MMS. And now we have Bhijpure actress Akshara Singh whose MMS has seemingly gotten leaked.

The girl in the video is shown in a compromising situation with a man. Fans are finding it difficult to decide whether the girl in the video is actually Akshara or if she has been edited into the video. The girl’s name and the authenticity of the MMS video have not yet been confirmed. While reacting to the scandal, Akshara sobbed and questioned why the Bhojpuri industry was so “cheap.” She further added that no other film industry has such scandals happening as the Bhojpuri one.

Also Read: In Beirut, Woman Forced To Rob A Bank With Toy Pistol So She Could Pay For Sister’s Cancer Treatment

Anjali Arora was recently in the news when her purported MMS went viral on social media and was ridiculed by internet users. Anjali stated in an interview that she did not pay much heed to the troll and negative remarks made about her professional endeavours but instead took them as feedback. She said that they have every right to like or dislike you and one needs to be tough enough to take the criticism in their stride.

Dearest Readers, The Incomparable Cast Of ‘Bridgerton’ Has Officially Begun Filming For Season 3. But Where Is Kate Sharma?