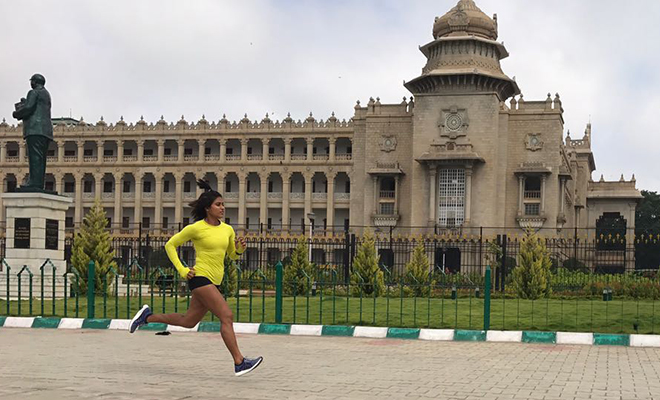 Remember when we tried and tested the adidas Ultra Boost X? Back once again, adidas’s all-new UBX Mystery Ink shoes launched in the market in the coolest way possible!

Ten women runners took on the #GreaterEveryRun challenge, with adidas’ latest campaign. Starting off in Mumbai, the runners did a relay run across cities such as Bengaluru, Hyderabad, and Delhi, eventually coming back to Mumbai for the final launch. And the surprise element: the baton was the UBX Midnight Ink shoes.

Passed on from one strong woman to another, they either ran alone, or were paired up with each other to enjoy the UBX quest and discover a little more about themselves.

Besides the launch, the new UBX Mystery Ink kicks were also used by most of the runners to train for the upcoming IDBI Federal Mumbai Half Marathon on the August 20, 2017.

Check out the fun journey these kickass young women embarked upon, inspiring each other break barriers and stretch their limits.

Follow them as they take on the challenge to get #GreaterEveryRun.

Kickstarting this cross-country relay with the new UBX was Fit Girl India Ayesha Billimoria in Mumbai. Inspiration and positivity are two of the main things Ayesha took back, especially when sharing this journey with her running partner and the next contender.

Fitness can be an issue for many, especially when you’re stuck in a busy city with a hectic schedule — however Ayesha does believe that until and unless you motivate yourself and acquire the company of people who encourage and motivate you even more, the lazy factor will keep creeping into your lifestyle.

Running in her home city, a city where she discovered her inner athlete, thus strengthening her physical and emotional well-being, Ayesha revisited all the spots that brought her where she is today.

Her principles of “strength in mind, strength in body, strength in character” are a true reflection of this, isn’t it? The shoe exchange run was meant to involve people from various aspects of life, who share one love, and that was for fitness.

With this she was extremely happy to pass on the legacy on to Swetha Dev, the next contender.

Next in line to try out the shoes was Swetha Dev, who ran on the streets of Bangalore in the adidas pair. The one thing SweatySwetha, as she is known as on Instagram, loved about adidas’s all-new launch? The colour, of course!

Letting her followers know that it’s always mind over matter, and to be positive in both actions and thoughts, Swetha pushed herself to be stronger and reach her personal best. A person with borderline ADD, Swetha says, “Running calms me down. It is my meditation.”

Running has created a space for discipline in Swetha’s life and has had a positive effect on her health as well. Sharing the same principles as Ayesha, the two of them excitedly took the streets of Mumbai by storm — they let loose and had some fun with the shoes that had become a part of their lives.

Heading back to Mumbai, the shoes were gleefully given to India’s first female National Racing Champion, Alisha Abdullah.

Alisha was never really a runner and only actually started running after her association with adidas. “I honestly don’t run much, but whenever I do run, I don’t feel like I am running actually,” she confessed.

The shoe exchange challenge was absolutely fun for her, as she got to meet new people, and found out a lot about their life, as well as running.

A city girl at heart, the UBX shoes are apt for runners in urban, concrete jungles, much like herself.

Super excited to try them on, Alisha Abdullah couldn’t contain her enthusiasm! Besides the shoes being super lightweight, its unique style is what she was drawn to. Feeling that the power comes from beneath, these running shoes precisely give you that feeling of ‘power’!

Continuing its journey in Mumbai, the pair then headed to actress Pooja Gor.

Testing out the UBX Mystery Ink shoes in her favourite running spots in Mumbai, Pooja Gor took on the swap challenge and totally loved it!

Pooja’s relationship with fitness started 3 years ago, and she thanks adidas Runners India for motivating her towards it. “Wanting to be healthy and fit was my goal, but joining an activity or going to the gym and being consistent was a challenge because of my working hours.

“Eventually a friend introduced me to running, which I always thought was an activity for professional athletes. But I gave it a try.”

Today, this actress doesn’t stay fit just because she’s in an industry that requires that of her, but she does so as it’s become an integral part of her life and mental well-being.

Pooja is currently training for her second half-marathon and, just like Swetha, she’s always believed in mind over matter, and encourages others to follow this belief as well.

Running alongside previous contender Alisha, the 2 conquered the busy streets of Mumbai with their UBX Mystery Ink shoes — confidently and comfortably.

Moving back to Bangalore, these shoes were given a great workout by athletes Vandana Pramod and Varsha Rohit at Cubbon Park. Cubbon Park is a space in the city where many locals come to be fitter, healthier, and happier. And Vandana and Varsha were no different.

As a matter of fact, Varsha even ended up setting her personal best! Training for the Olympics, fitness and running flows through Varsha’s blood, and yes, she does take it very seriously.

For this duo, it didn’t stop with Bangalore – the shoes were also taken across to Hyderabad, where they were used to run at Banjara Hills, the most iconic spot in the city of Nawabs.

Running on the beach is a wildly liberating feeling — the sound of the waves crashing, the sand under your feet, and the wind in your hair. So naturally, model Sony Singh and entrepreneur Reeti Sahai were thrilled to be doing this in Mumbai.

A morning run on Juhu Beach in Mumbai was the perfect way to start the day, as well take on the UBX challenge.

“Fitness is great for the mind! An early morning run can really make your day and I believe everyone should start it with a run to boost energy levels and clear your mind,” said Sony.

“Meeting someone outside the fashion world who is so much into running was inspiring,” she added.

After running together on the beaches of Mumbai, the duo headed back to Delhi and ran to the backdrop of India Gate!

Imagine how thrilling it must’ve been for the two to encourage and push each other during this challenge! “Running with Reeti was really exciting as I am more into yoga and can only do about 7 kms. But running with her was an amazing experience as I got to learn a lot,” Sony added.

Reeti, Founder of Toni & Guy, definitely finds it difficult to fit a fitness regime into her daily busy life. However, running is one of the passions she cannot ignore. Making sure she takes out time in her week to attend to her love, she believes that it is the most exhilarating way to de-stress and create your own happy space to be in.

From the sock-like fit to the bounce; from the floating arch to the continental sole; to even the colour – there was nothing that Reeti didn’t love about the shoes. “Loving and living in them,” is what she stated!

Moving back to Mumbai, Freishia was the next in line to give these shoes a go, and she was left as impressed as the others. TV Anchor Freishia B was not a runner. However, she starting training indoors, and then the first 10-km run came her way — she was up for the challenge!

“Running is a very solo experience, as most of the runners run alone across the globe. However, training for the marathon with a bunch of amazing girls was quite the experience,” she describes.

Training in the very same UBX Mystery Ink shoes, Freishia knew she was indeed getting “Greater Every Run”, and it pushed her even further to take on the challenge. This exciting journey of going from a non-runner to someone who will now run her first 10-km is a story in itself that shows you — if you set your mind to something, achieving it becomes your only goal!

Taking over the shoes, model Dayana ran alongside Freishia to commence the launch journey in Mumbai. Running through the scenic Sanjay Gandhi National Park, these running partners explored the Borivali Kanheri Caves too!

Hailing from Coorg, Karnataka, Dayana saw a side of this vast and beautiful city that she may not have otherwise.

Dayana even went on to say that “the run is more important than the race”, implying that it’s important to take in your surroundings and learn a little with every step you run.

After all, in life, the journey is always more beautiful than the destination, isn’t it?

From Mumbai, to Bangalore, to Delhi, to Hyderabad – the journey wasn’t just about the shoe. It was about how women from different walks of life were inspired to break norms, routines, and get themselves to be motivated enough to get fit and greater with every run!

Inspiring people to get into fitness and run a greater run each time, adidas Runners India encourages you to push forward, be yourself, and go for the gold!

And what can be a better running partner than adidas’s new UBX shoes, right? #GreaterEveryRun

* This is a dedicated post in collaboration with adidas.