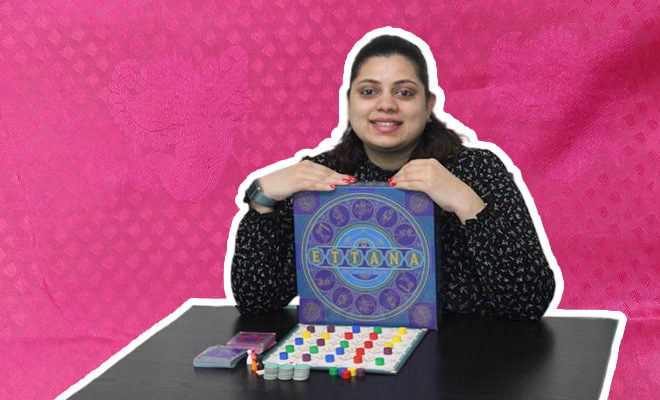 Saturday night is mostly game night in my house. We have a stack of board games that we have collected over years and now spend hours playing (read fighting) with some snacks and drinks on the side. At the risk of sounding a complete nerd, I would like to confess that I am a sucker for games that forces the players to either use their brains or educates them about something. I loved those trivia board games, and I am not even sorry. Looking back at the pile still sitting in my cupboard waiting to be unfolded on the weekend, I am realising not one of them is Indian apart from Ludo and chess of course and not a single one that teaches about Indian history. No wait, it could be fun too. It doesn’t really have to be about history wars and weapons, but something interesting and exciting like Indian textile. Case in point, this board game that tells the history of kanjivaram silk sarees.

The world of fashion is so vast and take it from someone who writes about it everyday, one can never learn enough about it. Weaving the stories of the lost and dying textiles and crafts of India like Kancheepuram silk in a board game is a brilliant way to put the handloom on the map. This was exactly on the mind of Madhu Sundar, a game enthusiast and saree lover who created Ettana, the looms of Kanchi. She is the founder of Mad4Fun Games and came up with the concept to introduce Tamil Nadu’s Kancheepuram village along with its textile, temples and trajectory. Sundar told TNM, “I wanted to conceptualise the things that I like. I have an interest in Kancheepuram sarees and I also like board games. I merged everything I liked into this game —weavers, weaving, game strategy, etc.”

Also Read: Dia Mirza, Anushka Sharma And Deepika Padukone Wore Classic Red Banarasi Silk Sarees. We Talk About Why This Is A Favourite

Madhu who is from Bengaluru but is residing in Zurich Switzerland realised that not a lot of her friends have been to Tamil Nadu and the town of Kancheepurama and its craft and culture is still untouched on so many levels. She seeks to put it on the world map through this game. She said, “You don’t see a lot of people overseas picking up a Kancheepuram silk dupatta in bright candy-floss pink colour but they do pick up a Kashmiri shawl. We are trying to take a local craft, put it through a series of colour and design etiquette changes and see how western audience look at it,”

She reached out to designer Darshini Sundar who also shares the same love for textile prints as Madhu and helped with the design aesthetics and game strategy. Darshini said, “Designing it was quite simple. It was easy to replicate the jacquard looms. Action cards with 12 different actions like move, swap, replace, etc., were based on Bharatanatyam mudras and temple sculptures. Every design inspiration was already available in Kancheepuram. I just had to recreate it for the game.” It took six months to develop the game and will be released worldwide in May. You can pre-order though.

The game can be played by 4 players above 8 years of age and consists of a board with 5×5 octagons, design cards, action cards, coin tokens, coloured pegs that represent yarns of differnt colours and numbered tiles. The player who earns 8 anna points is the winner. The name ‘Ettana’ means 8 anna (anna is the currency used in British India). The official Instagram page of Mad4Fun Games shared a picture of Kanjivaram look and wrote, “Ettana also revolves around the similar concept wherein the players should replicate the logic of the design from the design cards onto the board by strategically moving and performing various actions.”

We have all grown up watching the women in our family wearing the shiny silk sarees in weddings and special occasions but we hardly know about the origin, history and why each looks different. There are more than 25 types of silk sarees produced across India and each has its own unique feel, appeal and look. This board game covers the tale of one of the most popular silk, Kancheepuram in a fun way. Learning about textiles while beating your cousins’ ass in a game about fashion, yeah I know what my next addition to the board game pile is going to be.