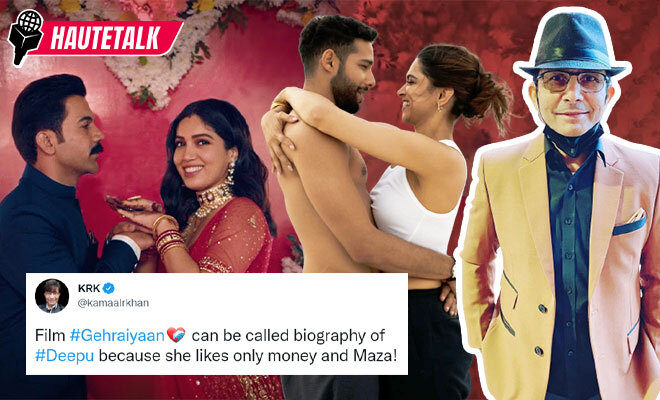 Hautetalk: KRK Has “Opinions” On ‘Gehraiyaan’, ‘Badhaai Do’. Why TF Is This Man Still Relevant?!

Does anyone remember KRK? After Kangana Ranaut entered the scene with her onslaught of problematic and unsolicited opinions, she managed to distract me enough to forget about KRK and HIS onslaught of problematic and unsolicited opinions. Out of sight, out of mind, right?  Regardless of what your opinion is on Gehraiyaan as a movie, let’s be fair that a lot of unsolicited and honestly disgusting comments have been made by many about the much-anticipated movie. Especially the female cast. For example, the entire feud between Deepika Padukone and Freddy Birdy because the latter couldn’t keep their mouth shut about a woman’s choice of clothing. Another man has decided to put his unsolicited opinion on social media because why not? Kamaal R Khan who is infamously known as KRK, is known for his very concerning opinions has gone one to Twitter and thrashed Gehraiyaan and Deepika Padukone in the grossest and most unprofessional way possible. Not only that, but he also posted his opinion regarding the trailer of Badhaai Do and to say that his opinions have appalled me would be an understatement.

Film #Gehraiyaan can be called biography of #Deepu because she likes only money and Maza!

I genuinely believe that KRK walked so Kangana could run. Can we just talk about his disgusting Tweets directed towards Deepika and Karan Johar are? I don’t understand why KRK feels that he has any right to comment on a woman’s sexuality and how she chooses to express it. Moreover, why do you care if she is sexually active? And are you jealous of the fact that she is a successful woman who isn’t afraid to do bold roles in the face of men like yourself, KRK?

Now, let’s discuss the way he referred to Siddhant Chaturvedi as a “Jhuggi actor.” Now if you are like me and didn’t know what jhuggi means, let me tell you about my newfound knowledge. Jhuggi essentially is a slang term for people who live in slums. Now you see why this is problematic? Like, what a way to reduce a person’s achievements down to something as materialistic as this.

What a great dialogues in this film #Gehraiyaan ! The best dialogues I ever heard in any film. Karan Aur Sharam Ka koi Lena Dena Nahi.

Also this. What version or era of India are you living in, KRK? If you weren’t aware many people are sexually active before marriage. And there is honestly nothing wrong with being in touch with your sexuality. Could you at least try to read up about sex and sexuality? Moreover, KRK, I am certain you have google, please educate yourself.

Some ppl are asking me after watching my trailer review of #BadhaiDo, whether Am against LGBT community. I say, not at all. But at the same time I don’t want to watch 10 films & 20 web series on LGBT subject in a year! So many films & web series on the same subject are overdose.

Now I believe this one deserves a separate rant but I will TRY to summarise my thoughts on this. He has just dismissed Badhaai Do based on the fact that it represents the LGBTQ+. Firstly, for decades, people from the LGBTQ+ community have had no representation. There was almost nothing in pop culture and media that the people from the community could relate to. Because of this, a lot of them grew up believing that there is something ‘wrong’ with them. In a recent interview with Hauterrfly, Badhaai Do queer script consultant Manish Gaekwad very intelligently said, “The Rigveda says: Vikriti evam prakriti. What looks unnatural is also natural.” So, suck it up!

Also, which “10 films & 20 web series” about the LGBTQ+ community is KRK talking about? While there definitely is more openness about the community now, we definitely do not have nearly enough representation. Especially as compared to cis-het people. Also, don’t want the movie if it bothers you that much if you aren’t going to bother educating yourself and are gonna make ignorant comments like this one.

Kangana Ranaut Revealed She Didn’t Make Enough Money To Pay Her Taxes. Is This A Subtle Boycott By The Industry?