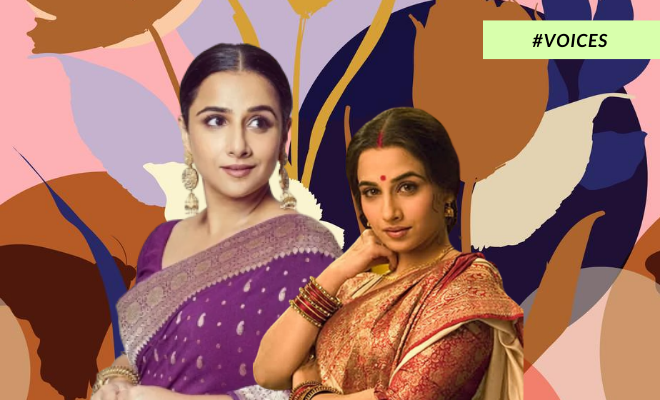 #Voices: Vidya Balan Said When She Was Replaced In Many South Indian Films, She Thought Her Career Was Over. But She Never Gave Up

Getting into the showbiz and making a mark in the industry isn’t cakewalk, especially if you have no connections or “godfathers” to present you with brand new opportunities. This is very much clear now that the outsiders are finally speaking up about the horrors of the unfair business that goes down in the industry ever since Sushant Singh Rajput took his own life.

Although he didn’t leave a note and nobody is entirely sure about why he did what he did, the unfortunate incident re-ignited the raging debate on nepotism which still hasn’t settled. People are digging up old stories and are pointing fingers at Bollywood biggies accusing them of not giving real talent a fair chance. And then there are some who have made it their life’s mission to unveil the dark side of the film fraternity.

Nepotism is not a new thing and happens in almost every field, not just films. However, outsiders do have a hard time sustaining in the film industry and getting the chance to show their talent while the star kids just waltz in with their connections and take up their roles. They are often replaced or are turned down, sometimes they aren’t even told the reason. Ayesha Jhulka talked about being replaced in Narsimha earlier this week. Of the handful outsiders who do get a chance, one flop film could mean that their career comes to a standstill.

One of the actors who managed to make her mark and is now a major success in the film industry, despite facing the brunt of nepotism for many years, is Vidya Balan. Now we all know what a brilliant actor she is, but that might not have even happened if she had given up after getting replaced from South Indian films for straight three years. Yes, that happened!

Before landing her first role in Parineeta, Vidya Balan struggled for years to get a break in the films, only to be replaced or get turned down by the South Indian film industry. Talking about her experience, she said in a recent interview, “Ups and downs are part of life, they don’t happen only when you’re struggling for your first break, even after becoming an actor, I’ve been through very deep lows. Siddharth, I just talk to him about whatever I’m going through.”

She said that after getting so many rejections, she thought that her dream of becoming an actor was over but she never gave up. “Sometimes you don’t even need anyone to tell you something, you just want to share what you’re going through. So I think, various, various ups and downs. Maybe before I got Parineeta, there was a period of about three years when I got replaced in a dozen South films and nothing I did seemed to be working. I thought maybe my dream of becoming an actor will remain an unrealised one. So that was probably a really low ‘low’. The lowest low!”

Also Read: Sushmita Sen Talks About How She Survived Nepotism In The Industry, And We Love Her Optimism

She has also faced discouraging comments from her colleagues many times when she started working. “Not anymore but I remember in my early days, I would get hurt by comments from people who I thought were my friends. You know sometimes they’ll say things to put you down and I never understood that. Then I realised they weren’t my friends, they were people I was working with. That realisation comes from experience and maturity. I’ve enjoyed working with a lot of those people but they are not friends,” she said. As they say, there’s no such thing as friendship in the movie business.

When asked about the whole nepotism debate going on in the country after Sushant’s demise, Vidya said, “With Sushant Singh Rajput passing away, people who felt wronged, ignored, there was a sense of identification with him. Now the point is rightly or wrongly we do not know because we do not know why he took the step he did. To show respect is to keep quiet. To speculate is… people can come up with all sorts of theories and that’s unfair to him more than anyone else, and his loved ones, who’re probably grieving.”

She added, “I’ve been through ups and downs and I’ve had all sorts of experiences in the industry. I am not saying nepotism does not exist, but I didn’t let that stand in my way. That said, everyone is different. It’s a tumultuous time and it really helps to talk to someone. But no one can be blamed if someone decides to take their own life. Let him really rest in peace.” And, we agree.

It is clear that it isn’t easy for anyone to thrive in the competitive and connection-oriented business that the film fraternity is. It is even harder for people who are considered outsiders. The only way to survive and flourish in this industry is by believing in yourself and not giving up. Vidya did it, and look where she is now.

Also Read: As The Bhatt Clan Comes Under The Nepotism Scanner, Pooja Bhatt Argues That They’ve Launched More Outsiders Than Anyone In The Industry