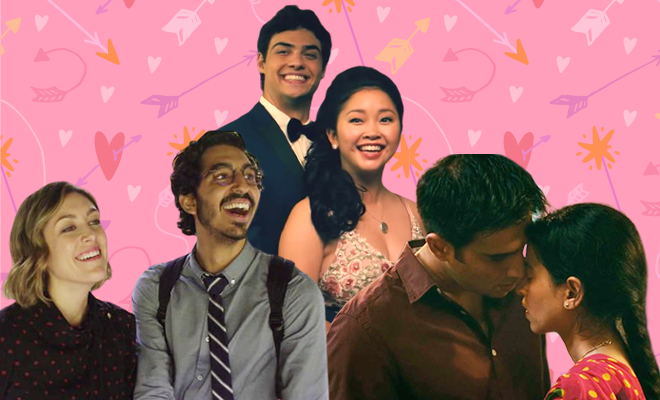 If you’ve got a date this Valentine’s Day, after the disastrous year full of all kinds of distancing we’ve had, congratulations. Me, I’ve already accepted that mera boyfriend toh Netflix hai. And I will be celebrating February 14th pushing its buttons, and some candlelight, wine and pizza for one. What’s more, I’ve already made a list of movies and shows I plan to watch, and it is longer than usual because it’s a proper Valentine’s weekend, y’all! But even single, I am not bitter, and okay fine! I will share my list with you so you too can cuddle up, either alone or with BAE, and have a romantic, mushy, Valentine’s Day.

Yep, I’m all about that dramatic/poetic flair. And so I’ve made a list of 21 titles for V-Day ’21! And this list has got something for everyone. Love historical romances? Check! K Drama your drug? I gotchu, sis. Still not over Madhavan from RHTDM? Tell you what, I’ve something for you too. Since everyone’s already gotten their DDLJ, When Harry Met Sally and Notting Hill list of classics sorted, we’re going to keep the list fresh and fun!

So gather your munchies, put that vino to chill and get your mood lighting ideas sorted. Don’t worry about the atmosphere because this list will set it up for ya!

Movies To Watch On Valentine’s Day

To All The Boys: Always And Forever (Netflix)

It’s the third and final film in the To All The Boys franchise and you cannot miss finding out if Lara Jean and Peter Kavinsky are endgame or not! Psst! The movie has a pretty fun soundtrack. Lana Condor and Noah Centineo are adorable as ever. And let’s not forget Peter is major #BoyfriendGoals!

This 2020 film is finally dropping on a streaming platform on Valentine’s Day. Starring Jaden Smith, Cara Delevingne, Cuba Gooding Jr., and Nia Long, the film is about a 17-year-old boy who finds out that his girlfriend is suffering from cancer. It’s in all probability, going to make you emotional AF, but then, sappy love is a fetish too, no? What’s more, Jaden Smith’s parents, Will Smith and Jada Pinkett Smith are executive producers on this one.

Tillotama Shome and Vivek Gomber star in Rohena Gera’s understated, beautiful film about love that blossoms amidst class divide between a man and his house help. It’s a nice introspective film to watch on Valentine’s Day and wonder if love really is enough?

The sci-fi fantasy romance film, based on American author Lev Grossman’s short story of the same name, stars Katheryn Newton and Kyle Allen as two adolescents who are stuck in an infinite time loop. They’re the only two people aware of this temporal anomaly, and decide to collect perfect heartwarming moments around town, in the hopes that it reveals to them some profound truth about the universe, which helps them break the Groundhog Day spell.

I mean, I’m excited! It drops on Amazon Prime Video on February 12, just in time for Valentine’s Day!

The Half Of It (Netflix)

This Alice Wu film is easily one of my most favourite teen romances to come out in the past few years. The Half Of It is a coming-of-age drama where a friendless Ellie Chu makes extra money writing papers for her  classmates. She gets approached by Paul Munsky to write love letters that he can send to fellow student Aster Flores. Only, even Chu has a crush on her, which means this gets complicated!

Sylvie’s Love, starring Tessa Thompson (Valkyrie from MCU) and Nnamdi Asomugha, is this sweet, simple film with no agenda than to just tells a love story. It’s that old fashioned movie love that we’ve seen plenty of times on screen. And yet, this one manages to move you and keep you hooked, feel for the characters, and in the end, make you ache for a love like that. Bonus, we don’t get that many Black love stories so this one’s perfect for Valentine’s Day.

Okay, so Uncle Frank is more of a comedy drama than a romance, but hear me out. Paul Bettany (aka Vision from MCU) plays the titular Uncle Frank, a gay professor in 1970s New York, living secretly with his boyfriend, Wally. His niece, Beth, who is studying at NYU, suddenly drops in on them one day, and figures out the real reason her Uncle Frank was always aloof from the family, especially her grandfather. But just as she’s coming to terms with this, a tragedy forces Beth, Frank and Wally to travel to South Carolina, where Frank is still not welcome like he was all those years ago when he ran away. Or so it would seem.

Uncle Frank is a light film about the changing modern family dynamic and the acceptance of love is love, which is really the perfect message to spread on Valentine’s Day.

Okay, watch this film on Valentine’s Day at your own risk, because this is not a love story! It’s a story about love and a messed up relationship between two messed up people. Shot entirely in black and white, the film has spectacular performances by Zendaya and John David Washington, and show us how terribly the people who love us can hurt us with mere words and gestures.

Maara is a love story alright, but surprisingly, it is actually not a love story about the people you think! R. Madhavan and Shraddha Srinath star in this Tamil remake of the Malayalam film, Charlie, which starred Dulquer Salmaan and Parvathy Thiruvothu. Maara is beautifully shot as well!

Shows To Watch On Valentine’s Day

I mean, come on! Period romances, especially something as tantalising as Bridgerton and starring an entire cast of hotties like Phoebe Dynevor, Rége-Jean Page and Jonathan Bailey, are always delicious! But Bridgerton is basically Pride & Prejudice meets Gossip Girl, and it even has a secret gossipmonger, voiced by none other than Dame Julie Andrews!

Bridgerton has oodles of romance and lots of love stories. And the sex scenes are pure fire. Here’s a proof that might just spark a burning desire in you to watch the show on Valentine’s Day if you haven’t already!

Bandish Bandits is, hands down, one of the best shows to come out in 2020. I don’t think there’s anything about this show that you can’t love—it is a love story at heart. The cast includes veterans like Naseeruddin Shah, Rajesh Tailang, Atul Kulkarni and Sheeba Chaddha, The chemistry between its lead pair Ritwik Bhowmik and Shreya Chaudhry is hot and fresh. And since it is a show about musicians, the songs by Shankar-Ehsaan-Loy is pure magic.

Feast your eyes, ears, heart and soul on this beautiful song and feel it all!

Hello there, Korean Drama fan, you think I’d let you go back khaali haath? Now imagine, wouldn’t it be amazing if there were two boys who were head-over-heels in love for you? I toh can’t relate! But in Boys Over Flowers, a working-class girl struggling financially has to tackle romantic troubles too when she gets tangled up in the lives of a group of wealthy young men in her high school. Now this is a 2009 show, but India is only now catching up to the K Drama craze so how about you stop smelling the flowers and binge these 25 episodes right away?

Emily In Paris is a Golden Globe nominee now. Yep. But who cares about awards when our reward is Lucas Bravo’s beautiful blue eyes? Lilly Collins’ Emily and Lucas Bravos’ Gabriel have fiery chemistry and if you’re not watching them try to keep their hands off each other (because forbidden fruit!), then what are you even doing?

Here, watch this montage of Emily + Gab moments to get you warmed up for Valentine’s Day.

Also Read: Emily In Paris Was A Battle Of Escapism vs Realism In My Head. Escapism Won And Je Ne Regrette Rien!

Crash Landing On You (Netflix)

The ‘Paris Hilton’ of South Korea has a freak paragliding accident and finds herself in North Korea, crash landing in the life of an army officer, who is going to help her hide. I mean, that’s a meet-cute! Crash Landing On You is how a lot of people began their obsession with K Dramas, so if you’re planning to start, just grab BAE and press ‘play’!

Rishi and Dimple’s cute love story works for you in every situation. How? See, if you’re planning to make things serious, then Rishi’s old-school views on love and marriage might be just the thing you need to hear. And if you’re planning to keep it casual, Dimple’s coffee cup splash on Rishi’s face will serve as a nice reminder to not address each other as ‘future wife’ or ‘future husband’.

A Discovery of Witches (SonyLIV)

I promised you historical romances and A Discovery of Witches combines that with fantasy and a tale of star-crossed lovers. Based on Deborah Harkness’ All Souls Trilogy book series, the show is currently airing its second season, and it has everything. Vampires, witches, demons, magic, and time travel, through which our lead pair of Diana Bishop and Matthew de Claremont go back in time and deal with some real historical figures and settings. At the heart of it all though, it is a love story, where love causes an almost alchemical transformation in the two characters.

Bonus: Take my word for it, anything that stars Matthew Goode, especially as a bad-boy-turned-good boy vampire, has to be, as his name indicates, GOOD.

Did you know that Modern Love, which is an anthology of modern relationships, is actually based off a weekly column by the same name in The New York Times? This is one beautiful, beautiful limited series that will make you emotional, show you different shades of love, and make you wish there were more seasons! A perfect Valentine’s Day watch!

Netflix has figured out that Indians, whether desi or NRI, are obsessed with shaadi. And so after the success of Indian Matchmaking, we’ve now got The Big Day. It actually looks decent in the trailer, which showcases twelve couples getting ready for the most special day in their lives. These are extravagant weddings that fuel the multi-billion dollar wedding industry in India, but the show promises to offer a look at some unique modern weddings too. If you and BAE are planning to tie the knot, or you just want some casual reality TV binge, this is your show!

Also Read: ‘The Big Day’ Trailer: Do You Take This Netflix Show, In Binge And In Cringe, As Your Next Watch? I Do.

I know Vision is dead as of Avengers: Infinity War and Wanda could possibly be a villain in this show. But I will fight anyone who denies that WandaVision is essentially, at least in Season 1, a tragic love story. Elisabeth Olsen and Paul Bettany are adorable as a couple going through different eras of sitcoms! Watch it for their chemistry, and stay for the explosive Marvel theories and cameos!

At what age does it become inappropriate to be a fangirl? I say age no bar! But in Her Private Life, a museum curator in her late 20s is huge fangirl, even managing a fansite dedicated to the object of her affection. However, when rumours begin that she is dating him, she needs to seek protection from other crazy fangirls. On the suggestion of her colleague, they both pretend to be a couple to ward of rumours. But the pretending can get real when you’ve to do it all the time, especially when you’re so closely watched… Her Private Life is a sweet romantic-comedy that you should definitely binge on Valentine’s Day!

So there you go! If my list managed to salvage you from boring Valentine’s Day plans, then you’re welcome!

On Valentine’s Day, We Don’t Wear Red! Here Are 5 Outfits That Are Cool And Sexy, But Not The Standard Red