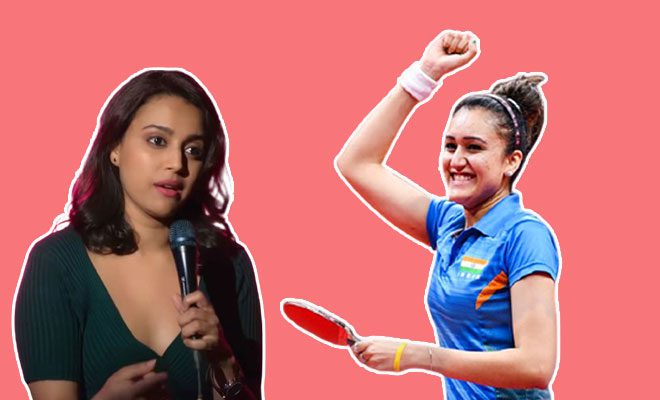 The only thing that could work as a silver lining to the grey cloud that is the Olympics happening in empty stadiums is the wins and glory that your athletes would be bringing home. For India, it was Mirabai Chanu bringing home a silver media in weightlifting that opened the account. Pretty soon, tennis champ (world rank 62) Manika Batra won her match against Margaryta Pesotska (world rank 32) tp reach the third round in women’s singles at the Tokyo Olympics. And though her next against Austria’s Sofia Polcanova sent her packing, some Indians on social media found a different way of talking about her as their hero. And it wasn’t exactly a savoury one, because it involved comparing Manika Batra and Mirabai Chanu, athletes, to Bollywood actresses, to diss the latter in the name of real feminism and beauty.

There were these posts and tweets doing the rounds, which named and shamed actresses like Swara Bhasker, Sonam Kapoor and Taapsee Pannu for being ‘fake’ faces of beauty, women empowerment and feminism. And instead, suggested Mirabai Chanu and Manika Batra as worthy role models.

The posts were called out by many, including Swara Bhasker, who found her own way to point out just how ridiculous this whole comparison was.

😬😬🤓🤓 Many congratulations to #ManikaBatra and every other female achiever in any field!!! 💖✨ https://t.co/RZLqhjIM7f

When I came across these posts, I was reflexively angry. And then as the anger cooled down, I couldn’t help but snort at the stupidity of this laughable argument. Pehle toh, thanks to all the men who tried to mansplain us women what empowerment and feminism is. Thanks haan, geniuses. And second, in what universe does an argument about feminism involve putting down one section of women to uphold another? Female athletes are achieving glory through their sport, while Bollywood actresses are picking nuanced characters and doing progressively real films about flawed women to hold up a mirror to society’s changes and how it needs to change. Just because one of them is palatable to your sexist sensibilities and the other challenges all the years of patriarchal supremacy you’ve ingested, doesn’t mean one is better than the other.

And third, please STFU and keep your misogynistic ideas on women empowerment to yourself. You’re lowering the IQ of the entire country.

Also Read: What Are Things That Feel Like Feminism But Actually Aren’t? Twitter Thread Proves We’ve A Lot Of Unlearning To Do

A year ago, I wrote an article about toxic femininity, which prohibits women-led workplaces from functioning to the best of their abilities. While researching, I read studies that explained the reason for it. This male-dominated world puts out very few positions of power and respect for women to occupy. And by doing so, it inadvertently creates a competitive environment, pitting women against each other to grab these limited seats of power. The result? Toxic femininity which involves women putting other women down to eliminate competition. But what’s perhaps an even lower level of disgrace is when men have the audacity to use feminism, a movement that strives for substantive equality, to place women they approve of on a pedestal while pulling other women down via unfair comparison.

Trolls are going to troll, and haters are going to hate. But we need these ridiculous comparisons to stop. Because you sitting on your computer sharing these memes is not doing much to uplift this country as a Ratan Tata is. And if you think that comparison is stupid, well, now you know how women feel about your ‘real feminism’ argument.

Kajol Says “We’re Regressing. People In The 50s And 60s Were Not Judged So Much.” She’s So Right!