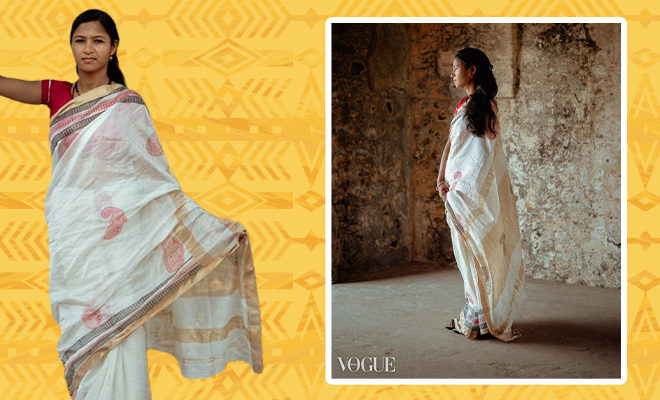 Getting recognition for your work and getting featured on a global platform is what everyone dreams of but it’s an opportunity only a few get. These tribal women from a self-help group in Dhar, Madhya Pradesh would not have imagined that the sarees they were designing and posing in for putting them out in the market simply to sustain themselves would catch the eyes of a premium fashion magazine. That is why when the 25 year-old Sita Vasuniya was asked how she felt about being featured in Vogue Italia, she said, “When I started training in February, I had never dreamt of being featured even in a local newspaper forget about figuring in a premier fashion magazine. I still can’t believe it.”

She is among 10 tribal women from Dhara district of Madhya Pradesh who are a part of a SHG created under the Atmanirbhar Bharat scheme. These women design and make handloom sarees like many other small groups as a medium to make ends meet and keep the Indian art alive. They also model for the catalogue themselves which is how Sita ended up in the Italian edition of the fashion magazine. She posed in a Maheshwar Handloom saree, block printed by her, against the backdrop of Dhar’s scenic historic monument. The picture caught the attention of Vogue Italia which featured her photo in her own handprinted saree in their digital edition. This is a pretty big feat since it puts Indian textile on the map and the work of these talented women gets global recognition.

Also Read: This Red Dress Has Travelled For A Decade And Features Embroideries By Female Artisans From 28 Countries, Including India.

Currently, there are three groups operating in Madhya Pradesh, Dhar being one of them and a total of 30 tribal women and girls are indulged in different handloom work. While the other two specialise in fabric printing, women in Dhar SHG are trained in Dabu, Batik, block-printing, hand painting, and thread work. According to the ADM-Dhar, “All the girls and women of all three groups were trained in fabric printing art first. Then experts and designers from reputed academic institutions, including Shri Ram College of Commerce (SRCC), National Institute of Fashion Technology (NIFT), and National Institute of Design (NID) were roped in to study and experiment with newer designs to penetrate more into the global market. Subsequently Lookbook was developed to showcase the sarees printed by all three groups.”

The lookbook is a catalogue of their work which showcases the photos of sarees made by these women. Apart from the craft, these women are also trained to model their sarees and pose for the lookbook. The picture of Sita featured in Vogue Italia was meant for the lookbook but ended up in one of the most prestigious fashion media in the world.

“The results of our experimentation is for all to see, Sita featuring in her own block printed handloom saree on the Vogue Italia digital edition is just the beginning. While homegrown fashion/designer labels from Jaipur, Delhi, Mumbai, Bengaluru, Pune and Bhopal have already started booking orders with the three groups, Sita’s picture in the premier fashion magazine has resulted in a series of more calls. We’re confident that in the coming months, not only Sita, but the other young girls and women will turn self-dependent and earn livelihood on their own with their creative splendours,” the ADM-Dhar said.

Also Read: Woman Designs A Board Game About Kancheepuram Sarees To Put The Handloom On The World Map