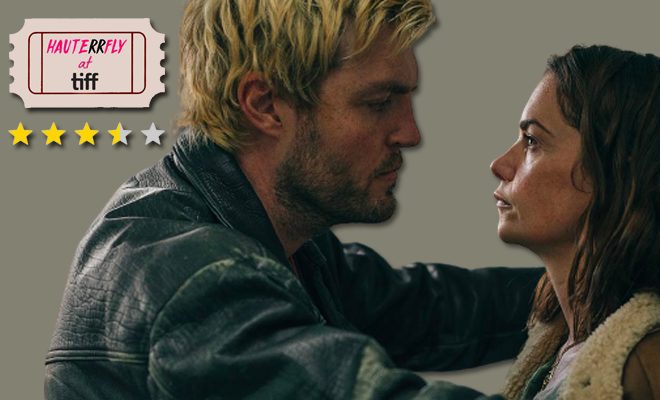 I don’t quite remember what came first. My decision to watch True Things after realising it starred Tom Burke as a quintessential gaslighting fuckboy, or the moment I read the synopsis for the film, which I had a feeling might just incorporate the facets of textbook toxic situationship. For all intents and purposes then, we’re going to go with both. The film, which premiered at the Venice International Film Festival and also screened at the Toronto International Film Festival (TIFF 21), is directed by English film and television director and screenwriter Harry Wootliff. It is an adaptation of Deborah Kay Davies’ novel, True Things About Me, co-written for screen by Wootliff and Molly Davies. It stars Ruth Wilson, Tom Burke, and Hayley Squires. Wilson also is a producer on the film alongside Tristan Goligher, Ben Jackson and Jude Law. And let me just say it… this film was rather intense and sensual while coursing through a problematic relationship, but also cathartic AF!

True Things is set in a drab, seaside town of Ramsgate, where lives Kate. She’s a benefit claims worker with the most boring, routine, uneventful life. Yet, as she scrolls through her Instagram feed, she fantasizes about a lover who’d go down on her on the beach. In walks an ex con, with hair dyed blonde, and with every bit of the swagger that screams ‘bad boy’. One minute, she’s discussing how much time his claim processing would take, the next, she is with Blond (his name is never spoken, only shown on her phone later as Blond) in the parking lot, having a hot, sexy, impromptu romp. And suddenly, it’s as if Kate is alive for the first time.

She soon loses interest in her monotonous life, her job, friends and family as this affair fraught with sex and adventure takes over. Blond’s confidence and charm are perfect tools he employs to fulfil most of Kate’s sexual fantasies, and beyond. But they have another use. Soon he gaslights her, as she tries to navigate the tumultuous ebb and flow of his attention. It’s every bit a toxic, at times abusive situationship, where Blond mostly takes and barely gives, and is downright aloof and harsh when questioned about it. But every time Kate tries to retreat, he pulls her back in with his touch and promises of more adventure. That is, until something changes that pushes Kate to shake out of that stupor that she thinks is love and intimacy but is actually just sex and toxicity.

Kate’s story felt personal in so many ways because modern dating is pretty much this—getting into bed with strangers you barely know anything about, and looking for emotional intimacy in sexual encounters that fleetingly make you feel alive.

Another reason why it felt so personal, and what instantly reeled me in (yes, apart from Tom Burke) was Wootliff and cinematographer Ashley Connor’s camera making me hyper aware of Kate’s every emotion. Always going in close, right into Kate’s personal space, so you could see all that she was feeling—every touch, every heartbreak, every high when she was intoxicated. It’s like you’ve been transported into her mind. Or, scratch that, you’re this eavesdropper, who is listening in, and wants to tell Kate to go live her life, but also hold her back from making stupid decisions in all that sex-fuelled haze. It’s all pretty intense, pretty sensual and sexy, and both Ruth Wilson and Tom Burke have great chemistry.

Which brings me to an important question that I would like to submit to film discourse.

Okay, what is it about Tom Burke? And why is it that every time he is on screen, you and the female character opposite him cannot resist his allure, despite a strong whiff of his Eau de Bad Boy? Ever since Joanna Hogg ‘sThe Souvenir (a film that I have the most unpopular opinion about, let’s not go there), Burke seems to keep popping up in characters that morph into very unhealthy, obsessive attachments for the women who love him, but then somehow end up being conduits of change and some form of transcendence for these women. I mean, even in his most recent stint on the romance anthology Modern Love Season 2, in which he plays Minnie Driver’s deceased husband, he is still hanging out in her life, a ghost that though a pleasant one, does not relinquish his hold on his lover easily.

So, I ask again, what is it about Tom Burke? His Blond is so effortless, so smooth that he goes down nicely even when you know he is a toxic man holding a woman down in an almost emotionally abusive relationship. Add to that Ruth Wilson’s rather on point portrayal of the clumsy, vulnerable Kate, who is an easy target for men like Blonde—single, own apartment and car, living alone, lonely, craving attention….

Which brings me to my issue with True Things, which is the absence of any backstory for why Kate has become the way she is. Clearly, there are some issues here which make her emotionally vulnerable and susceptible to someone like Blonde charming her into a toxic relationship. There are little things about her—from her sparse eating habits to her lack of interest or ambition in her work—that indicate some underlying issues, which are then never fully revealed. It would’ve been interesting to know why she is the way she is, which might explain how she gets this far drawn into a toxic relationship. It would also then add a shade more meaning to her ‘awakening’ and emerging out of the relationship in the climax, which once again Ruth Wilson plays out really well.

True Things is and intense portrayal of a classic toxic situationship a woman who gets drawn into, and then eventually finds a way out of. Tom Burke is perfectly cast as Blond, and Ruth Wilson is damn convincing as Kate. Despite there not being much of a ‘plot’ per se, and a strictly partial character journey, director Harry Wootliff manages to draw you into Kate’s world, relate to her obsession with Blond but at the same time, desperately want to hold her by the shoulders and shake her out of it. If you’re woman who has been out on the modern dating scene and dealing with situationships, flings that made you catch feelings, gaslighting, and so on, you’re bound to empathise with the protagonist.

Tribeca ‘The Justice Of Bunny King’ Review: Essie Davis Is Indomitable In This Heartbreaking But Hopeful Struggle Of A Mother