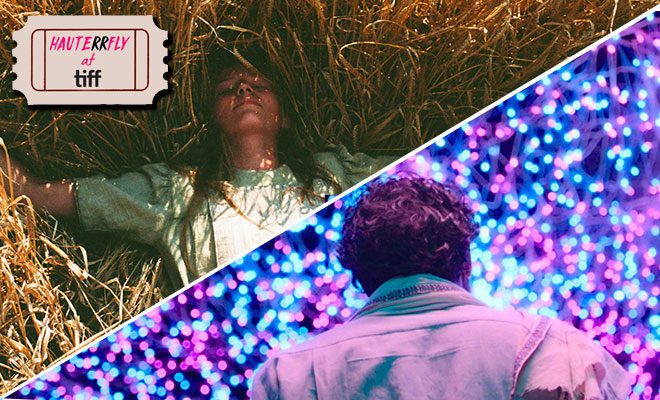 The Toronto International Film Festival is on in full swing, and I am one of the many who’ve gotten a chance to cover it remotely. Though promoted as a hybrid festival because of the pandemic, some of the star titles are unavailable to press outside Canada. So you won’t find a Dune or Last Night In Soho review here. But what you will find is conversation around some truly remarkable movies that came from women filmmakers or that told stories about women’s lives. Since religion is one of the biggest threads that ‘bind’ women to customs, rules and dogma, I want to begin my TIFF reviews by talking about two of my first viewings from the festival lineup: As In Heaven, a film by Tea Lindeburg and Dug Dug, a film by Indian filmmaker Ritwik Pareek.

Both films are their respective director’s debut features, and both serve as stark commentaries on themes of religion, blind faith and superstition, and how they tend to impact human lives, sometimes for the best and sometimes for the worst. And how, most of us our afraid to see this negative side because of the fear that we might be struck down by some divine retribution, or that we might be ostracised from the society/community we live in for our dissent.But apart from thematic similarities in their stories, both As In Heaven and Dug Dug also have another thing in common. They have very distinct visual styles. 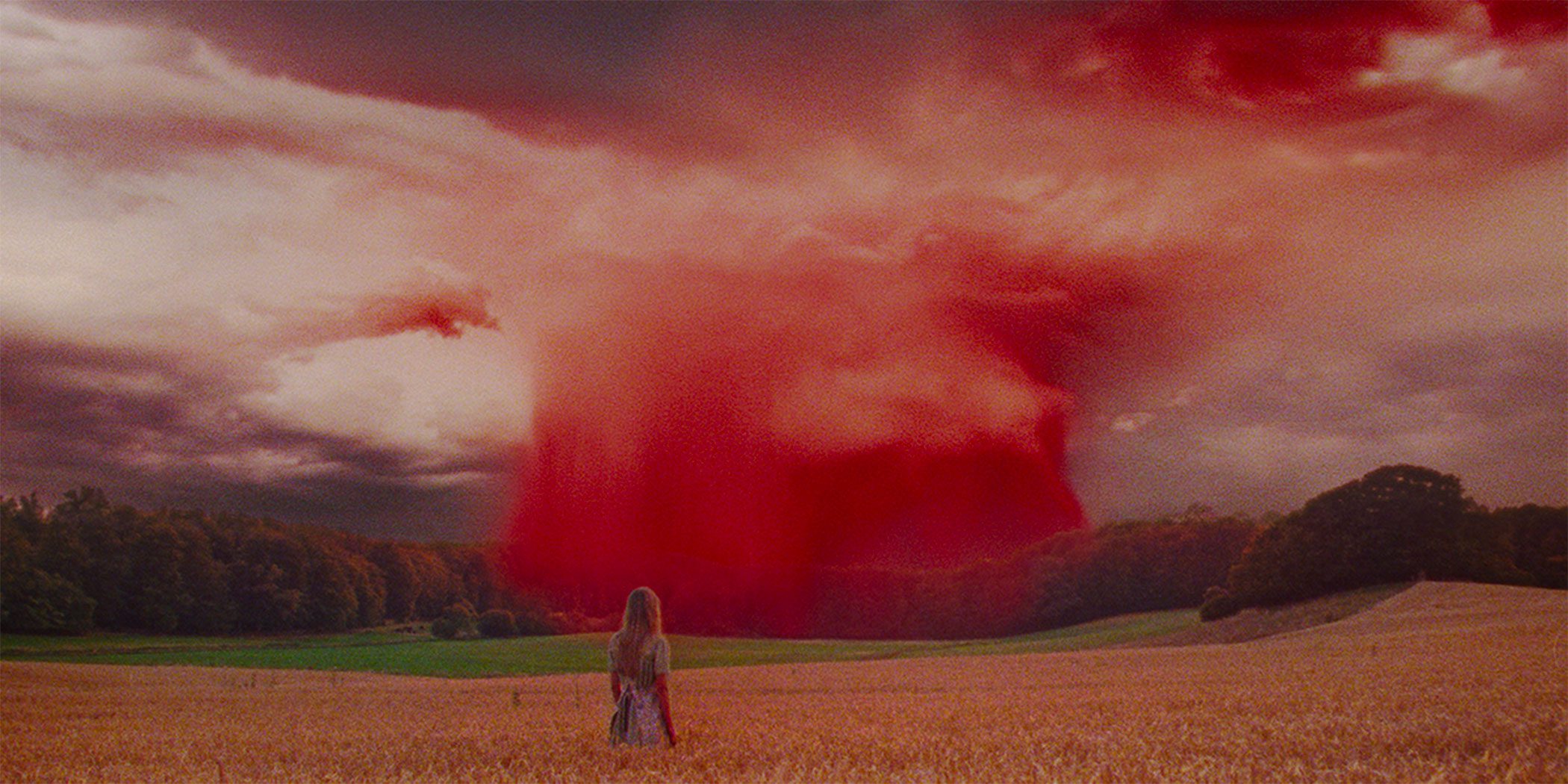 As In Heaven is set in 19th century rural Denmark, where we meet Lise, a young teenager from a well-to-do farming family, who is all set to move out of her family farm to attend school. She’s encouraged to pursue this dream by her mother, Anna, much to the reluctance of her father, who is more or less an absentee parent to Lise and her numerous siblings. Lise is excited at the prospect of leaving, but her romantic attachment to one of the farm boys and her mother’s complicated pregnancy become obstacles that might result in Lise having to give up her dreams.

The story is told over the course of a day. It begins with Lise on the precipice of being a grown woman, with her impending education. But as the day progresses, her mother Anna goes into painful labour, which now requires Lise to be a grown up of a different kind, as she comforts her siblings while worrying about her mother. At the helm of things is Old Sine, the family’s housekeeper, who refuses to summon a doctor to assist in the delivery, and puts her faith in prayers and the visions that Anna has had—if a doctor visits, she will die. Anna too, to a certain extent, believes in what they call ‘poor man’s medicine’, and leaves her fate in the hands of God. The result is a difficult night where every person’s, particularly Lise’s faith and her motives, get tested.

With As In Heaven, Tea Lindeburg tells a story that though set in a different period, is still so relevant today. As we ourselves face a difficult pandemic, we’ve seen that there are those who’d still put their faith in superstition and religion to save themselves than modern medicine, even though the latter offers concrete results (in most cases) that we have access to, unlike the film’s time period. In the film’s case, the family though well-off, is not completely an elite one and therefore, ignorance is their chief affliction, but not one of their doing. However the real cyclical nature of this affliction comes across when you realise that Lise, who was almost on the verge of embracing enlightenment, and thereby forsaking the ignorance that plagues her mother and mother’s mother, is dragged back into the dark, because of the events that stem from this ignorance. 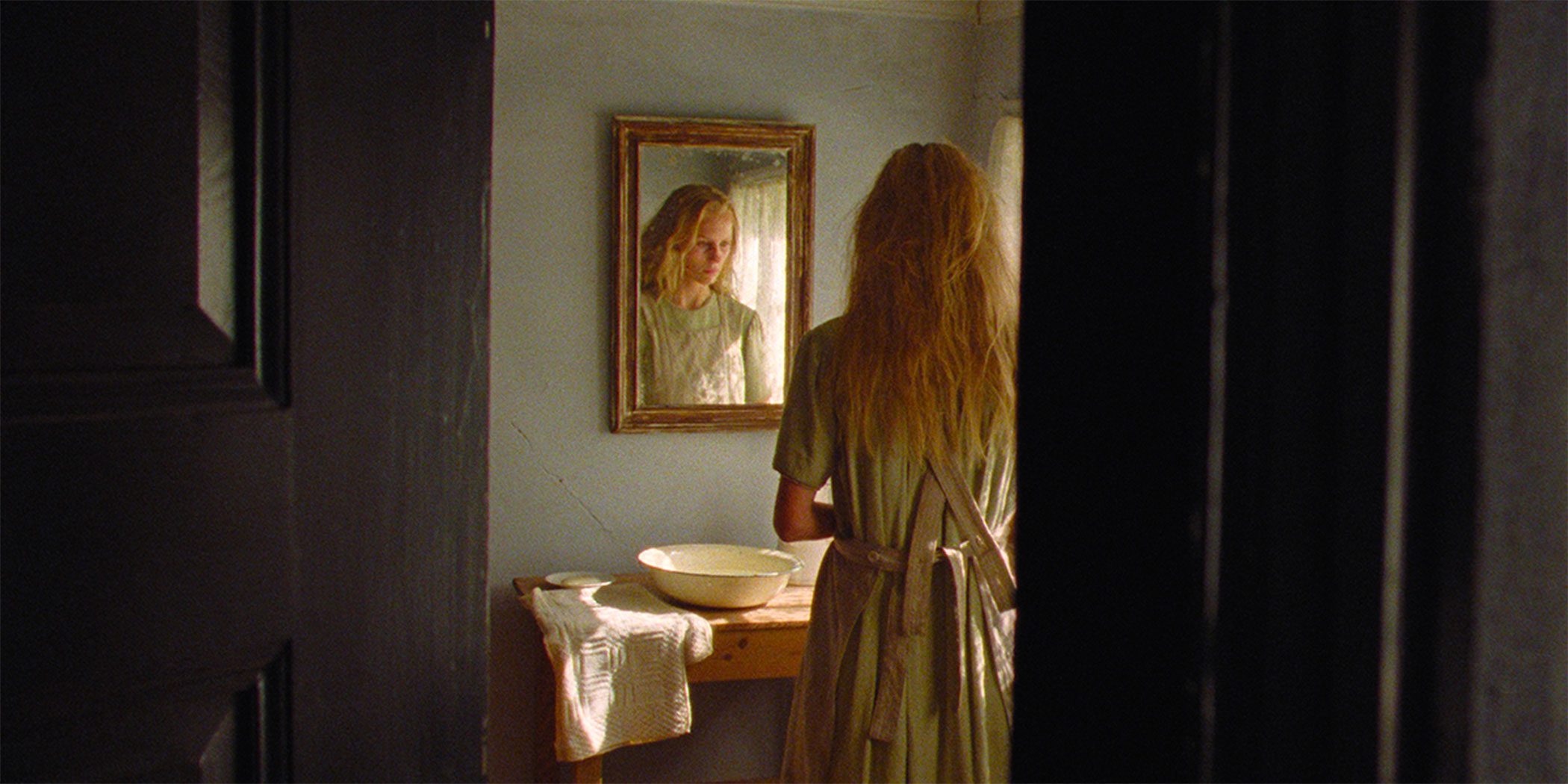 Then again, there’s also a loss of ignorance as there is a loss of innocence. As In Heaven is, in many ways, a coming-of-age story, as not just Lise but even her siblings and her cousin sisters face the tragedy of death so close up. We see them taking things in fun and play, innocent and unknowing of how their mother’s life is hangs by a treacherous thread that might be too late to repair. As always, it is the girls, older and wiser because ‘girls mature faster’, who decide to investigate, and who witness firsthand the bloody pains of childbirth. We see how ignorance was actually protecting their innocence, and their blind faith and superstition was giving them strength to while away the storm. Alas, as all of it shatters for Lise, we see her emerge as a woman, both literally, since she is now the woman of the house after her mother’s passing, and metaphorically, since she has witnessed childbirth, which is her future, and will probably soon get to act on her romantic desires, now that she isn’t going away for her education.

As macabre as it may sound, I also liked the scenes that dealt with death and conversations around it. In one particular scene, where Lise and her sisters veer into discussing the pros of their mother passing are just one of the many examples of how humans weirdly process such situations. It also plays well into the whole them of maturity, as we see the realisation dawn on them that not having their mother around would mean an end to their childhood, and that it is not good to talk like that about someone’s who dying.

As In Heaven feels deeply moving and poignant, made so all the more by Marcel Zyskind’s cinematography, which moves in closer to capture the expressions of Flora Ofelia Hofmann Lindahl, who puts forth a pretty convincing Lise. The scenes where Lise has visions of her own or when she and her cousins are traipsing across bridges to and from  As In Heaven is definitely an engrossing watch, with lots to takeaway as it bleeds relevance to our times.

This film, which is written and directed by one of our own—Ritwik Pareek (born in Jaipur, currently in Mumbai)—came highly recommended from other reviewers who had caught it at earlier festival outings. I made it a point to not read anything at all about it, because come on, I was going to watch it, of course! But I wasn’t prepared for just how impressive the filmmaking style would be and how different it would feel from other films I’ve seen on this subject come out of India. The film stars Altaf Khan, Gaurav Soni, Yogendra Singh, and Durga Lal Saini amongst others. The cinematography is by Aditya S Kumar, edition by Bijith Bala and sound design by Siddharth Dubey.

Dug Dug is a satire on a theme that India needs a million more satires on (and that still wouldn’t be enough)—blind faith and superstition, and the often inexplicable power of faith. But for such a heavy subject, this stylised satire lets its visuals do the talking, and actually resorts to very minimal dialogue, which I consider a feat.

The film begins with a 40-year-old alcoholic, Thakur, who is drunk-riding his motorcycle on the Indian highway. At least we are familiar with the driving on our roads; I can’t imagine how the foreign audience must’ve taken it, literally with their hearts in their mouths, at that entire sequence that made for quite a beginning to the film. Again, barely any dialogue for these first few minutes, and yet what an exhilarating experience it is! The bright lights, almost neon like, add a rather trippy quality to the whole film, as if it were happening in a whole new dimension where magic was real. And there’s a nifty little nod to magicians too!

What happens next is an accident that kills Thakur, and jumpstarts a series of events that lets the cops, and eventually the villagers believe that Thakur’s spirit inhabits his motorbike. The motorbike is then literally enshrined at the accident spot, as rumours spread of the bike’s ‘divinity’. Pretty soon, the locals line up, bringing Thakur’s favourite treat—alcohol—as offering to the spirit, in exchange for the spirit granting their favours. And eventually, Thakur Sa becomes a full blown deity, with a religion around him, and near fanatical devotees who will vouch for their faith. Oh, where have we seen this before, eh? 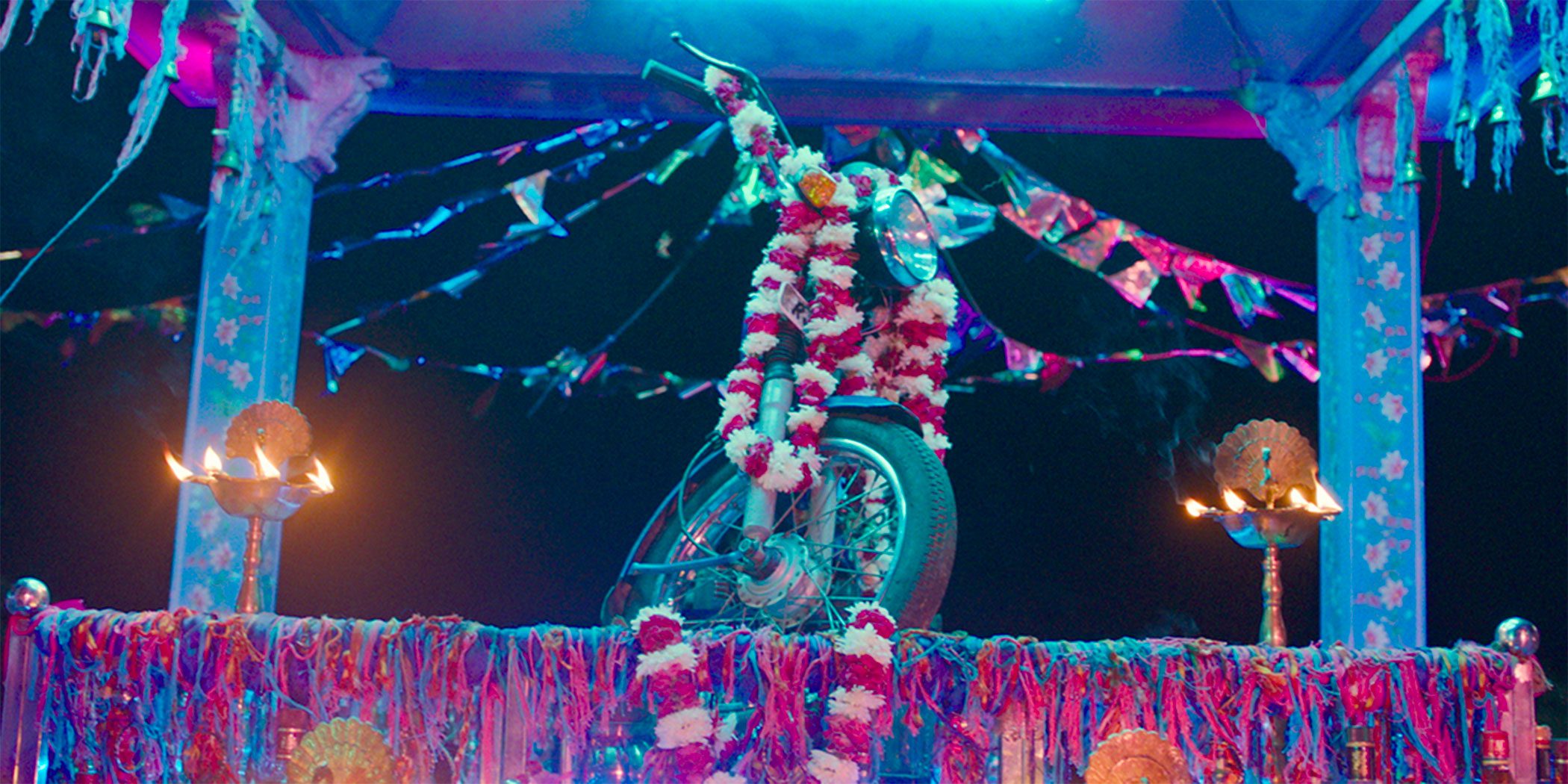 Director Ritwik Pareek was inspired by the stories he heard and the temples he visited in remote Rajasthan villages with his grandmother, during his childhood. And he very authentically manages to capture the fervour and overzealous devotion that is roused in India by that which we cannot explain. To see that we Indians love to deify things is an understatement; for us, even our cricket players and movie actors are gods. But if you think deifying a motorcycle and its dead drunk driver is far-fetched, you’re forgetting that scene from Rajkumar Hirani’s PK, where a random stone staged as a shiva linga outside a college gets a stream of devotees who have no clue of its non-divine origins waiting to offer prayers.

And yet, the fact that most superstition is born out of incidents that inexplicably end up favouring those with faith still remains an astounding phenomenon. It’s something which is amusingly highlighted in the film’s climax, involving a woman’s unshakeable belief that Thakur Sa granted her the child she finally had, and her husband’s journey from denial to absolute faith.

One of my favourite things about Dug Dug is how Pareek has managed to embed so many clever satirical nods in the film visually, like the magician on the billboard, or the paintings in the Thakur Sa temple, and so on. The other thing, of course, is the music, by Salvage Audio Collective (they scored Gully Boy too, remember?) and cinematography, which favour a very vibrant colour palette that is so India, and yet so different than the quintessential portrayals of our country. All of it supplements the satirical humour in the film’s writing. In fact, if you ask me, the entire film feels like some grand epiphany that you’d have on some substance trip! But one that you’d remember vividly after.

As for the name, Dug Dug, I’ll let you guess what it’s satirical meaning is! 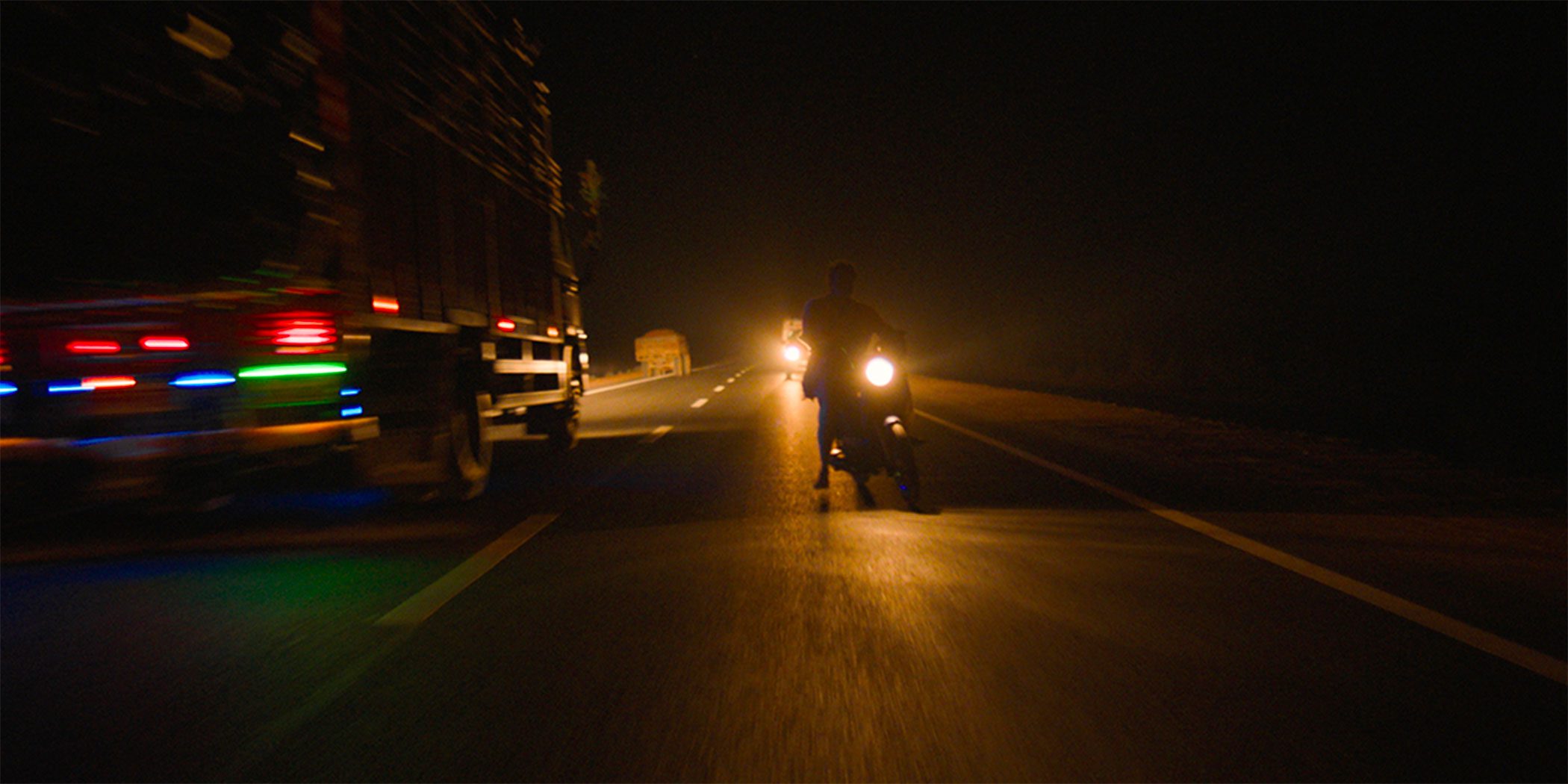 Verdict: As In Heaven and Dug Dug are pertinent commentaries on religion

What are the odds that of the titles available to me, I chose to watch As In Heaven and Dug Dug first, consecutively? Should I call it blind faith in fate or divine intervention? Ha!

As In Heaven and Dug Dug both dealt with themes that I personally, as a student of philosophy, am deeply interested in and have strong opinions about. But I think it had to be the filmmaking styles for me, the deeply personal one of Tea Lindeburg and the stylish, vibrant, eclectic one of Ritwik Pareek, that were the highlights for me. I am not too sure when it would happen for As In Heaven, but I do hope Dug Dug finds its way to Indian theatres or one of the popular OTT platforms where it can be watched by everyone. God knows (pun intended), we need more satires on our obsession with religion!

Here’s Why Marvel’s Eternals, Directed By Chloé Zhao, Is A Pretty Big Deal For Women In Comic Book Movies