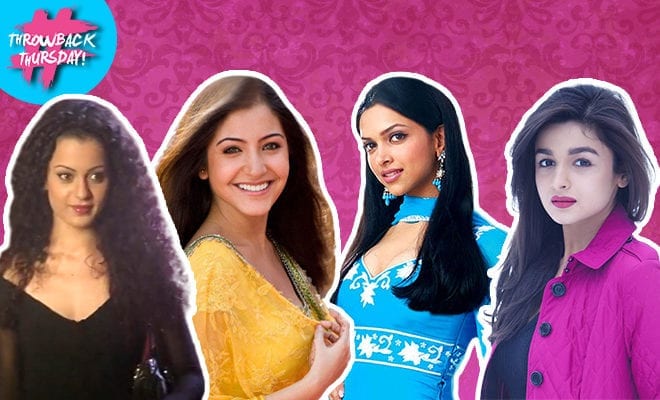 Throwback Thursday: Bollywood Actresses Who Had The Best Debut Films

The thing about Bollywood Debut films is that when you first see these actors, you don’t know how far they will go in their career. Several actresses had lukewarm debut films but later in their careers delivered power-packed performances, which helped them climb the ladder of success. You know, like Priyanka Chopra, whose first film was The Hero, which nobody remembers. But look at where she is today! Even Kareena Kapoor’s first film didn’t do justice to her true potential. Let’s not even get down to discussing Katrina Kaif’s debut!

However, there are actresses who gave superhit debut films but didn’t manage to fly much ahead in their acting careers. I mean, it’s fine. All of us have a different path, different priorities.

Juhi Chawla debuted with Qayamat Se Qayamat Tak, alongside Aamir Khan and stole hearts overnight with her wide-eyed, innocent-girl charm. With this film, she became the first-ever holder of the Filmfare Best Female Debut Award. She evolved from portraying the roles of a young, naïve girl to a confident, poised woman, and till date, her vivacious smile steals hearts!

It is not every day that a movie releases and the newcomers in it become an overnight sensation. Bhagyashree had that opportunity with Maine Pyar Kiya as she received appreciation not just from the audiences but also from critics for portraying Suman. Even though she didn’t pursue acting later, she is still fondly remembered for her iconic character.

After being dropped from a few Bollywood films and having turned to the south for roles, Divya Bharti finally got her big break in Vishwatma alongside Sunny Deol. In fact, that year, that is 1992, 12 of her films released including Deewana also starring Rishi Kapoor and Shah Rukh Khan, and Dil Aashna Hai starring Shah Rukh Khan. Her untimely demise was shocking for the entire country and she is still remembered for her being enigmatic!

Brimming with confidence, this dimpled cutie made her debut with Dil Se followed by Soldier released in the same year. With her effortless charm and ease of being in front of the camera, who can tell that this one was a newcomer?

After Maine Pyar Kiya, it was Kaho Naa Pyaar Hai that made its newbie actors overnight stars. Starring alongside Hrithik Roshan, Ameesha Patel portrayed her role as Sonia with much conviction. Her career may not have delivered her many hits but we always remember the firsts, right?

She may have been new to Bollywood but Vidya Balan knew her craft well. She made her Bollywood debut with Parineeta, alongside Saif Ali Khan and Sanjay Dutt. The movie beautifully exhibited love that was flawed, passionate, deep but real. And Balan’s display of a spectacular range of emotions strongly supported the complicated nature of the movie.

Right from her first film, Kangana Ranaut displayed a wide range of emotions with ease. She may have come a long way since then in terms of grooming, both in terms of personality and performance. However, not many newcomers can exhibit such caliber in their first film itself.

It was a dream come true for Deepika Padukone to debut in a film starring Shah Rukh Khan. But her confidence and charm were rocketing as she delivered a stellar performance in this romance drama. It is rare for the entire nation to vouch for a newcomer’s success in the future but fans did for Padukone. Were they right or were they right?

Who knew that the quiet girl in Rab Ne Bana Di Jodi would take Bollywood by storm? Shah Rukh Khan doesn’t always work with newcomers but when he does, the industry is blessed with gems! Anushka Sharma’s role had several layers and she nailed the simple yet complex character perfectly.

When Alia Bhatt made a debut with Student Of The Year, all eyes were on her, and she loved every bit of it! She was like the modern-day Poo in the film and Bhatt may have received criticism early on, but she proved her acting caliber with several powerful performances in her career.