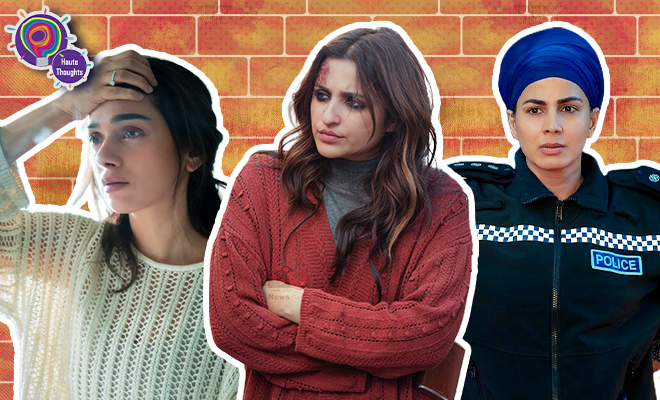 5 Thoughts I Had About Parineeti Chopra’s The Girl On The Train Trailer. Can It Intrigue Those Riding The Train A Second Time?

The films that have released lately have, if anything, weakened the case for Bollywood remakes. And yet, once can’t help but get excited for Netflix dropping the Bollywood remake of The Girl On The Train, helmed by Bard Of Blood director Ribhu Dasgupta and starring Parineeti Chopra. The film is adapted from a 2015 mystery thriller of the same name by British author Paula Hawkins. Within a year of the book’s release, Hollywood had managed to turn it into a film starring Emily Blunt, Rebecca Ferguson, Haley Bennett, Justin Theroux, Luke Evans, Allison Janney, Édgar Ramírez, and Lisa Kudrow. While the film received mixed reviews, Blunt’s performance was much appreciated and she even received SAG, BAFTA and Oscar nominations for Best Actress for it.

Evidently, those are quite big shoes to fill. And my feelings about the film, having watched the trailer that dropped today, are quite mixed. On the one hand, I am excited to see what Parineeti Chopra brings to this role that has plenty of scope to perform. On the other hand, I am a bit worried of the inevitable comparisons to the original film and an actress of Blunt’s stature.

Similarly, there’s this nervous fear too, for someone who has both seen the 2016 film and read Paula Hawkins’ novel, about whether the film will have enough to hold me in. But then again, that’s a good challenge for the film, isn’t it? And who doesn’t love those?

The Girl On The Train also stars Aditi Rao Hydari, Kirti Kulhari and Avinash Tiwary, all of whom are playing characters that are complex and played by some very seasoned actors in the OG.

Here are 5 thoughts I had about The Girl On The Train trailer from Netflix.

1. I’m excited to see Parineeti Chopra do something serious and gritty for a change!

Pari! Pari! Pari! You know she was my favourite thing about Ladies vs Ricky Bahl, only second to Forever BAE Ranveer Singh! That’s how much I enjoy watching Parineeti Chopra on screen. She really is a good actress and I am excited for her to be playing this role that’s nothing like the usual chirpy, bindaas girl she gets to play in YRF rom-coms.

As Mira Kapoor, her character is flawed as hell. And her character’s descent into her obsession with the victim and her life is quite the journey on paper. I’m expecting a kind of Kangana Ranaut in Judgementall Hai Kya vibe but of course less quirky and more intense and dark.

It does look like the makers might’ve changed a few things about her back story from the original source. But then, I could be wrong. Either way, I hope for Pari’s sake that she nails this one! At least her look is kaafi intense!

2. Did the voiceover sound a little off to anyone? No? Just me?

That being said, did Parineeti Chopra’s little voiceover in the trailer sound a little off? I am curious if it is a deliberate choice to sound like that, almost drunk and talking like you’re reciting something you’ve memorised? Like, is that a character trait, because Mira is supposed to be this deeply disturbed jobless alcoholic? If not, and if that’s how Pari is sounding throughout the film, then… erm… we might have a problem.

Also Read: Fate: The Winx Saga Review: Filing It Under Enjoyable But Problematic Because Whitewashing Is Not Cool!

3. I look forward to watching what both Kirti Kulhari and Aditi Rao Hydari bring to their characters

In Paula Hawkins story, the women play a very important role. So I am excited to see if the adaptation has changed anything about these two characters or not. Either way, it’s going to interesting to see Kirti and Aditi’s takes on them!

4. Comparisons with Hollywood’s The Girl On The Train are inevitable. Let’s start with how this trailer has too much redundancy, shall we?

Like I alluded to before, it is going to be difficult to not compare the Bollywood adaptation to the Hollywood one. And I would like to start with the trailer. If you compare both trailers, you’ll notice that while the Hollywood one at least attempts to ‘Show, don’t tell’, Bollywood as always wants to both show and tell.

So we’ve got characters emoting and then repeating the same thing in a dialogue form. Exposition toh I know kaafi hai ismein, but did the trailer have to be filled with so many details about the train schedule and an explanation for Amnesia? And then three different people repeating “remember”? Pata hai, she has forgotten. Toh why do we need so much information overload right away. Jisko story nahi path hoga usko bhi pata chal jayega!

I know it can be hard to make a decent trailer. But then again, is that really so hard? Do we have to tell everything in the trailer itself?

5. I’ve read the book. I’ve watched the movie. Can the film hold the attention of those who’re riding this train for the second and third time?

The general consensus is that once you know the answer to a whodunnit, it loses its appeal. But both you and I know that what actually makes a thriller tick is how we and the characters looking for answers arrive at the answer. In the case of the this film, the real challenge would be to hold the attention of those who already know what the endgame is.

The Girl On The Train is also, at its heart, a story of second chances, as you’ll see most of its characters have skeletons in their closet and are trying to make their way through another attempt of living a life. I also look forward to see how these themes are put across in the film.

The Girl On The Train releases on Netflix on February 26. And I’ve got my ticket punched!

Parineeti Chopra Would Hate For Her Films To Release Online And We Agree. Nothing Beats A Theatre Release