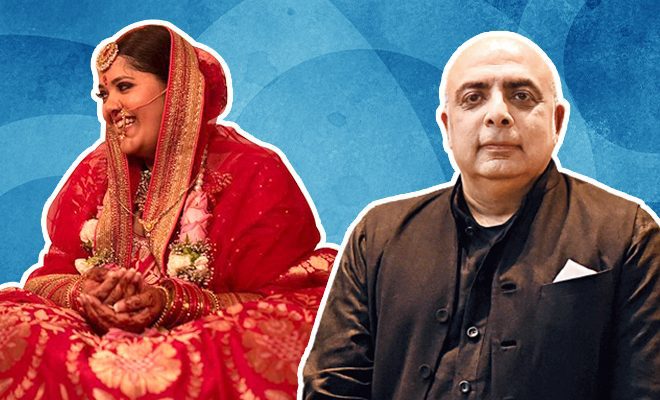 Tarun Tahiliani Responds To Fat Shaming Allegations Against His Bridal Store By Dr. Cuterus. So Umm… Where’s The Apology, Again?

Earlier this week, the Indian fashion scene was abuzz with a conversation around fat shaming brides by bridal wear brands, when they stepped out to shop their lehengas. Kickstarted by a post on Instagram from content creator and doctor, Tanaya aka Dr. Cuterus, and picked up by Diet Sabya, this conversation went on to bring up many names, designer Tarun Tahiliani and even Sabyasachi’s specific stores amongst them. The discourse around the contradiction in the message put out by bridal brands and the judge attitude of sales professionals in their brick and mortar stores even expanded to include fast fashion brands and western wear, suggesting that this is no country for plus size men and women. And now, designer Tarun Tahiliani has responded to these allegations in an official statement.

The designer shared the statement on his Instagram stories, where he said that the brand has done its due diligence before speaking about the incident. He went on talk about a possible size unavailability in the store due to pandemic, and how their response to the client to avoid any ‘misleading’  could not be considered as fat shaming.

Read on his full statement. 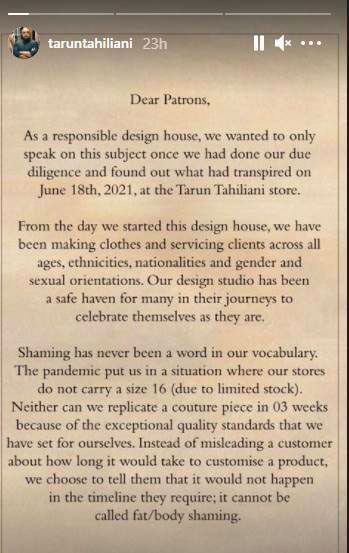 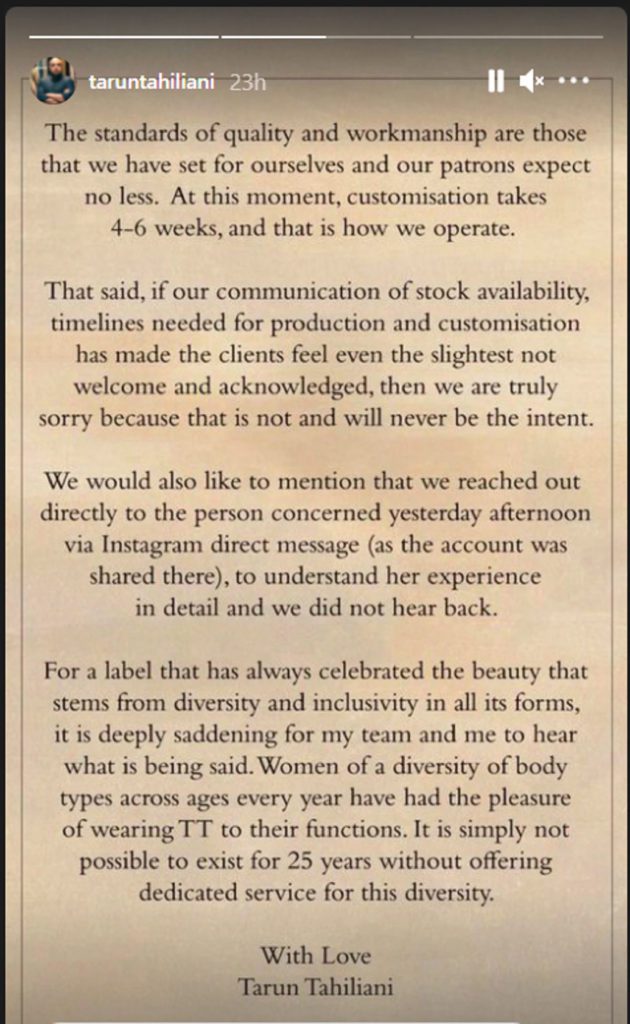 Well, okay, cool. Glad we now have both sides of the story.

Only, it is as we worded it, a ‘response’. It isn’t an apology. And we can’t help but feel a little affronted by the utter lack of even a hint of ‘sorry’ in there. Aise kaise chalega, TT?

And it’s not just us. Dr Cuterus, Diet Sabya and the many others who shared their own two cents on this also agreed that not only was this statement throwing the blame back on Dr Cuterus instead of understanding her intention, but it was also not even showing a hint of an apology. Maybe there was a misunderstanding. Maybe that wasn’t the intention. But a customer felt hurt. You do not get to tell people how they should or should not feel! How much does it cost to simply say, “It wasn’t our intention, sorry, and we’ll do better”.

In response to this half-assed response from Tarun Tahiliani, Dr Cuterus too took to her Instagram stories to dissect the statement, and provide some receipts to strengthen her argument. 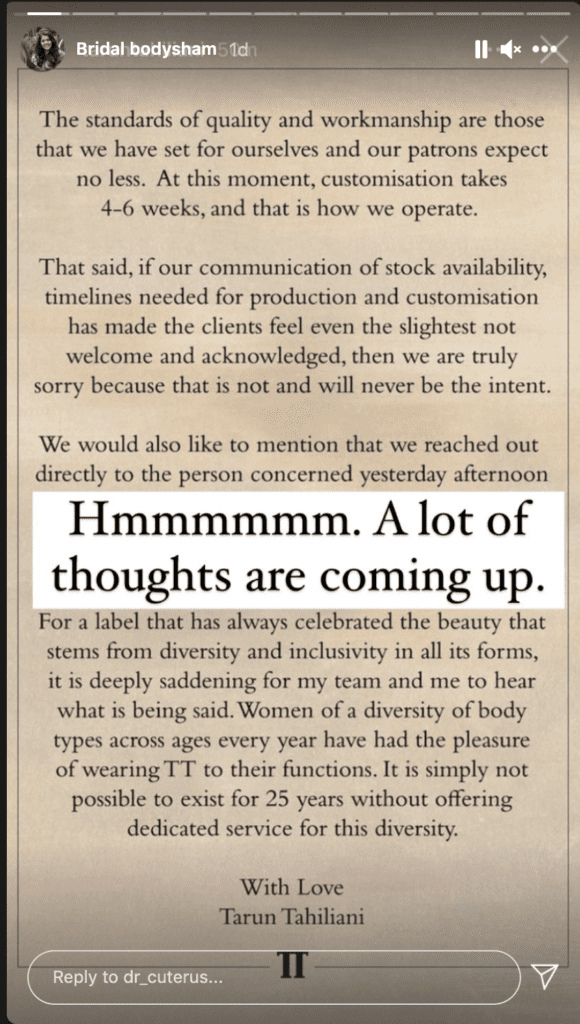 She made it explicitly clear that she had emailed the brand prior to visiting the store, and that her experience wasn’t bad with the overall brand but with one particular store, the Ambawatta one. 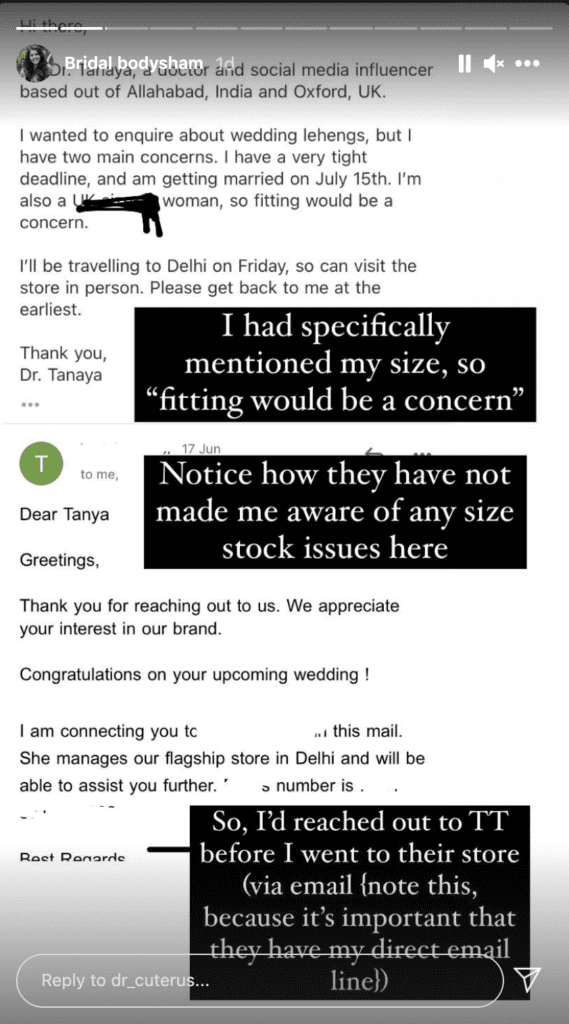 Furthermore, she slammed his claims of doing ‘due diligence’ since they never spoke to her about it before issuing their brand statement. 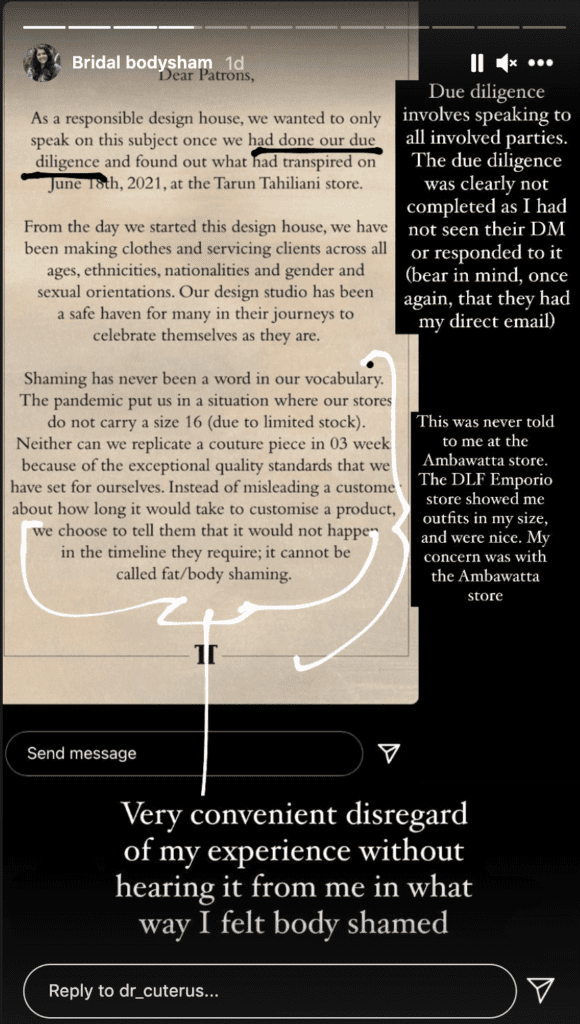 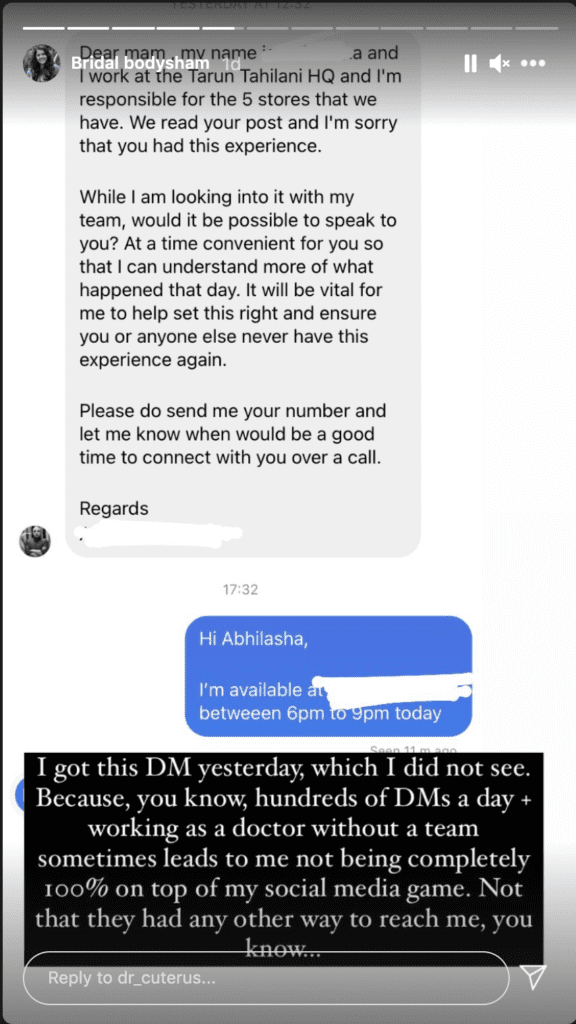 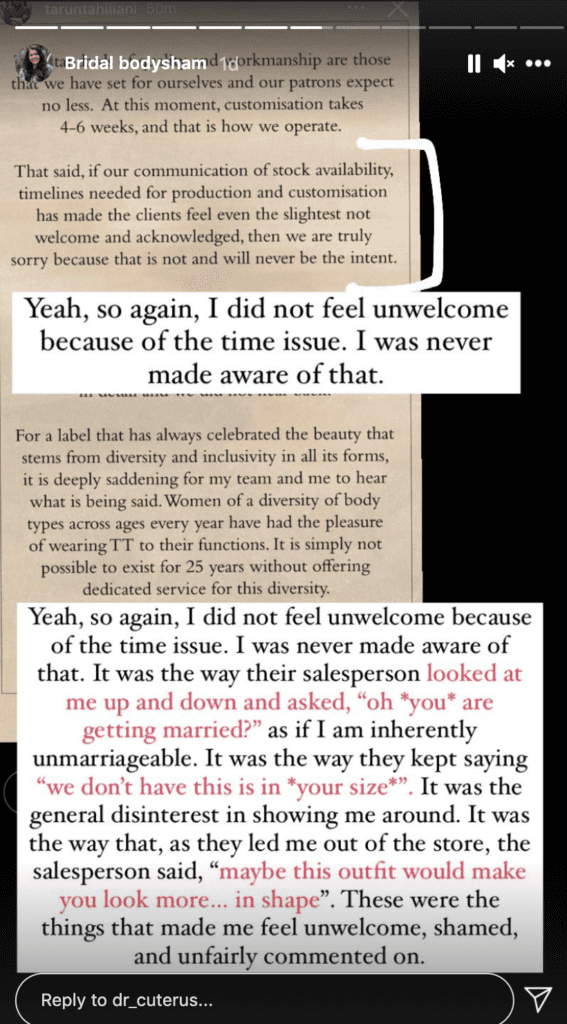 She even called out Tahiliani’s statement for its utter lack of apology and for divulging her dress size without prior consultation with her. 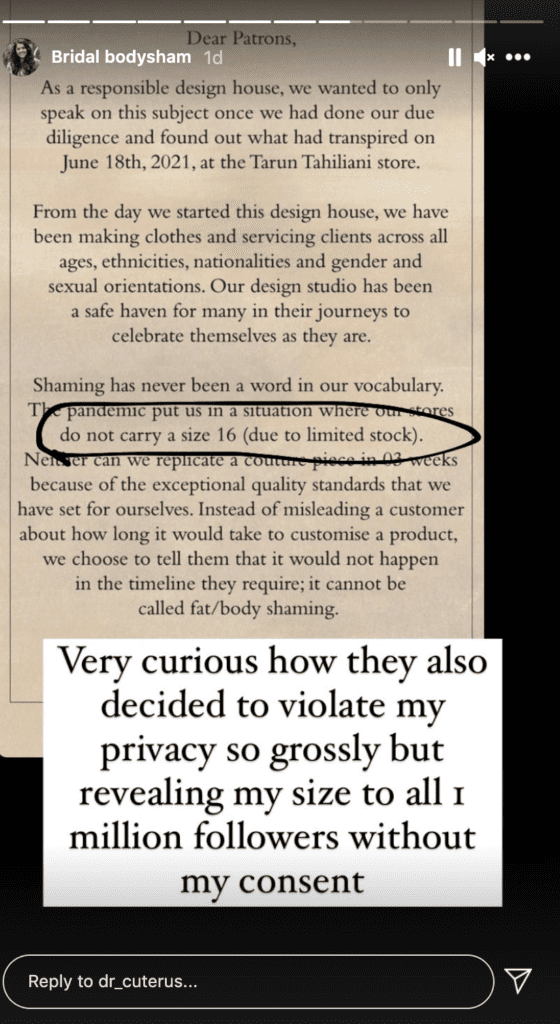 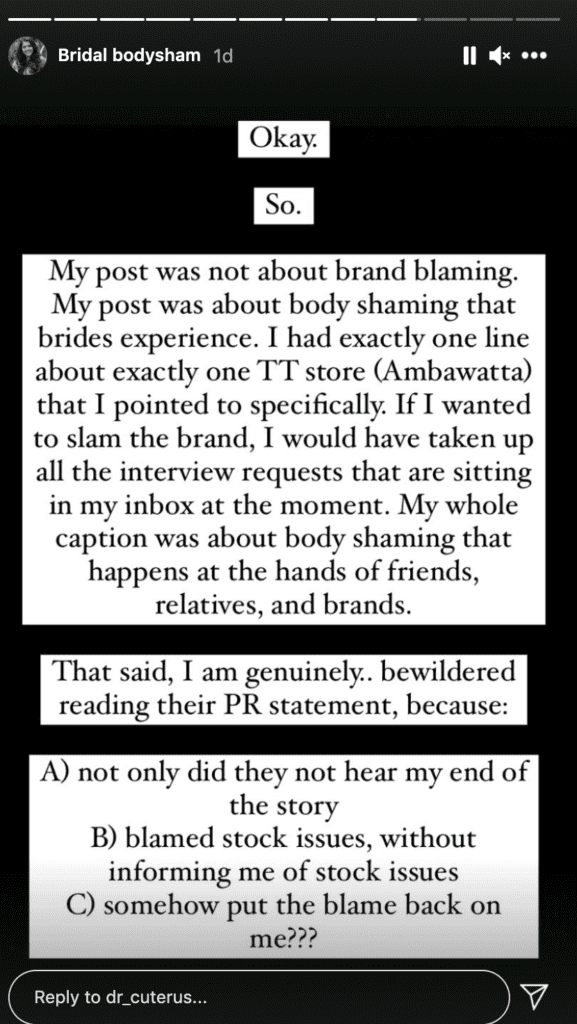 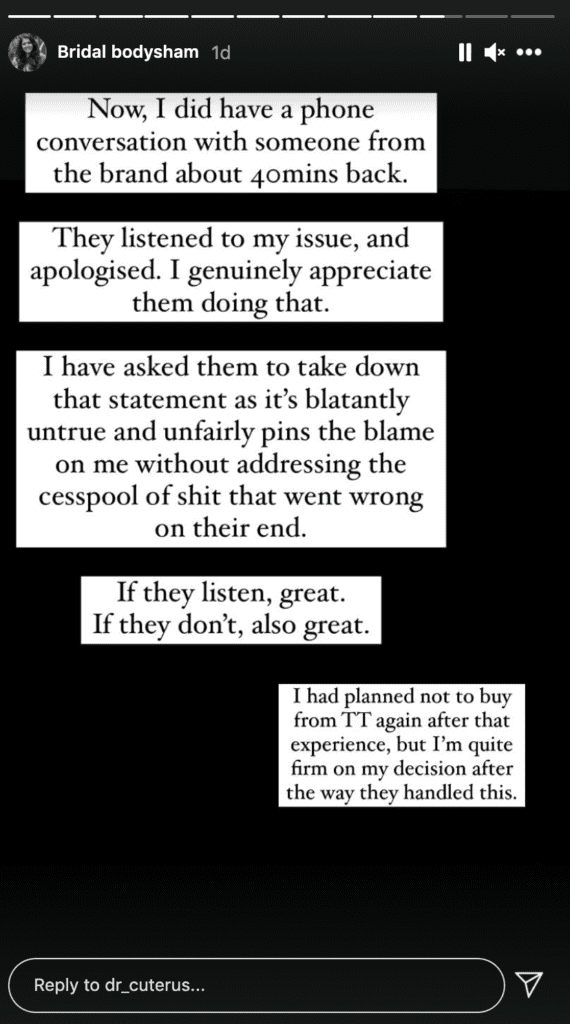 Dr. Cuterus concluded her post with hopes that the incident can create some systemic shift at the enterprise level about diversity and inclusivity that is so lacking currently in Indian fashion brands. 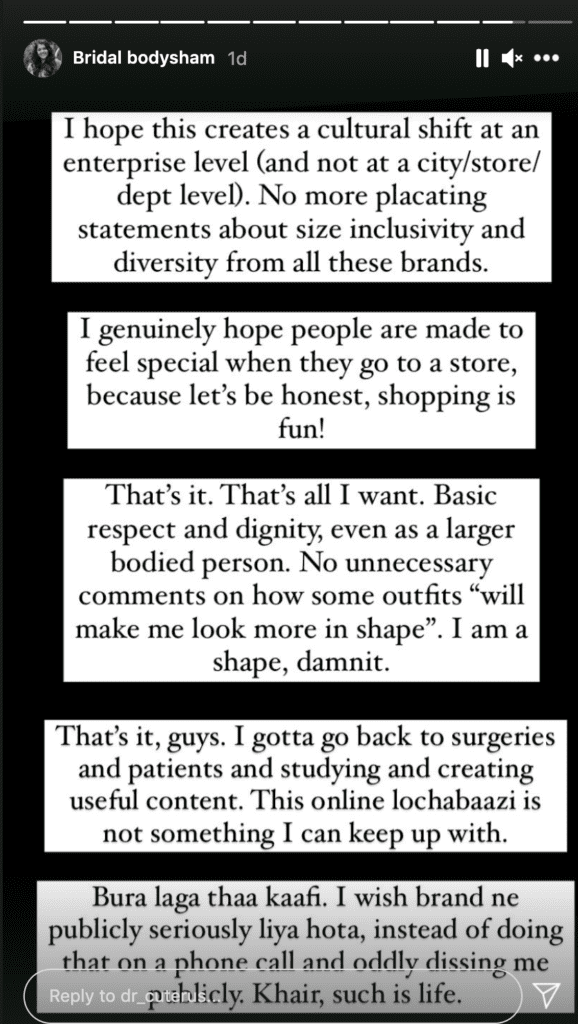 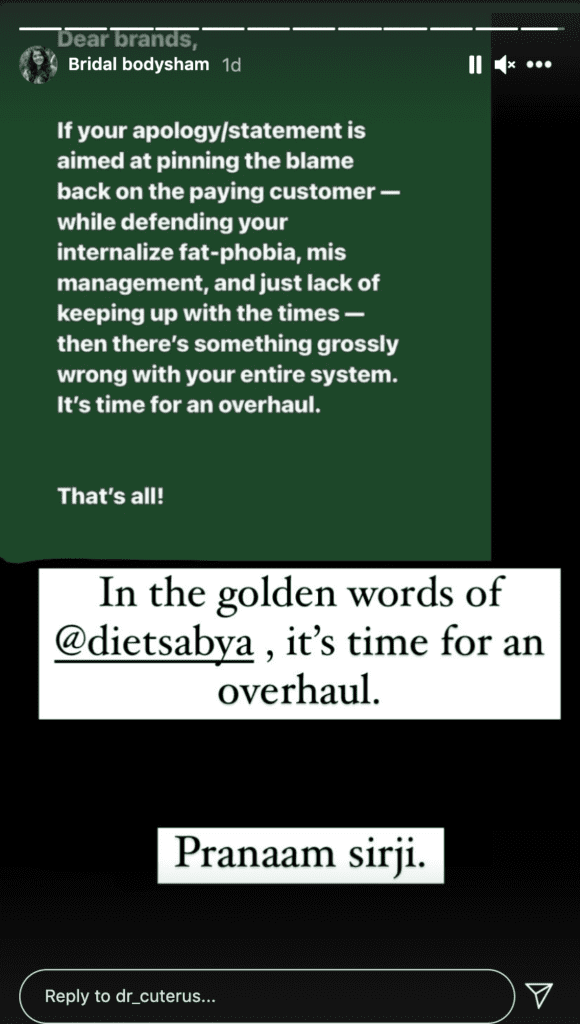 Unfortunately, we all know how this isn’t the first time designer brands have been called out like this. And yet, as if on clockwork, such fat shaming incidents continue to happen.

A girl can still hope. Sigh!

This Bride Ditched Traditional Mehendi And Opted For White Henna To Match Her Bridal Lehenga. We Love This