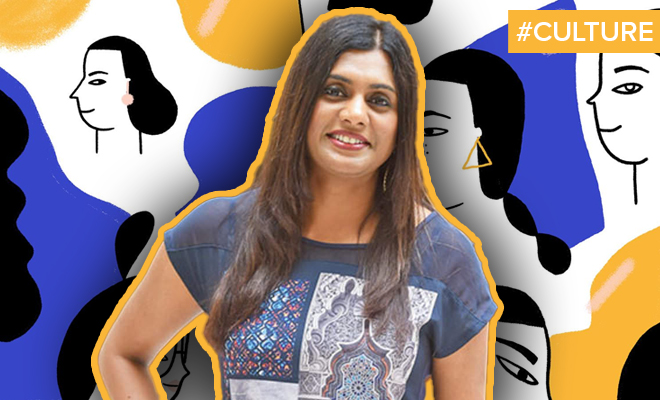 “Stories Need To Become Bigger Than Gender.” Shakuntala Devi Director Anu Menon Talks About Working With Other Women, And How She Answers The ‘Female Director’ Questions

Do you think women tell women’s stories better? I’ve always wondered this, even though I have seen several male authors, artists, filmmakers and musicians do justice to the female voice. There’s something about that shared history of struggle, of being oppressed and repressed, of nursing the ambition to prove their worth that makes female storytellers tell more poignant stories about other women. I could be wrong too, though. Luckily, I had the perfect opportunity to get a fresh perspective on this discussion, when I spoke to Anu Menon, who has both co-written and directed the Shakuntala Devi biopic, the life story of a female math genius nicknamed the ‘Human Computer’, starring Vidya Balan, Sanya Malhotra, Jisshu Sengupta and Amit Sadh.

This isn’t Menon’s first rodeo—she has directed another strong, female-led spectacle, Amazon Prime Video’s Four More Shots Please! and has been known for collaborating with other women on her work. Shakuntala Devi was a remarkable woman, and is now being portrayed in the film by Vidya Balan, another woman whose filmography boasts of strong female characters. But if you take a peek behind the curtain, you’ll see that director Anu Menon managed to gather quite a girl gang behind the camera too.

There’s Nayanika Mahtani, a fellow London resident, who joined Menon in approaching Anupama Banerjee (Shakuntala Devi’s daughter) and then worked on the screenplay with Menon. Ishita Moitra has penned the dialogues, and Antara Lahiri has edited the film. Quite literally behind the camera is Keiko Nakahara, of Tanhaji and Mary Kom fame, who has done the cinematography. As for two of the songs from the movie’s album, they’ve been written by Priya Saraiya.

Was this a conscious choice, having so many amazing women working on Shakuntala Devi’s story or was Menon batting for more representation for her lot on the team?

“TBH, it’s neither. I think we hire the best people for the job and they just all happened to be women! Nayanika and I have been wanting to collaborate on something for a while. With Ishita and Antara I have worked before on Four More Shots Please! We reached out to a lot of DOPs (director of photography) but the way Keiko came back to us! She had mood boards, she had read the script and really wanted to do it. We said yes to the passion more than the person. I wasn’t even looking at the gender.”

“We went for this dinner and there were some 19 women with just one man, our producer Vikram Malhotra, and he said ‘It feels like I’ve come on a school excursion and I am the teacher!'”

But Menon does agree that sometimes, the kind of story does seem to influence the kind of people it attracts.

“I think because of the kind of stories, or because as a woman helming the project I have a vision, the women understand it better and when they come back with their ideas, they resonate more with me. So inadvertently, it becomes a female-driven team. Having said that, none of us say that we need to be an all-female team. We strive for equality. But it has happened so many times now, on Waiting, on Four More Shots Please! that we might be accused of reverse discrimination!”

I mean, I wouldn’t be too concerned. Women are totally having a moment right now and we need more female thought leaders lending their voices to the mix!

Also Read: 5 Thoughts I Had While Watching Vidya Balan’s ‘Shakuntala Devi’ Trailer. Mainly Ki, We Hope The Woman Behind The Legend Is Done Justice To

Bollywood is still in its nascent stages of awakening when it comes to the talent of its women, whether it is filmmaking or acting. While some women filmmakers are repulsed by the distinction of being labelled as ‘women filmmakers’, others have openly admitted to being a little conscious about how their work gets judged in the male-dominated film industry. When asked whether she feels any added pressure because of being a woman filmmaker, Menon dismissed it.

“I don’t. I just make my film and have to be true to my story. I am aware of the politics of storytelling, whether it is female or male. But I always think about the narrative that I am choosing. In fact, I think we’re beyond this distinction right now.”

“Earlier, every time I was asked, ‘How is it to be a female director?’ I’d say things like, ‘Imagine a male director with boobs!’ But now, I think we’ve gone past that now. There are so many of us [female directors] now.”

“I do think we need more female storytellers so there is this diversity of thought. But I also don’t think all female storytellers are similar; I think we all come from different experiences and therefore have different takes on what a female-driven story should be. My take is my take and sometimes even a male director’s take can feel more in sync with mine than a female’s.”

“I think stories should become bigger than the gender.”

Now isn’t that a noble thought? It does sound like utopia right now, and might take a few more years to get a stronghold in Bollywood. Luckily, Anu Menon said she’ll continue batting for her team nonetheless!

“I will always bat for my gender. I will always be conscious of the fact that if I can inspire 10 other women to achieve their potential, I will go out of my way to ensure I participate in it.”

Shakuntala Devi seems like a film worth looking forward to, especially when you hear Menon talk about what a fabulous women she was! Practically a math genius who could easily be a Bollywood star!

As per my calculations, July 31 (the date when Shakuntala Devi drops on Amazon Prime Video) is going to be highly anticipated!