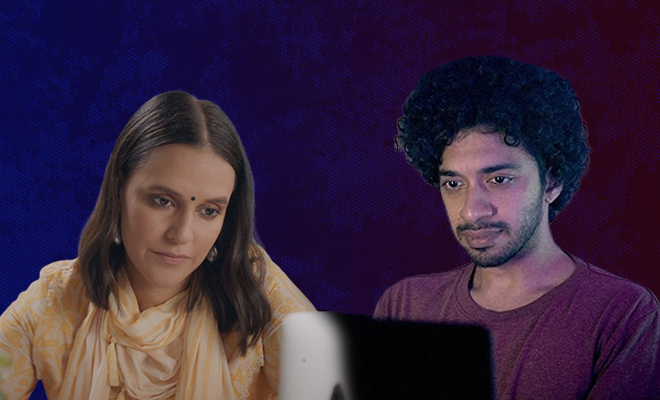 Step Out Review: Neha Dhupia’s Short Film Is A Reminder That The Staying In During Lockdown Wasn’t Safe For Everyone

At Hauterfly, we keep a watchful eye on statistics, because believe it or not, eight out of ten times, they’re not favourable for women. The world was meteorically hit by a pandemic that infected people irrespective of their differences. And even then, the status quo only worsened. From being more likely to lose their jobs and leave the workforce entirely to increased incidences of domestic violence and mental health issues, women were even more unsafe in their own homes. Presenting this uncomfortable reality in a stark way is Step Out, a short film starring Neha Dhupia and Dev Dutt. It is directed by Hridaye Nagpal, who has also written it with Suraj Wadhwa. The two are also its producers, along with Dhupia.

The film, a little over 10 and a half minutes, begins with Krish, a young man presumably in his 20s, talking to someone over a video call. Within seconds, we realise that he is in the middle of a virtual session with his therapist, making it evident that the story is set during the pandemic lockdown. We soon find out that Krish is a budding musician with anger issues, amongst others, that he is seeking help for. Being shut at home without any gigs to play at, with an overachieving sister and a father who constant taunts him about his joblessness, Krish loses talks about a recent incident where he lost control.

Interspersed with their conversation our glimpses of blood, broken glass, and anger. And for a while, we’re made to believe that these are just flashbacks of what transpired when Krish got angry. But little by little, as the camera begins focusing more closely on his therapist’s face, and things begin happening on her end, we realise we ought to be looking in a different place for someone who needs help. Suddenly, the close-up shots of his therapists’ face, the angry person interrupting her work call while she is talking to Krish, and losing herself in deep thought… it all makes sense.

The short film’s title ‘Step Out’ has a dual meaning, just as the film tackles two issues—mental health and domestic abuse. Krish tells his therapist about his desire to leave his house, which at that point, seems like he should absolutely do it. But he also raises an important question—where will he go? And without a job to sustain him, what will he do without his father’s financial support? Especially at a time like this, when the whole world is seeking the safety of their well-stocked and comfortable homes?

His therapist is faced with a similar dilemma. In her case, she probably placed in a better situation to answer the above questions than Krish is. She has a job, and that financial stability allows her at least some leeway to move out of her house and away from a life of abuse, confined in her home. She and Krish both are much more unsafe staying in than stepping out. But can she step out? We’ve seen that even educated women, who are financially independent, have found it hard to move out of abusive, toxic relationships. Plus, the need to not be alone at a scary time like this is another impediment to taking that decision.

Krish;s therapist counsels him to move out. But it’s evident that she understands it—how can she give him the very advice that she won’t follow in her own life?

Verdict: Staying home wasn’t safe for everyone during the lockdown. Some needed to step out.

I think Step Out does a pretty decent job of showing us two very important problems that were rampant during this pandemic induced lockdown. But apart from that, it also managed to, in this short span of time, make you question a lot of other issues that have affected people and changed their lives for the worse. People lost jobs, and while we all wished we could just chill at home all day, watch Netflix and bake banana bread, joblessness can actually trigger or worsen people’s mental health troubles.

Work from home, another buzz word during this past year, always starts a debate. Some say it is good; others disagree. But few are aware that apart from the usual inconveniences fo WFH (like longer hours, less pay, discomfort and distractions), there’s also the reality that for some people, going out to work is the one way they can escape an abusive environment. It doesn’t always have to physical abuse; Krish’s story indicates that taunting and a lack of empathy from one’s family can also drive people to extremes.

Let’s also not forget that many people, like Neha Dhupia’s character, are suffering in silence while still putting up a brave face and showing up to work, virtually. So kindness and empathy from those around us can go a long way.

I think Step Out is an important film to understand the other side of the pandemic, give and seek help, and help people who need it step out of their problems.

Step Out is streaming on Disney+ Hotstar.