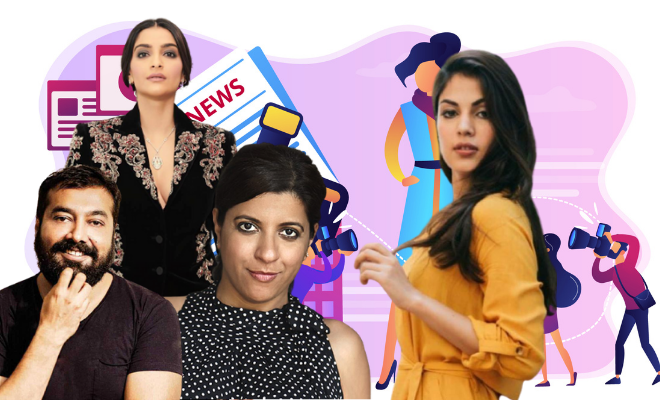 Can I just put it out there for Indian news media that if I really wanted to know about witch hunts, I would just source myself a copy of Malleus Maleficarum and read about it from genuine sources. They didn’t have to give us a live demo with their persecution or Rhea Chakraborty over the sometimes suicide, sometimes alleged murder case of Sushant Singh Rajput. After being questioned by the CBI and the Narcotics Control Bureau, Rhea has been arrested for drug usage related charges. However, the intentional vilification of her for the sake of TRPs by new channels (particularly those with a certain disregard for decibel levels) has forced people to stand up for human decency. Some 2500 people, including Bollywood celebs like Sonam Kapoor, Shibani Dandekar, Anurag Kashyap, Rahul Bose, Kubbra Sait, Alankrita Shrivastava and others, as well as some women’s organisations have signed an open letter addressed to the media, condemning the witch hunt.

The open letter has been published on a Medium blog titled Feminist Voices. It begins by asking Indian media if it’s okay, and what has prompted it to focus on a one-sided narrative that labels a woman as criminal even though she remains not guilty in the eyes of the law.

We, are worried about you. Are you feeling ok?

Because, as we watch your witch-hunt of Rhea Chakraborty, we cannot understand why you have abandoned every professional ethic of journalism, every tenet of human decency and dignity and chosen instead to physically assault a young woman with your camera crews, endlessly violate her privacy and work overtime on false accusations and moralistic innuendo for a drama of ‘Rhea ko phasao’.

You have been obsessed with creating only one narrative: a young woman who makes her own decisions, who lives with her boyfriend without marriage and who speaks up for herself instead of acting like a damsel in distress, has a morally dubious character, and is to be considered a criminal at any cost, without investigation, without the process of law and respect for her rights.”

Also Read: The Gleeful Celebration Of Rhea Chakraborty’s Arrest Shows How We Have Messed Up Priorities

The letter continues to beseech Indian media to accord Rhea Chakraborty the same dignity that it has accorded other male Bollywood celebs in the past who were embroiled in cases, some of which were far worse than Rhea’s.

“We know you can be different — because we have seen you be kind and respectful to the Salman Khans and Sanjay Dutts of this world, urging us to think of their families, fans and careers. But, when it comes to a young woman who has not even been proven to commit any crime, you have assassinated her character, egged an online mob on demonise her and her family, fuelled wrongful demands and called her arrest your victory. Victory over what? Young women daring to make their own lives in a society that grudges them their freedoms?”

Think of Bollywood's male stars, arrested for possession of cocaine, found with weapons, tried for culpable homicide. But were they ever hated like #RheaChakrobarty by our TV mobs? No, because in India we love to hate our women. I write in @washingtonpost https://t.co/yWs9FraIPj

Also Read: #SorrySara And #SorryRakul Trend After Conflicting Reports Of Drug Use Do The Rounds. Why Have No Actors Names Have Popped Up?

One of the biggest complaints against media’s portrayal of the entire Sushant Singh Rajput case has been its focus on the conspiracy theories and the murder angle, and thereby a trivialisation of the actor’s mental health struggles, which were prima facie cited as the cause of his suicide. The letter goes on to call out this lack of empathy, and the kind of message this sends to the young men and women in India—that mental health does not matter, and that any woman how does not fit society’s conventional standards of ideal deserves to be abused, trolled vilified and blamed for the bad life choices of the men in her life.

“Instead you chose to trivialise depression and perpetuate the most regressive stereotypes about mental health. Why? Just because Rhea Chakraborty took her boyfriend’s mental health seriously? Why don’t you want to look at it seriously? Why do you not want to acknowledge that India accounts for one third of female suicides in the world — and that family violence and social ostracism is a major reason for their suicide attempts? What are you hiding, news media, who are you protecting when you don’t confront these real truths of our society? Is it the callousness inside our ‘simple’ families and the cruelty of our society to anyone who is different, which you have enacted yourself in your character assassination of a young woman? We see which side you are on — it is not the side of a neutral viewpoint, not the side of fairness and justice, but the side of social violence and control.

Your pulp fictions have threatened both, the vulnerabilities of women and the fragility of mental health. And you have sent out a message to every woman in this country– and to their potential attackers — that if she does not stay within the most restrictive limits she is fair game for abuse, molestation and violence.”

This society , this voyeuristic world of Republic consumers , all those and there is a whole lot of them who have been the cheerleaders of this witch-hunt , all propagator of lies, I feel sorry for you. For the day the truth will come out and you will be ashamed of yourselves.

Also Read: Ankita Lokhande Asks Why Rhea ‘Allowed’ Sushant To Do Drugs. Why Is A Woman Being Blamed For A Grown Man’s Choices?

The open letter ends with a direct petition to the Indian news media to call off the witch hunt, and hunt for real news and facts instead of women.

“We write to ask you, the news media, to stop this unfair witch hunt of Rhea Chakraborty and to stop fuelling moral polarities of good women to be deified and bad women to be crucified which endangers all women.

We write to ask you to do the right and responsible thing. Your jobs. Hunt news, not women.”

The letter ends with the names of its 2500+ signatories, which includes Bollywood actors, filmmakers, screenwriters, theatre personalities, social activists, social media influencers, and some 60 organisations that support women and their causes.

Hunt news, not women. A powerful statement, and yet how many will follow through?

11 lakh pages to keep #UmarKhalid in jail, hundreds of WhatsApp chats to find out what #RheaChakraborty was smoking, but no record of Migrants who died during the biggest tragedy of the world in 21st century.

What’s even more disturbing is that at this point, even if the news media channels do stop their witch hunt, what about the match that they’ve already lit? The factions, either politically motivated or simply misogynistic, already have found the war cries under which to rally. So how do we stop that fire from spreading?

Also Read: This Thread On Reddit Shared All The Takeaways For A Woman From Rhea Chakraborty’s Case. It’s Painfully Accurate